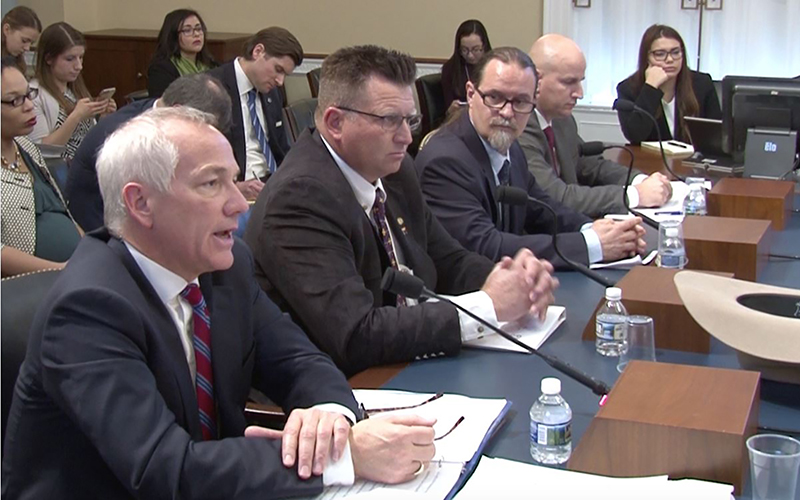 Witnesses, from left, Andrew Arthur, Dan Bell and Scott Nicol testify to a House Natural Resources subcommittee on the impact that environmental regulations have on border security and whether those regulations should be eased. (Photo by Ariana Bustos/Cronkite News) 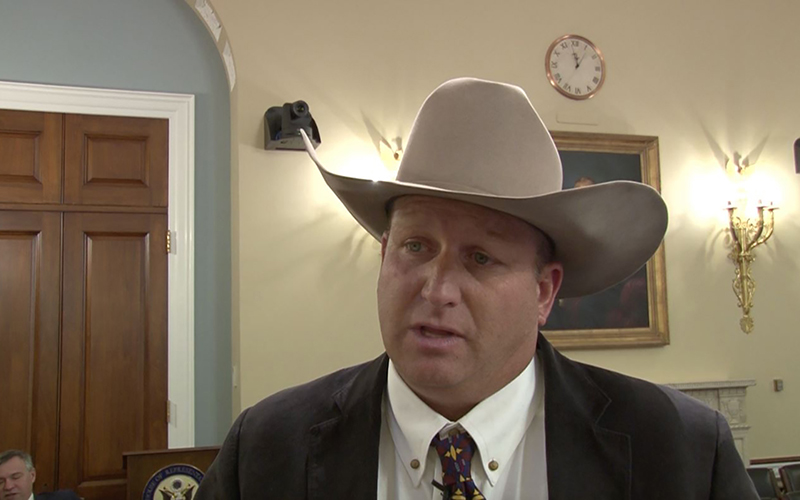 Nogales rancher Dan Bell said illegal border crossers leave “tons” of trash on his ranch, creating an environmental hazard he said could be helped by reducing environmental regulations so Border Patrol agents are free to do their jobs. (Photo by Ariana Bustos/Cronkite News) 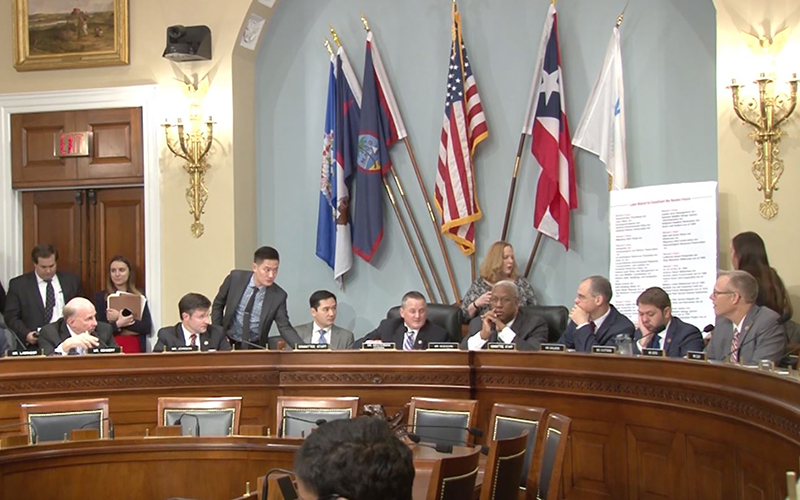 WASHINGTON – Nogales rancher Dan Bell told lawmakers Thursday that the best way to help the environment at the border might actually be by removing environmental regulations that hinder access by Border Patrol agents.

Bell, one of four witnesses at a House Natural Resources subcommittee hearing, said the tons of trash left behind by illegal border crossers demonstrate the unintended consequences of the regulations.

“The trash left behind by illegal border crossers is a huge problem,” Bell said. “We have literally picked up many tons of discarded duffel bags, backpacks, clothing, water bottles and hauled it off to a landfill, only to go to the same spot a few months later and clean it up again.”

But one environmentalist testified that permanent structures like roads and a border wall would be far worse for the environment than what’s there now. And Democratic lawmakers on the panel accused the GOP of using the Border Patrol as an excuse to weaken environmental protections, threatening the health and safety of border residents.

“The creeping militarization of our border has done little to slow border crossing, but it has affected our border communities,” said Rep. Raul Grijalva, D-Tucson, who said that expanding Border Patrol access on federal lands would be an abuse of power.

Grijalva said that a proposed border wall would block “local wildlife from their natural migration patterns … scarring the ecology of the entire region.”

Rep. Donald McEachin, D-Virginia, agreed with his fellow Democrats on the subcommittee that further border security would only harm the environment more.

“When we finally stop blaming others, we can see that we have put laws and systems in place that endanger the economy, environment, and health of our border communities far more than the discarded trash of a border crosser,” McEachin said.

But Andrew Arthur, resident fellow in law and policy at the Center for Immigration Studies, testified that “when you balance the cross-border traffic, and the garbage and the threat to national security,” heightened border security makes up for any environmental problems.

Bell said trash left behind by border crossers hurts livestock and wildlife: Animals eat plastic bags, discarded cans can get stuck in an animal’s foot and more. He said illegal border crossers have also lit fires and damaged property on his ranch.

If Border Patrol agents were allowed more access, they could stop illegal immigrants at the border and prevent these problems, Bell said.

But Scott Nicol, co-chair of the Sierra Club Borderlands Team, said that trash left by illegal border crossers is much easier to deal with than the problems that would be caused by rolling back environmental protections further.

“One of the things that was brought up was the idea that people that come across the border leave trash. And that is true, but the trash is a lot easier to remediate,” Nicol said.

“You can pick up trash. Walking trails will heal over a lot more quickly than a road that’s carved and graded,” he said. “Or a border wall that blocks water from flowing and blocks species from traveling across the border.”

But Bell said he hopes more Border Patrol access can be allowed on his ranch and others to fix the problem that is already there.