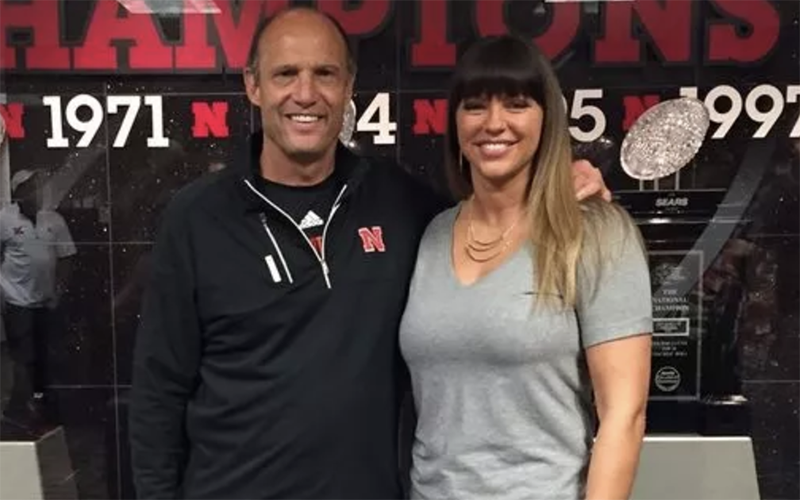 Brenda Tracy says she was sexually assaulted by three Oregon State football players in 1998. She is shown with Mike Riley, who was the coach at OSU at the time she said she was assaulted. Tracy now travels the country talking to college athletes about sex crimes. (Photo courtesy Brenda Tracy)

PHOENIX — Five days ago, former USA Gymnastics and Michigan State physician Larry Nassar was transported to a federal prison in Tucson where he will serve up to 60 years on child pornography charges and up to 175 for sexually assaulting minors.

The impact of his crimes is far-reaching and has prompted college athletic departments across the country to have deeper conversations about sexual assault on campuses. That includes Arizona State, which has an education program in place that begins the first several months an athlete arrives on campus, associated athletic director Jean Boyd said.

“We have taken the stance that it is our responsibility to educate our student-athletes in that regard,” he said.

In addition to mandated Title IX training by the NCAA, ASU has freshmen and transfer students undergo training that discusses sexual responsibility, relationships and proper decisionmaking.

Last year, the university brought in Brenda Tracy, a rape victim turned advocate, to speak to the football team and other athletes. She told them that in 1998, when she was 24, she was gang-raped by three Oregon State football players and another man.

“I woke up every day wanting to die,” Tracy said.

Although prosecutors felt they had a strong case, they dropped the charges when a traumatized Tracy failed to cooperate. The players’ punishment was a one-game suspension.

She later suffered from depression and post-traumatic stress disorder.

“I thought that maybe if I told my story maybe something would change, maybe I could wake up one day and not want to die,” Tracy said.

She now is an activist against sexual violence.

Tracy says she has spoken to 55 to 60 schools since April 2017 and averages about four a month.

ASU athletes she spoke to “were really engaged and it was nice to see them be that way and a lot of them came up to me afterward and then thanked me for being there,” Tracy said.

Bringing in guest speakers is one of the many ways ASU tries to teach its athletes how serious sexual violence is.

The Sun Devil Athletics Board meets once a month to discuss any issues involving athletes. The athletic department works closely with the Counseling and Consultation Office as well.

ASU has what it calls a “cares team” – made up of team physicians, representatives from counseling and consultation offices, and sport administrators – that meets once a week.

Additionally, new coaches are required to go through training on reporting procedures if an incident were to occur.

ASU uses such events as what occurred at Michigan State under Nassar as learning experiences and case studies for its coaches.

“As long as there are human beings and you have power dynamics and status and all these different things that kind of make these situations be toxic, we are always going to have to be proactive and reactive in how we address those issues,” Boyd said.

The Sun Devils played in the “Set the Expectation” game against Stanford last fall.

“Set the Expectation” is Tracy’s campaign, which originally started as a simple pledge.

While traveling the country, Tracy noticed how some coaches stood in front of their teams and expressed how sexual violence is not acceptable, but she also noted the ones who didn’t.

The purpose of the campaign is to get men involved.

Tracy hopes to bring more men into the conversation.

“I think that they feel maybe people don’t want them to be (involved) or they feel that people are always talking to them as the problem rather than just speaking to them in more positive aspirational terms which is what I try to do,” Tracy said.

“If women could end sexual violence we would have already done it. So, we have to get men involved on this issue.”

Now more than ever, schools are listening.

Michigan State’s basketball and football programs are under scrutiny for their lack of transparency when it comes to sexual violence. They aren’t the only ones who have been under a microscope.

Baylor University was accused in 2016 of taking extensive measures to cover up several counts of sexual violence involving the football team.

Lack of transparency is a common thread.

Tracy spent 16 years not wanting to live. Now she has found joy in her life that she never thought possible.

“I feel honored to do this work and I feel like it is my calling in my life,” she said.