Both sides of immigration issue face off outside Sen. Flake’s Phoenix office 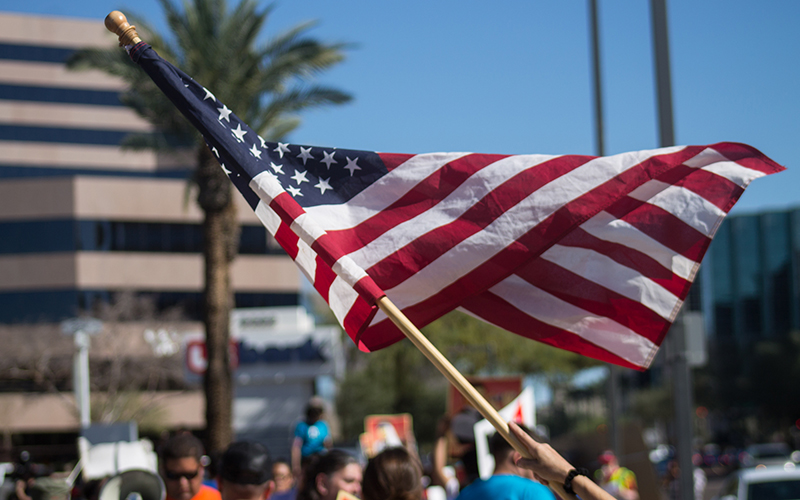 PHOENIX – Supporters of DACA and immigrants with Temporary Protected Status – known as TPS – clashed with an anti-immigrant group at a heated protest outside Sen. Jeff Flake’s office Thursday afternoon.

Divided down the middle of the same sidewalk, demonstrators on both sides featured tall signs and handcrafted banners. “Build the wall,” read one. “Stop separating families” read another.

Paola Carrasco, who attended the protest on behalf of the group Living United for Change in Arizona, said picketing outside Flake’s office in the Biltmore area is the only way to draw his attention and the attention of other senators to their cause. 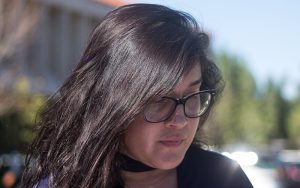 Paola Carrasco, representative of Living United for Change in Arizona, joined the crowd protesting. “The government hasn’t been there for us,” she said. “Basically they’re turning their backs against us.” (Photo by Miles Metke/Cronkite News)

The deal appropriates almost $400 billion mainly towards military and domestic programs, none of which include financial support for the passing of a DREAM Act. Currently, almost 800,000 immigrants fall under the DACA program, created in 2012 under Barack Obama, allowing people brought to the United States without proper documentation as children the temporary right to live, study and work in the U.S.

“The government hasn’t been there for us,” Carrasco said. “Basically they’re turning their backs against us.”

Betty Guardado, one of the vice presidents of Unite Here Local 11, a regional chapter of the international union, also expressed disappointed in the government.

Flake, R-Arizona, needs to do something to aid immigrants, Guardado said. “We want him to protect all of these hard-working immigrants.”

Guardado said many of the DREAMers and TPS recipients are entitled to rights because they’ve been in this country for most of their lifetimes.

“People that have lived here their whole lives, they have established roots here in the United States, and we don’t think that it’s right for them to be stripped down from (their) rights,” she said.

Jennifer Harrison, member of Patriot Movement AZ, thinks otherwise. She contends undocumented immigrants should not be a priority in the United States. 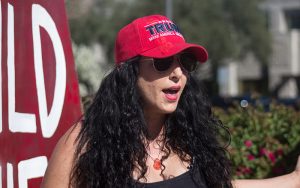 Jennifer Harrison, a member of the Patriotic Movement AZ, showed her support for the DACA and TPS decisions made by President Trump. “It’s a sad and unfortunate situation they’re in,” she said of “DREAMers.” “But where are their parents? Why is nobody holding these parents accountable?” (Photo by Miles Metke/Cronkite News)

“We owe them nothing. We owe Americans everything,” Harrison said. “American children’s dreams come before illegal aliens.”

Although Harrison said she sympathizes with DACA recipients, she believes the parents who brought them here are the ones at fault.

“It’s a sad and unfortunate situation they’re in,” Harrison said. “But where are their parents? Why is nobody holding these parents accountable?

“Instead, they’re putting the blame on my president, my government and American citizens. No. The blame lies on their parents. Their parents chose to come here illegally, break our laws.”

Marie Mayson, who was born in Cuba and came to the United States legally when she was 5, said immigrants are destructive.

“For many, many years illegals have been allowed to come through, destroy our country.” Mayson said. “They have destroyed city after city after city.”.

“Do they hold up (an) American flag?” she asked, pointing to the protesters on the other side. “No, because they have no respect for this country (or) our ways.”

“I’m in full support of our president. I love him and I support him 150 percent,” Mayson said. “That’s what (everyone) should do – stand behind our president and hope to God that (he) succeeds because if he succeeds, we’re all going to succeed.”

“It’s a game, they’re holding a string over us,” Carrasco said, referring to the DREAMers’ anticipation of a final decision on DACA. “They’ve been pushing off the budget because they know that they can’t come to terms with the fact that this is a humanitarian issue.”

“The government is struggling with that reality, and we know it.”

A protester shows support of Temporary Protected Status for Salvadorans during a rally and counter-rally outside Sen. Jeff Flake's central Phoenix office on Thursday. (Photo by Miles Metke/Cronkite News)

A protester waves a sign in support of the Deferred Action for Childhood Arrivals, a program slated to end in March. (Photo by Miles Metke/Cronkite News)

Paola Carrasco, representative of Living United for Change in Arizona, says the rally outside Sen. Flake's office was at attempt to hold him accountable. "We know that standing out and fighting, this is the only way to get his attention." (Photo by Miles Metke/Cronkite News)

Protesters show their support for the nearly 800,000 families that have been helped by DACA, which was implemented by President Barack Obama in 2012. (Photo by Miles Metke/Cronkite News)

Jennifer Harrison, a member of the Patriotic Movement AZ, expresses her support for President Donald Trump's immigration policies. "American children's dreams come before that of an illegal alien's," she said. (Photo by Miles Metke/Cronkite News)

A protester shouts into her megaphone on Thursday as people gathered Thursday outside Sen. Jeff Flake's Phoenix office. (Photo by Miles Metke/Cronkite News)