Arizona farmers, pressured by grinding drought and urban sprawl, look for ways to save water

CASA GRANDE – As water supplies in Arizona dwindle due to drought, groundwater pumping and a warming climate, farmers increasingly are facing poorer crop yields and, in some cases, resigning once-fertile farmland to unusable barren ground.

“About two-thirds of this farm isn’t being used because of our water limitations,” Travis Hartman said of his family’s 247-acre cotton and alfalfa farm.

Hartman, whose belt buckle is emblazoned with the word “COTTON,” is the fourth-generation owner and operator of Caywood Farms, a business that used to be a lot bigger.

Driving along the edge of his farm in his white Ford pickup, Hartman said he and his childhood friends used to kneeboard in the irrigation canals that water the fields. Today, Caywood Farms relies on water from the San Carlos Irrigation Project more than ever.

Arizona is in its 21st year of long-term drought, according to the Arizona State Climate Office. Flood irrigation, once the preferred method of watering crops, steadily is becoming obsolete. Seventy percent of farmers, including Hartman, use flood irrigation, agriculture experts say. But now, Arizona’s farmers are scrambling to find ways to use less water.

“The water we had when I was a kid out there watching my grandad and my family farm was a lot different than it is now,” he said. “We’re obviously in a huge drought.” 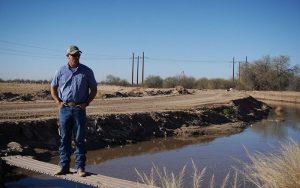 This canal in Pinal County provides much of the water for farmer Travis Hartman’s cotton and alfalfa crops. (Photo by Angel Mendoza/Cronkite News)

In flood irrigation – the oldest known method of watering crops – water is delivered through a pipe or ditch and flows over cropland. However, large amounts of water are lost to evaporation and runoff, according to the Alliance for Water Efficiency.

Some farmers have transitioned to drip irrigation, which provides a slow-moving supply of water directly to soil. Introducing water gradually and directly to crops also reduces chances of evaporation or runoff, increasing water efficiency.

“Research shows that for farmers that are able to implement drip irrigation,” said Andrew Berardy, a food-systems postdoctoral research associate at Arizona State University, “they drastically reduce their water consumption and sometimes they even increase their crop productivity. So they could see increased yields and decreased costs.”

But converting to drip irrigation is a huge investment for most farmers, Berardy said.

Hartman said transitioning to a drip irrigation system costs $40,000 to $100,000 just for the filtration system, not including maintenance fees for protection against animals that could potentially damage the system.

“Drip irrigation is extremely expensive,” Hartman said. “The biggest cost is your pump system and your filtration system.”

Jeffrey Silvertooth, the associate dean of the College of Agriculture and Life Sciences at the University of Arizona, said switching from flood to drip irrigation, in total, would cost $1,500 to $2,000 an acre.

“It’s a significant investment per acre of new capital investment for systems that have a very thin margin of profit in the first place,” Silvertooth said.

Right now, Hartman said, he and other farmers are more concerned with impending water shortages, rather than the cost of advanced irrigation systems. 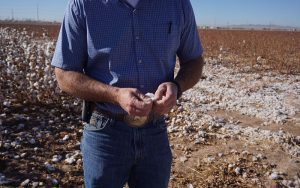 Travis Hartman pulls apart a cotton boll to expose its seed. He is the fourth-generation owner and operator of Caywood Farms. (Photo by Angel Mendoza/Cronkite News)

“If I had the money or the water to plant every acre we had, we’d be making more money, by all means,” Hartman said. “The problem with getting extra water is, it’s expensive.”

Maricopa, Pinal and Pima counties receive water primarily from the Colorado River through the Central Arizona Project. But Hartman’s system, along with those of many farmers in Pinal County, relies on water provided by the San Carlos Irrigation Project.

Although Hartman’s farm is in Pinal County, using Central Arizona Project water would be impractical, he said.

But the huge CAP system faces a geographical challenge.

“All of our deserts are uphill from the river,” Hartman said. “That water is lifted 800 feet when it comes out, over Buckskin Mountain, and then it’s lifted 1,500 feet across the desert to get to its final user.”

Drilling wells to pump more groundwater is off the table as well, he said. As of 2006, farmers near municipal water providers, including the San Carlos Irrigation Project, are prohibited from drilling their own agricultural wells, according to the Arizona Department of Water Resources.

That leaves many of the state’s farmers reliant on state-controlled water. 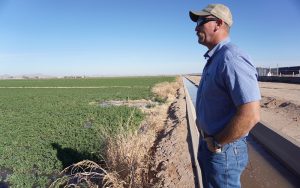 “Every farm in general in Arizona is experiencing effects of the drought, from the Salt River Project to the Central Arizona Project to the San Carlos project,” Travis Hartman says. (Photo by Angel Mendoza/Cronkite News)

“We keep moving people in here and taking more groundwater,” Hartman said. “That leaves less water for the farmers, and at some point, there’s not going to be enough.”

Shortage of agricultural water could have statewide and global impacts on food supplies, agriculture experts say.

Most of Hartman’s alfalfa, which is harvested into hay to feed cattle, sells locally. His cotton sells internationally.

“A lot of it goes to China. China is the biggest buyer of cotton,” he said. “Alfalfa is more local … some of it goes to Texas, (and) I’ve shipped hay to Dubai.”

ASU’s Berardy said Arizona has historically produced and exported a variety of crops because of its arid weather. Multiple states could be affected if the water runs out, he said.

“There’s potential for a cascading impact where reducing Arizona’s agricultural productivity and capability will reduce other states and in turn reduce their ability to export back to us,” Berardy said.

UA’s Silvertooth said Arizona in particular has historically been a provider of crops for other regions like it globally.

A previous version of this story incorrectly spelled the last name of Andrew Berardy. The story has been updated to reflect the correct information. Clients who used earlier versions are asked to run the correction that can be found here.

“We have some of the highest quality crops that we produce in the desert Southwest compared to other places,” Silvertooth said. “What we do in Arizona translates quite readily to arid and semiarid regions around the world.”

Hartman said everybody, especially those in cities, should be concerned about water.

“All of us are going to be in trouble – not just the farmers, even the people moving in here, we’re running into a huge shortage of water,” he said. “Unless you’re here and see it, or if you have some sort of background in it, nobody thinks about where their food comes from, where their clothes come from.”

“Give the farmer a little bit of respect.”