Is 2018 the year Arizona bans texting while driving?

PHOENIX – Phoenix firefighter Jonathon Hall believes a ban on texting while driving could have saved his father.

Thomas Hall died in a Prescott Valley crash in 2016, after a woman looking at her cellphone rear-ended his motorcycle, Hall said at a Senate hearing this week. 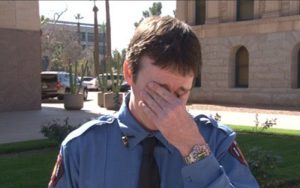 Phoenix firefighter Jonathon Hall believes a ban on texting while driving could have saved his father. (Photo by Emily Richardson/Cronkite News)

“My dad was my hero and losing him is terrible,” said Hall, showing his support for Senate Bill 1261, which proposes to ban driving while texting.

Sen. Steve Farley, a Tucson Democrat, is sponsoring the bill, but such measures have failed to gain traction in the Legislature over the past decade.

Arizona, Missouri and Montana are the only states that have not banned texting and driving, according to the Governors Highway Safety Association.

“Over the years, I’ve had an awful lot of victims’ families coming into my office and telling me their stories about how their life was forever changed by a texting driver who carelessly ran into, killed, or injured seriously a family member or themselves,” Farley said. “We have to stop that from happening.”

SB 1261 will allow law enforcement to hold those who endanger others accountable, Hall said.

The measure also would raise public awareness of the dangers of drivers using a phone while behind the wheel. Every day, nine people are killed by a distracted driver, according to the Governors Highway Safety Association.

“The education piece is paramount in tandem with the legislation,” Hall said.

If the bill becomes law, it would make it a petty offense for drivers “to read, write, or send electronic messages” while behind the wheel. Drivers could still use hands-free devices and navigation systems.

Farley hopes this is the year the distracted driver measure succeeds.

“This year provides a great opportunity,” Farley said. ” I think there’s a whole different spirit here in the legislature where we can put any of those old history things aside and just legislate common sense.”