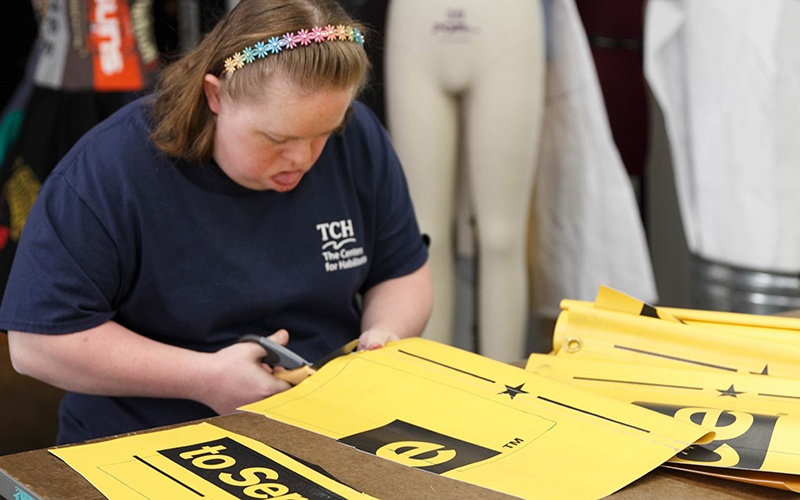 Madison Ryan cuts out panels used for a new backpack design at FABRIC Tempe on the Arizona State University campus. She works with discarded vinyl banners in collaboration with the university’s Zero Waste department. (Photo by Meagan Boudreau/Cronkite News) 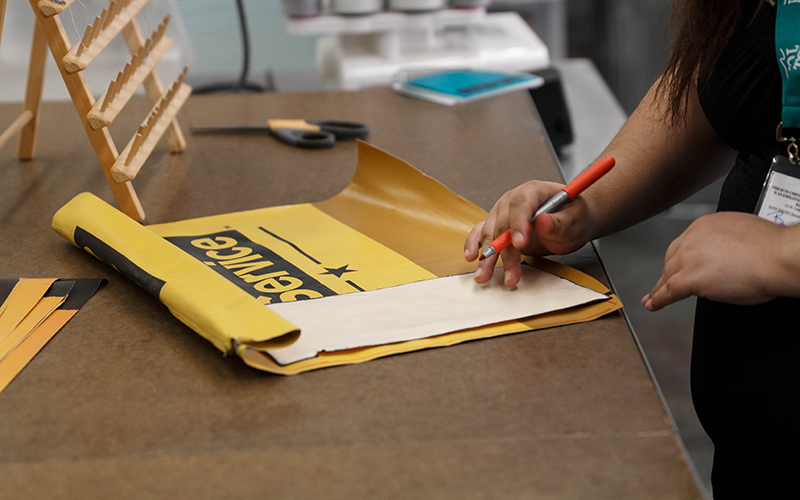 Manufacturers produce more than 10 billion pounds of vinyl each year, according to the Vinyl Institute, a U.S. trade organization. (Photo by Meagan Boudreau/Cronkite News)

Madison Ryan, who learned how to sew only a month ago, sews the side panels for a new backpack design at the FABRIC Tempe space on the Arizona State University campus. (Photo by Meagan Boudreau/Cronkite News)

TEMPE – The vinyl banners come in all shapes, sizes and patterns – maroon and gold stripes, camouflage, outlines of soldiers.

When a new batch arrives in a workroom tucked into the Arizona State University campus in Tempe, workers from the Center for Habilitation get excited.

They will turn these used banners into tote bags and sell them to the public.

The workers are part of a new project launched by ASU’s Zero Waste department, which works to reduce waste on the university’s campuses. Staff members had been collecting used banners, which are made of non-degradable plastic waste, and wanted to figure out a way to reuse them, said Katherine Schumacher, a senior program coordinator with ASU’s Zero Waste.

They connected with FABRIC Tempe, a co-op workspace for those breaking into the fashion industry, and discovered workers from the Centers for Habilitation there. Women at the center, which helps physically and developmentally disabled adults with job placement, learned to sew at FABRIC.

Schumacher said Zero Waste asked the women if they could make totes out of the banners.

“They love” making the totes, said Ryan McAlister, the job coach of their five-person “enclave” at the center. “They brag about how they get to go to sewing. It’s the cool enclave. They just absolutely love it.” 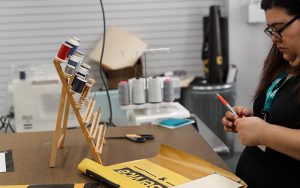 Nabora Blea considers how to get the most material from a portion of vinyl banner she’s turning into a tote bag. Arizona State University’s Zero Waste department partnered with the Centers for Habilitation to turn the non-degradable banners into usable products. (Photo by Meagan Boudreau/Cronkite News)

The women earn a portion of proceeds from the $18 “Banner Bags,” which they stocked at the Tempe campus bookstore last month. The bags sold out the first day. Now, the enclave is creating 48 additional bags with more styles.

The effort not only helps the women, Schumacher said, it keeps the plastic out of landfills.

There are about 3,000 vinyl-manufacturing facilities in the U.S., and 1.8 billion pounds of vinyl end up in landfills each year, according to the Vinyl Institute.

Although vinyl is extremely versatile, there are few ways to recycle it. In fact, the Vinyl Institute has identified only one company – Arizona Pacific Pulp and Paper Inc. – in the state that recycles vinyl products.

“If we can put them into reuse, it’s better because it elongates the lifespan of the banner,” Schumacher said. The Zero Waste project “also provides another opportunity where maybe a plastic bag isn’t needed.”

Susan Wade, a spokeswoman at the Vinyl Institute, said the tote bag recycling initiative reduces the environmental footprint not only of vinyl, but on many other fronts as well, such as reducing carbon emissions from shipping the products.

For the workers at the center, the bags also give them the opportunity to make their own designs – and put their personal stamp on each bag.

They are expanding from totes and messengers bags to backpacks, each one with a label indicating who made the bag.