PHOENIX — As one Maricopa County community college football coach was out delivering letters of intent to recruits, he received a phone call from his athletic director. It was a call months in the making.

The announcement comes after an eight-month process by an official task force, which recommended in October that the programs be terminated.

“The district administration looked at the task force recommendations, considered them from May of last year all the way through December and early 2018,” said Matt Hasson, the district’s communication director. “And we supported the decision of the task force that football was a program we should look at eliminating.”

The district has said that football programs account for nearly 20 percent of the district’s athletic budget and cited high insurance costs.

For those with ties to Maricopa Community Colleges, the issue is about a lot more than money.

While many athletes use community colleges to cap their football careers, many who played at the impacted programs used them as a springboard to something more. 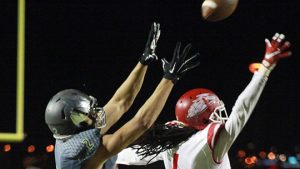 Former St. Louis Rams quarterback Joe Germaine began his college football career at Scottsdale Community College, where he holds the record for most passing yards in a game (580). He was only there for a season before transferring to Ohio State, but credits that season with the opportunities he earned following it.

“It’s a sad day,” Germaine said. “I think there’s a lot of young men that will be negatively affected by that.”

Former Arizona State head coach Todd Graham heavily recruited junior colleges throughout the country during his time with the Sun Devils, including standouts like Damarious Randall, Marion Grice and Jaelen Strong, who went on to play in the NFL

“It’s helping young people to better themselves and give an opportunity,” Graham said. “Obviously there’s a cost in running a football program at the community college level, but it’s a sad day because a lot of kids are going to miss out on a lot of opportunities they’ve had in the past.”

With fewer football programs in the state, more players may slip through the cracks, never getting to live out their dreams of playing college football.

For Phil Aholt, former quarterback at Scottsdale Community College and offensive coordinator for Mesquite High School, the decision hits close to him.

Coming out of Cactus Shadows High School, Aholt was an Artichokes player for two seasons and now is entrusted with helping the players he coaches find their way, some of whom end up going the community college route.

“At 18, not everybody is fully grown into their body,” Aholt said. “Community college really provides the opportunity for those late bloomers or kids that didn’t get the looks they wanted to to give themselves another opportunity to get into college.”

Northern Arizona wide receiver Jaeren Burch was one of four athletes who played for one of the four Maricopa Community College teams that were on the Lumberjacks roster this season. Spending two years at Phoenix College afforded him the opportunity to get into a four-year program.

“I didn’t have any looks,” Burch said. “I was young. I was only 17 when I graduated. My only option was to go junior college. I had the grades to qualify, but I didn’t have the money to go to a university.”

For him, the loss isn’t just for the athletes, but those around the program as well, citing a friend who works with Scottsdale Community College as a trainer.

“It affects the community,” Burch said. “Not only the athletes, but everyone who works with them and gets experience that way.”

As of 2016, there were 17,761 high school football players in Arizona, one of the nine states plus Washington D.C. to see an increase from 2010-11. But with four teams going away, there’s less room for those athletes to go.

Arizona community college football has a history of success, especially during an era when there was less competition in the Valley for the entertainment dollar. Mesa Community College, for example, won state titles in 1973 and 1975.

Fewer community colleges around the country sport football programs than in the past. Of 535 schools, only 65 have football. Some say it reflects a larger trend. Participation in football for children ages 6 to 12 is down eight percent in the last decade, according a 2017 study by Sports and Fitness Industry Association.

The cuts were troubling to many.

“Arizona is a breeding ground for some of the best talent,” Aholt said. “I think it’s kind of a waste getting rid of this because everything is starting to come together.

The sport is at an all-time high out here. It does sting.”