The collaborative Leadership Through Problem-Based Learning Initiative is open to girls in Grades 9-12 at Xavier College Preparatory. (Photo by Leah Goldberg/Cronkite News) 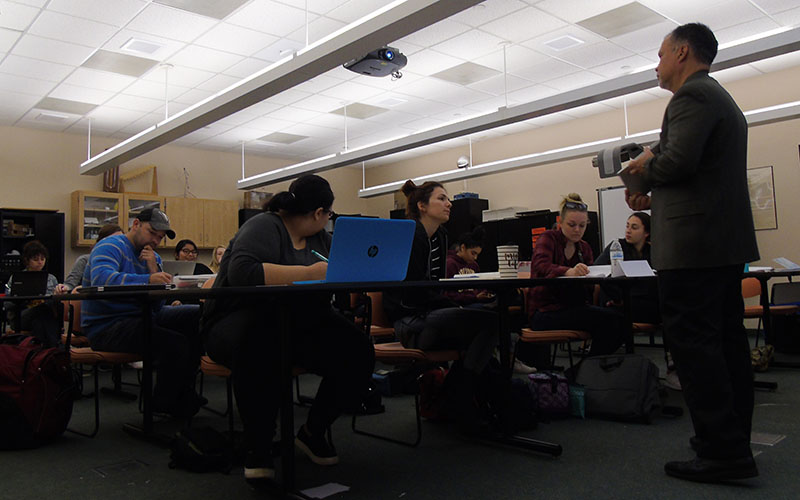 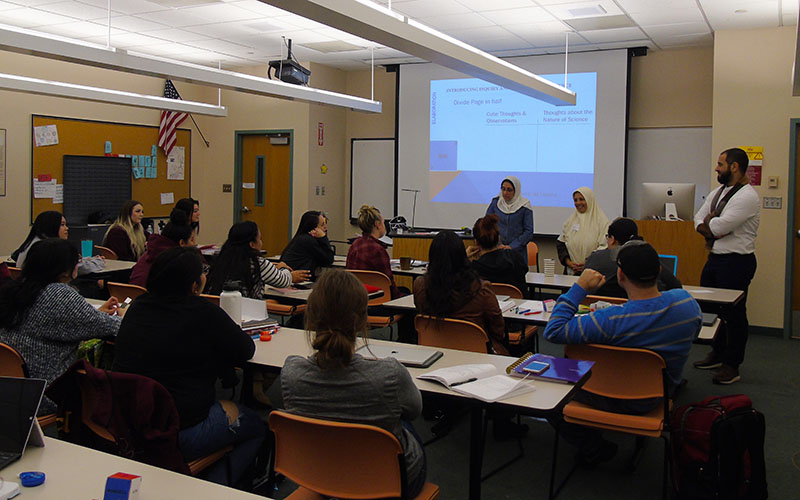 PHOENIX – Communicating with people from different cultures is always difficult, but an Arizona State University professor hopes the universal language of science will bridge the void.

The students, grades 9 through 12, communicate virtually through WhatsApp, Dropbox and such social media websites as Facebook. For both physics and biology classes, each student partners with one or two girls from the other country to solve realistic science problems.

Despite their cultural differences and the eight-hour time difference between Egypt and Arizona, students and teachers said they continue to build friendships and communicate outside of class. Ahmed Hussein, the director of the Al Farouk school, recalled how one of his students in Egypt and a student from the United States communicated through Facebook for about three hours just getting to know each other. 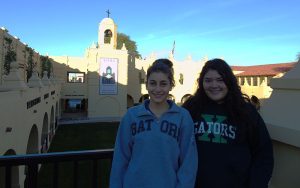 Marilyn Ghazoul and Gabrila Soto, Xavier College Preparatory sophomores, have been part of the initiative since December. (Photo by Leah Goldberg/Cronkite News)

Marilyn Ghazoul, a sophomore at Xavier College Preparatory and a STEM biology student, said the things she first noticed about her Egyptian partners were the structure of their homes and their social-media presence.

“They are more conservative with their Instagram pictures,” she said.

Gabriela Soto, another sophomore at Xavier Prep, noticed that her Egyptian partner did not have Instagram or Snapchat. However, Soto’s Egyptian counterpart still managed to send her pictures through other messaging sites.

Even though these young women are in regular communication, their differences, at times, have created roadblocks. Living on opposite sides of the world has caused confusion, despite their similarities as high-schoolers studying science.

There was an incident between Soto and one of her Egyptian partners where politics interfered with their relationships. Some of the Egyptian students thought Soto and her Xavier Prep partner were judging them based on their Islamic religion and culture.

“They thought that was going to be a problem,” Soto said. “But we wanted them to know that we accept them either way. That was one of the big challenges we had to overcome in our friendship with them.”

The program is funded by the Stevens Initiative, which was founded in honor of J. Christopher Stevens, a U.S. career diplomat and ambassador to Libya who was killed when the U.S. consulate in Benghazi was ambushed by rebel fighters in 2012.

Stevens’ death was unfortunate, Rillero said, “but it (is) great that the grant was named after him because it is trying to promote better relationships between people in the U.S. and people in the Middle East.”

Programs like this, where students learn to appreciate and understand others on a personal level, are critical, he said.

“I think certainly if our global leaders and American leaders had a sense of being able to work with people who are different, we would all be much better off,” he said.

Two teachers and the director of Al Farouk visited Phoenix last week to speak with Rillero’s ASU class and work with Xavier students in the STEM initiative. In June, three Xavier faculty members will travel to Cairo to collaborate with their Al Farouk colleagues and observe the Egyptian students in their classes.

Rillero said this initiative is more accessible to students and their teachers because virtual exchange is less expensive than traveling back and forth.

“I like the idea of the evolving activities between the students through science, especially physics,” said Intessar Tmam, physics teacher at the Al Farouk school. “I consider it a language of the universe. Everybody speaks it in the same way.”

Although they already are familiar with the lessons in the STEM initiative, the Xavier students said they are learning other valuable lessons.

Soto said she no longer procrastinates in her school work since joining the initiative.

“I have seen changes in my own work ethic just because they work at a quicker pace than we do,” she said of her Egyptian partners.

Although the program is only three months old, the students and teachers have high hopes for a successful outcome.

“I hope that the idea of this program or these activities expands so the people can live together,” Tmam said. “They talk together with different cultures, different places, to reach the solution for the problems just only by thinking and listening to each other. That’s what I hope.”