PHOENIX – Charlie Wilde finds himself in a unique situation. In an era of young athletes specializing in one sport, the Pinnacle High School basketball coach has a team stocked with three highly recruited athletes who each play a different one.

Senior forward Calvin Schapira is a fireball-throwing left-handed pitcher from the baseball team that is committed to the University of Southern California. Junior guard Spencer Rattler is the No. 1 dual-threat quarterback in the nation for the Class of 2019 and is committed to the University of Oklahoma. Lastly, point guard Nico Mannion is ranked No. 22 on the ESPN 25 for the class of 2020.

With all of that talent on one roster it has to be difficult to manage.

“It’s surprising because you think it would kinda be like a little bit of a mini nightmare, but it’s not. These kids are such great kids,” Wilde said. “They might be better kids than they are athletes, which is hard to do… They’re such special kids along with their special talents that they make it really easy for me.”

Currently on a seven-game win streak, the high-powered Pioneers are ranked No. 5 in the state. They have an overall record of 15-6 and are undefeated in the 6A Desert Valley Region. Powering that winning streak is the confidence shown by the star players and desire to be the last team standing in February.

Rattler, having thrown for over 9,000 yards and 93 touchdowns in his high school career, is playing his last basketball season before turning his attention strictly to football next year and preparing for Oklahoma. Instead of fearing injury through basketball, Rattler believes he has the upperhand in playing basketball in the football offseason.

“Basketball just helps me with everything on the football field. I mean footwork, agility, speed and conditioning for sure. I just feel like I have that advantage on the football guys when I get back from basketball,” he said.

The team’s unique situation of having heavily recruited players from different sports has caused a bond between Mannion, Rattler and Schapira that many other high school athletes do not have.

“It’s fun. The whole team kind of gives each other crap all the time and everyone stays pretty humble about it,” Schapira said, “We don’t really let it go to our heads too much so we just kind of keep it as normal as we can. We’re all best friends and buds so that kind of stuff doesn’t really affect us too much.” 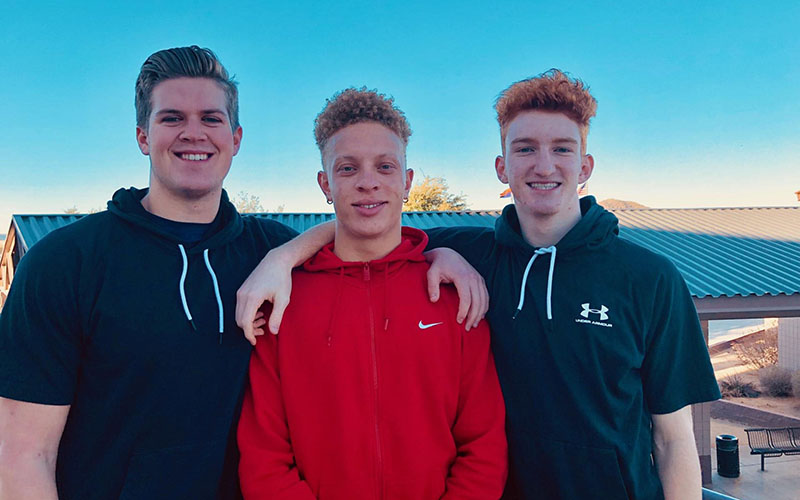 The trio of (from left) Calvin Schapira, Spencer Rattler and Nico Mannion are ready to compete for a state championship (Photo by Shawn Moran | Cronkite News)

After starting off the season 0-3, the Pioneers have been playing polished team basketball. Since that time, Pinnacle has only lost to out-of-state teams from Bellevue, Washington, and Las Vegas, as well as undefeated national powerhouse Shadow Mountain.

Even though the team is confident and loaded with talent, the Pioneers are determined to not grow content in any phase of the game.

“I’m in the gym probably every day just working on everything because there’s nothing that I’m perfect at,” Mannion said, “So if I just stay in the gym and keep working I think I can get to where I want.”

Where Mannion wants to get to is still to be seen. He is the only one of the trio that is not currently committed to a university. Still a sophomore, the Sports Illustrated-featured point guard still has plenty of time to make his decision. Already with 10 Division I scholarship offers, Mannion will look to lead Pinnacle to its first boys’ basketball state championship ever.

Head coach since he started the program 18 years ago, Wilde believes this team could top the charts of Pinnacle basketball.
“Potentially it could be my best team. Talent-wise, skill-wise, dedication. Because of the talent we have here and some of the players that we have, I think it could be potentially my best team ever,” he said.

With college scouts regularly attending games and calling coach Wilde’s office, the spotlight has been placed on Pinnacle High School in North Phoenix. Even with all of the attention, the Pioneers star trio have not been distracted from their individual or team goals.

“It can get to your head if you let it but you just gotta stay humble and keep working,” Rattler said, “It definitely helps with your confidence when you’re playing, regardless of any sport.”