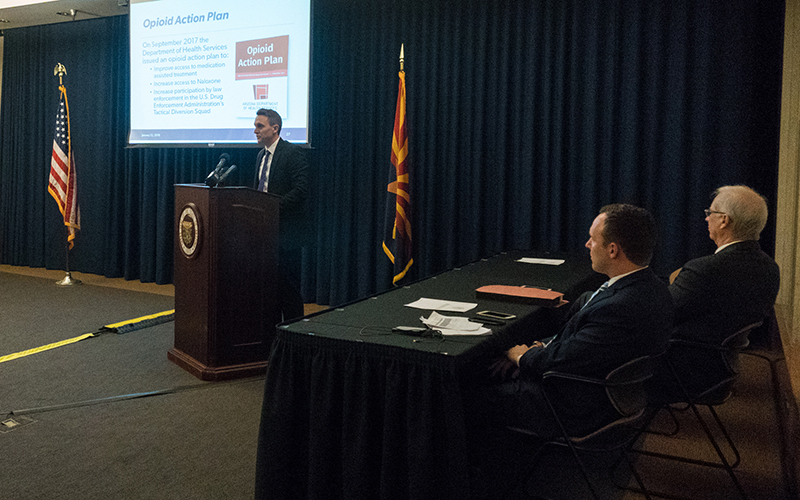 “My budget will include a full commitment to accelerate the state’s K-12 investment and restore long-standing cuts from the recession,” Ducey said at his state-of-the state address on Jan. 8.

In fiscal 2016, the state’s school districts spent about $3,300 less per pupil than the 2014 national average, the most recent national data available, according to a report by the Arizona auditor general.

Matthew Gress, director of the Governor’s Office of Strategic Planning and Budgeting, unveiled the budget, which includes $300 million more in spending over the current budget. He specified that the proposed budget would allocate $100 million for K-12 education.

“K-12 education is the most important part of Doug Ducey’s responsibility as governor and is his Number 1 priority,” Gress said.

Stephanie Parra, a spokeswoman for the Arizona Education Association, said the governor’s proposal is a step in the right direction, but the state needs to do more.

“We appreciate the additional assistance that the $100 million for K-12 education will offer,” Parra said. “While he is making a difference, we are still in $1 billion in deficits since the (Great) Recession.”

Gress said the governor’s proposed budget also prioritizes addressing other state issues, such as wrong-way drivers, opioid addiction, prison recidivism and the lack of funding for the state’s three public universities. The proposal includes $15.8 million in funding for adoptions and more money to hire state troopers to patrol border areas in southern Arizona.

“Doug Ducey is taking us back to before the recession hit,” Garcia said. “We have seen these proposals from his office, and they don’t come through.”

The budget proposal indicated that “a combination of prudent belt-tightening initiatives and steadily growing revenues” will allow for the state to increase it spending and balance the budget.

The governor’s budget is not binding. The Legislature will approve a budget for the new fiscal year, which starts July 1, and send it to the governor.