Refugee sisters Samah Mohamed, 17, and Huda Mohamed, 14, made their home in Mesa after fleeing Kenya six years ago. (Photo by Allie Bice/Cronkite News).

MESA – Samah and Huda Mohamed shared a single, blue-walled bedroom with their two sisters and parents in Nairobi, Kenya, before hostile tribes forced them to flee their country and resettle in America six years ago.

Samah remembers hearing gunshots as she walked the mile to school. Huda was worried about being followed by militia members. The sisters, who are Muslim, grew up hearing gunfire but didn’t fully understand the longstanding fighting between the Kikuyu and the Jalous tribes.

“We didn’t go to school for one whole week, because we were afraid that (the tribes) might actually attack us,” Samah said. “They can’t stand each other, (the tribes are) always fighting.” 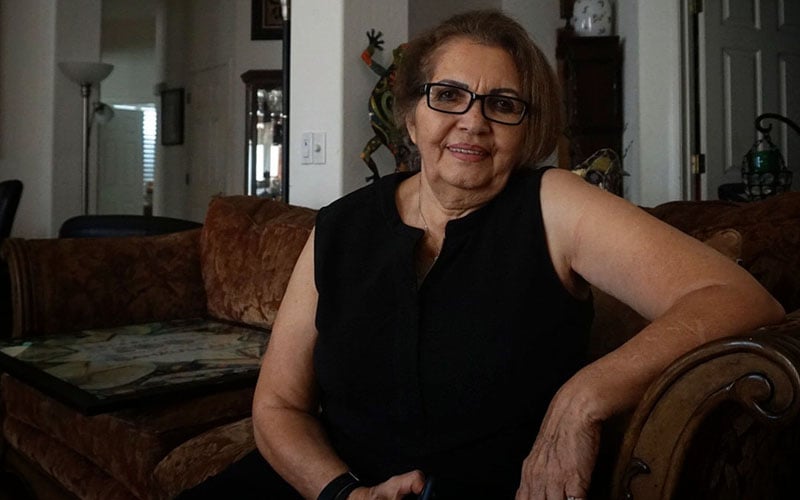 The Kikuyu and the Jalous traditionally support different Kenyan presidential candidates and react with violence if their preferred candidate loses, said Edwin Okong’o, a journalist from Kenya. Since the country gained independence in 1963, rigged presidential and parliamentary elections have been part of the “culture we were brought into,” he said.

Samah was 11 and Huda was 8 when they fled Nairobi with their family. Now 17 and 14, Samah and Huda have found their voices in Arizona. Both are involved in clubs at school and in their community.

“The life that is full of strife,” a poem from Samah reads. “Look at me, look at my eyes, Witness everything that I have survived. I am a Muslim with so many dreams with your help I will feel at ease.”

“I speak on the behalf of those who have been ripped from their homes,” Samah’s poem continues. “Can’t you see that it is poverty and war that Muslims are so desperately trying to escape from? They are not here for the luxuries you have in your life. They only want to survive.”

The number of Kenyan refugees in Arizona increased from six to 41 from 2008 to 2010, Arizona Department of Economic Security numbers show. The department oversees the Arizona Refugee Resettlement Program.

This increase, according to Okong’o, was because of the country’s 2007 presidential election — one of the most contested.

Kenya’s first president held power for 14 years, and as a Kikuyu, began the dynasty that continues to rule Kenya. To those outside the Kikuyu tribe, Okong’o said, the country’s first president was seen as a European puppet, moving in ways that were beneficial to the European elite and not Kenyans. Contempt between the ethnic tribes grew with each election.

Okong’o said the December 2007 presidential election between a Kikuyu leader and a Jalou leader was rigged, leading to the Kikuyu incumbent winning by millions of votes. 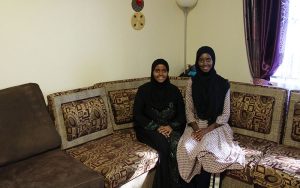 Growing up, sisters Samah Mohamed and Huda Mohamed were scared to go to school because of militant tribes in Nairobi. (Photo by Allie Bice/Cronkite News).

“By the end of 2007 and the beginning of 2008, violence broke out,” Okong’o said. “People were burning their neighbors and people were fleeing.”

And there has been a recent uprising in Kenya, which led to a re-election Oct. 26.

“You have both sides where no one has a cooler head. It’s like two (President) Trumps.… Even today we haven’t understood the ruling government and the public,” Okong’o said.

The 2007 elections caused tribal fighting and forced many in Nairobi — entire families like Samah and Huda’s — to flee.

In the family’s Nairobi apartment, Huda recalled a place reserved for Papa to sleep. Her father would also rent room space for money.

“Thinking back, I should’ve been scared,” Huda said. “You never know what they might’ve done.”

There was one bed and typically, four people would sleep on it, but it always depended on how many guests were renting the space.

“We’d see that our parents were stressed, but we didn’t know what they were going through,” Huda said. “They would try to keep us out of it.”

“Water would run out all the time. Water would stop for several days, weeks and months at a time,” Huda said. “Just to be prepared, we would take buckets full of water from the shower” on days when it worked.

“We didn’t have lights either,” Samah said. “The only times the lights were available was during the night, and in the morning, he (her father) would turn the lights off.”

The sisters said their father did odd jobs to get by, but the family sometimes couldn’t pay rent because “jobs were so hard to find.”

“We almost lost that apartment because my parents couldn’t pay for it anymore,” Huda said.

When they found out they were resettling to America, Samah remembers lying on the bed with her sisters and thinking: “What’s the first thing we’ll do in America?”

“Everyone there thinks of America as paradise,” Huda said.

The journey to Arizona in 2011 required the family to travel to a refugee transit camp, a Kenyan hotel. Then to London, New York and, finally, Phoenix.

Their family initially lived in Phoenix with the help of a resettlement agency, then moved to Chandler. With the help of refugee friends, they found an even more affordable home in Mesa.

The sisters found a refugee community in Mesa and started to get involved in such organizations as the American Muslim Women’s Association.

Arhem Barkatullah, president of the association’s tutoring program – Refugee Integration, Stability, and Education – called the sisters “the golden children” of the group.

“Samah and Huda serve as examples for what we want for all of our students in R.I.S.E., to succeed academically and get involved in their communities and at school,” Barkatullah said.

The sisters found a passion in poetry, which allowed them to write about their experiences and feelings as Muslim, Kenyan refugee women.

Samah said tutors within the R.I.S.E. program helped her write her poem, but she shared it reluctantly. Her poetry, she says, is meant to “prevent hatred and spread peace.”

“I speak on behalf of my unwanted Muslim brothers and sisters. Who have experienced discrimination. Who have seen destroyed nations. And the families of those nations killed,” Samah’s poem read.

But she said she’s “not very good” with poetry and prefers chemistry and biology.