GLENDALE – Officials at the Central Campus of Western Maricopa Education Center have slowly grown one of their programs to train students for one of Arizona’s most in-demand careers: aviation.

High school students at West-MEC can get their federal aviation licenses and certificates after completing a career technical education program while still in school.

The state’s aviation industry contributes more than $38 billion to the economy, according to the Arizona Commerce Authority. It also employs more than 470,000 people. 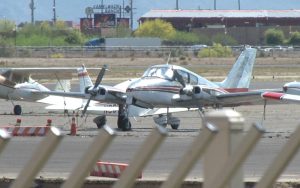 Tama Mohelnitzky, an aviation maintenance instructor at West-MEC, described the program as intense, but fun.

“They’re going to learn a lot,” she said.

Mohelnitzky has worked in the aviation field for more than 30 years, and she shares her experience with her students.

“What it gives the students is the opportunity to make something that is as close as to being airworthy as can possibly be,” Mohelnitzky said. “Plus, (they) learn all about a helicopter and how it’s put together, including the engine, the cyclic and all of the control services.”

Melissa Coggin started the program her junior year of high school and is now taking the avionics program as an adult.

“Whether you’re going to end up using it professionally or not, you have a much better understanding of how things work – both, you know, on the aircraft and just generally on that manufacturing level,” she said.