The specialty program helps students think in both languages, which helps them in all academics and out perform their peers, principal Chad Segersten said.

“Starting in kindergarten they learn 50 percent of their day – in math and science – in Mandarin language and the other half in English,” said Segersten, who has overseen Gavilan Peak for five years. “When you learn a second language your brain becomes malleable and changes.”

It will be the first class of Mandarin students to go through the entire program at the K-8 school when the school year ends in May.

Chinese is considered a difficult language to learn, requiring about 2,200 hours for native English speakers to learn, according to a U.S. State Department study for Georgetown University. Some schools teach subjects like math in Mandarin because the language’s logical patterns make it easier for the students to learn the subject, Segersten said.

The majority of the schools have started to teach English for half of the day and Mandarin the other half, after Gavilan Peak students had positive results.

She has been on the principal’s list almost every year.

“It’s given me more opportunities to speak and to be more confident with speaking because I can do it in a whole other language, too,” Maxwelltodd said.

Ryan Tsau, who also had been in the program since kindergarten, said his biggest challenges were in the first- and second-grades when he had trouble writing and remembering Chinese characters.

But the struggle has paid off. He said that on state standardized tests, sixth graders who were in the Mandarin program do better than other students at the school. 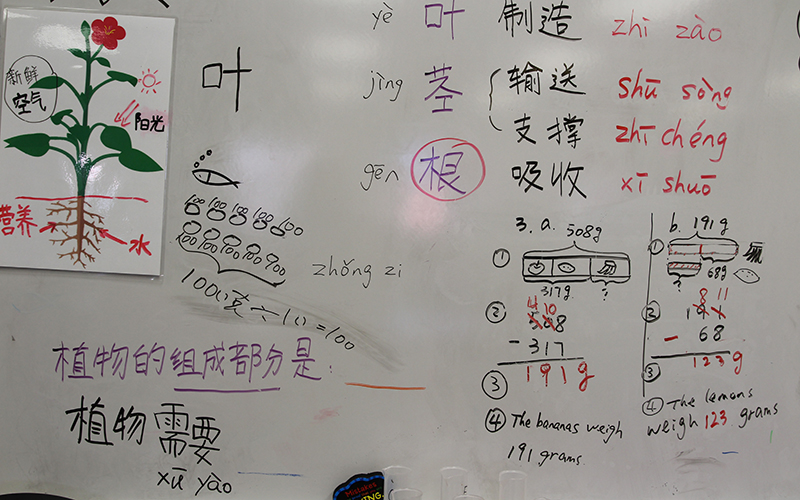 The Mandarin program, funded by a grant, started at Gavilan Peak more than eight years ago. At first it was just an elective or specials option for the students and later morphed to an immersion program.

“I think the district saw the value and the benefit for children,” Segersten said.

After Gavilan’s success with the program, the district added it to Desert Sage School.

The program’s main goals, as stated on the Deer Valley Unified School District’s website, are to help students succeed in the global economy, appreciate Asian culture, give a “critical language” opportunity and expand their academic learning.

Segersten said that outside the U.S., schools in other countries routinely teach students a second language.

“We’re not doing something new we’re just catching up with the rest of the world,” Segersten said, smiling.

Deer Valley educators notice more schools in Arizona are adding second-language programs, ranging from immersion programs like the district’s to a few language classes. Some schools are focusing on Chinese, he said.

The district this school year has 491 students enrolled in the Mandarin program, with 297 of those students attending Gavilan Peak.

Segersten said enrollment in the kindergarten Mandarin class this school year has increased by 50 percent.

Qin Li, a third grade Mandarin teacher from China, started teaching at Gavilan Peak four years ago so she could experience American culture and improve teaching students in China.

“I am trying to become the bridge for the China school and American school here so we can have sister schools,” Li said.

“We are going to have a Skype night so we can practice English and Chinese for both students so it benefits both sides of students,” she said.

Li remembered that when the school year started, students in her class were mostly quiet because she had a rule that they could only speak Mandarin in her class. As they learned more, they got more comfortable – now she has to constantly ask them to quiet down.