PHOENIX – Arizona already faces a shortage of skilled cyber security workers. And one local cyber security expert said those who do hold these jobs might need to brush up on their skills.

“We have a huge cybersecurity skills gap,” said Brett Scott, who has worked in the IT industry for 30 years. “And most people that are in the cybersecurity industry are so bad at their jobs that if they were in any other job, they would be arrested or indicted for fraud.”

Scott cofounded Arizona Cyber Warfare Range – Metro Phoenix to help close that gap. The public – from employees already working in the field to parents who want to keep their kids safe on the Internet – can come to the 4,500-square foot building to try their hand at breaking into computer systems, cracking passwords and experimenting with malware.

The range, housed at Grand Canyon University near 27th Avenue and Camelback Road, opened this fall. It’s the second range operated by the Arizona Cyber Threat Response Alliance, a nonprofit group focused on addressing cyber threats in Arizona. The first range opened in Mesa about a decade ago.

“We are open to the community,” Scott said. “We don’t care if you’re old, young, wealthy or poor.”

The range serves several purposes, including introducing the field to potential workers.

The supply of cyber security workers is “very low,” and there are about 285,000 positions open in the field, including nearly 7,000 in Arizona, according to Cyberseek.

Cybersecuritymastersdegree.org lists the median salary for analysts in the Phoenix metro area as $76,300 annually, with the most experienced degree holders making up to $180,000 per year. 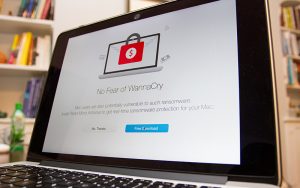 The WannaCry ransomware that attacked computer systems around the globe could be just a taste of things to come, say two Arizona cyber experts, who worry Americans are not prepared for such an attack. (Photo by Nathan J. Fish/Cronkite News)

Nick Flahiff, a volunteer at the range, said he works as a security analyst. He points out that people don’t necessarily need advanced degrees to enter the field.

“They need people so badly,” he said. “This is a field you don’t need a college degree. You don’t need any certifications. Really, all you need is hands-on experience.”

John Garduno, a sophomore studying cyber security at the university, said he became interested in the field after feeling vulnerable to cyber attacks serving during his time in the Marines. He said he wants to work at the FBI after graduation.

“To be an agent, you have to have either a cyber defense degree or criminal justice,” Garduno said.

Garduno said he sees cyber security as a financially stable career option, providing job security in the future with a well-paid position and benefits working for the government.

“There’s always new advances, new attacks, so you always have to stay on top of it,” he said. “Obviously, they only want the best.”

The program also can help individuals and companies, Scott said.

Lyn Harry White, a spokeswoman for Arizona Small Business Association, said the new warfare range is good for smaller companies that don’t have the resources to protect themselves from the dangers of hacking.

There are more than half a million small businesses in Arizona as of 2015, accounting for nearly one million jobs, according to the association.

“It’s frightening because Arizona is 90 percent small business,” she said.

Both ranges hold events and offer training sessions open to the public.