TUCSON – Sarina LaMadrid’s mother was in and out of her children’s lives.

At age 18, LaMadrid acted as a mother to her siblings, ages five, 10 and 16, all while juggling her senior year in high school and two jobs.

“A five-year-old, a little baby. I hardly saw her because I was always working, if not working, I was in school,” LaMadrid recalled, tears on her face, of those tough months one year ago. “I pretty much only saw her to go to sleep; if not, in the morning to take her to school. “I felt more like a parent than a teenager, and I was only 18.” 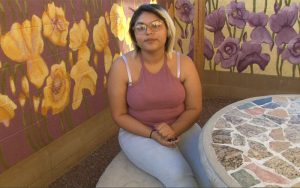 Sarina LaMadrid said the Youth On Their Own program helped her as she took care of her brother and two sisters while she was still in high school. (Photo by Drew Marine/ Cronkite News)

A Tucson program helped keep her on track. Some students in Youth On Their Own may live on their own, have lost their parents, or are homeless.

Guidance counselor, Ann Young, founded the program in 1986, receiving funding to house girls who were homeless, according to the website.

But she and volunteers realized students needed more help. Youth On Their Own was born.

Daniela Zasa, program manager, said the number of youth who are homeless in the area is hard to quantify because of the stigma around being homeless.

“We served 1,611 youth last year, which is a record high for us and we’ve seen this kind of growth every year, one to two percent. So, our task really is identifying those youth who qualify for services,” Zasa said. 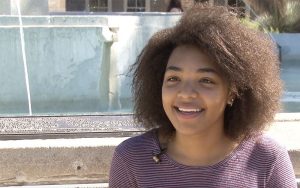 Kenadi Griffin, a freshman at the University of Arizona, said when her mother died, she moved in with her grandmother. The Old Main building on campus has become her favorite place because she meets there every week with her Youth on Their Own counselor. (Photo by Drew Marine/Cronkite News)

Kenadi Griffin is one of those students who hasn’t had the typical family life and received help from the program.

“I moved in with my grandma after my mom died. My dad was around for a minute…It’s always been me, grandma, dog,” Griffin said.

When it was time to apply for college, she knew she’d need more financial help.

Even though she was in a one-parent household, her grandma was still making too much for her to receive financial aid, but not enough to pay for her tuition.

Youth On Their Own stepped in. Workers helped her apply to the University of Arizona, and enrolled her in a program to receive stipends to help pay for books and her cell phone bill.

“If you maintain above a C, you get around $124 or $125 a month,” she said. “Students email their professors every month for their current grade and forward that to their Youth On Their Own mentor.”

The financial help is a relief, but the emotional support is priceless.

Griffin said hearing “how can we help you” was the best feeling in the world.

She thanks her mentor, Jacki Vaughan-Chaldy, for her encouragement. 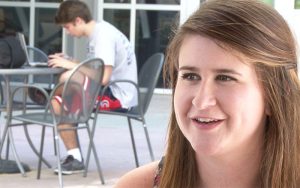 Jacki Vaughan-Chaldy, who is a coordinator for the Youth on Their Own program in Tucson, appreciates being a “cheerleader” for students. (Photo by Drew Marine/Cronkite News)

Griffin is now studying musical concepts at UA and is expected to graduate in 2021.

LaMadrid said weekly access to a “mini mall” at the program office, a small area behind a reception desk where shelves are lined with canned food, clothes and personal items like toothpaste, kept food in the house.

“Youth On Their Own did more than support a teen, they supported a family,” LaMadrid said.

LaMadrid, whose father was not involved in their lives, filed for custody of her siblings in July 2016. The youngest sister moved in with her father and the other sister is now living on her own.

LaMadrid will adopt her now 11-year-old brother and plans to attend her first semester of college in the spring.