“We were all hanging out, and we realized that there are no places open past midnight that serve desserts, and we took it a step further and decided, ‘Well, we’re up late. We want it delivered to us,'” she said.

Totally Baked, a delivery-only “ghost” restaurant, was born. Employees bake and bring desserts straight to customers on weekends between the hours of 7 p.m. and 4 a.m. 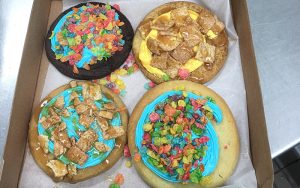 Totally Baked, a delivery-only “ghost” restaurant, bakes and brings desserts straight to customers on weekends between the hours of 7 p.m. and 4 a.m. (Photo by Timothy Johns/Cronkite News)

Ghost restaurants are starting to pop up across the country, especially in densely populated cities such as New York, Chicago and Los Angeles.

Ghost restaurants are a way for food businesses to save a huge amount of overhead, such as rent, according to fastcompany.com. A ghost restaurant such as Totally Baked really just needs a kitchen as small as 200 square feet to operate as a viable restaurant.

Here in the Valley, the trend of ghost restaurants is not as prevalent as it is in other, denser cities, according to the Arizona Restaurant Association. And for Brookes, getting Totally Baked off the ground wasn’t always easy.

“You have to believe in what you’re doing first and foremost. I just believed it would happen and everything fell into place,” she said. “It takes a lot of hard work. Hard work never fails.”

However, Brookes was not alone. Her friend Amy Newton believed in the vision, even in a city that is not known for being 24/7, and helped her to co-found the company.

“I knew her really well, and I believed in her so much that I kind of believed in whatever idea she had,” Newton said.

After a year in operation, Brookes said Totally Baked has performed better than she expected, and she plans on expanding the hours of operation in the coming weeks. In addition, Brookes has big plans for the company after she graduates from law school in the spring.

“Once I graduate, I think we will plan on moving into more of a retail, traditional space,” she said.