During a meeting at the Maryvale YMCA on Wednesday night, Christopher Dickinson, director of the Zip Code Project, addresses community leaders, presenting information about the project and possible solutions for addressing disconnected youth. (Photo by Lysandra Marquez/Cronkite News)

MARYVALE — Teen pregnancy, difficult living situations, immigration status and mental or physical disabilities are some of the reasons young people in the United States become ‘disconnected.’

According to Measure of America, ‘disconnected youth‘ is a term for teens and youth between 16 and 24 years old, and who are not enrolled in school or working a job. The Maryvale neighborhood has one of the highest rates.

To address the high rates of disconnected youth across Arizona, Christopher Dickinson developed and manages the Zip Code Project, a program started back in 2015 by the Arizona Department of Education to help engage youth through community projects.

“We’d like to see the Zip Code Project as a bridge between the youth and services,” Dickinson said. “We’re really about connecting them to the services, if it’s a dropout recovery program, an alternative school, a nonprofit that can provide services, we’d like to be that bridge.”

Previously, the Zip Code Project has been implemented into other communities in the state like Ajo and Chinle. After launching the project in Phoenix during April of this year, it’s now specifically targeting South Phoenix and Maryvale, which have some of the highest rates of disconnected youth per capita.

During a community event held at the Maryvale YMCA on Wednesday, local organizations were invited by Dickinson to learn more about some of the young people living in Maryvale, discuss issues affecting them and propose viable solutions.

Multiple nonprofits, including the Y Achievers and representatives from Student Choice High School, provided input and comments on what they believed to be the biggest challenges youth in Maryvale are facing.

“A lot of the youth that we have are in need of more of the soft skills, so, not only how to get a job, but also how to maintain a job and keep it, getting there on time,” said Brenda Guerrero, youth case worker for the Y Achievers program.

During her experience as a youth case worker, Guerrero often has to start with fundamentals in order to get the young adults she works with back on track.

“I have this youth, that has never worked, he is 20 years old. He doesn’t have a license, and he’s never worked. Closing that barrier, I have to start at the basic level,” Guerrero said.

Dickinson said he will be taking the suggestions and comments made during the discussion and developing short term and long term plans to implement the solutions. 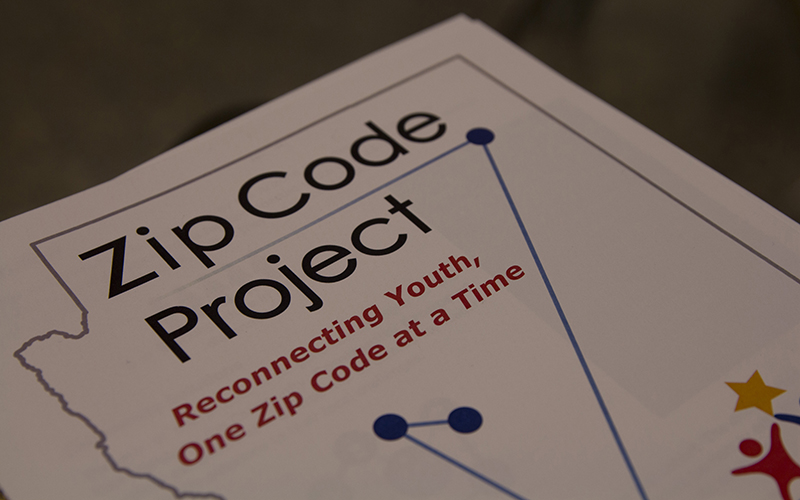 The Zip Code Project was started in 2015 by Christopher Dickinson in order to address the high rate of ‘disconnected youth’ in Arizona. (Photo by Lysandra Marquez/Cronkite News)

Dickinson, who initially started working on the Zip Code Project part-time, has now made it one of his full-time priorities, and through interactions with some of those affected, has found that it comes down to informing them about their options.

“A lot of these youth feel like they have no skills, they feel worthless, and they’re really not,” Dickinson said.

Dickinson shared an anecdote of a young man he met at a job fair who thought he didn’t have any skills.

“So, you say you have no skills, but in high school, did you learn how to use a computer? Yes. Did you play sports? Yes. So, I said, ‘Well you’ve got team building experience, and computer experience. You can literally get a entry-level job in IT, you don’t have to settle for literally nothing.'”

According to data gathered by Dickinson, about one in five young adults in Arizona fall under the category of disconnected youth, compared to Measure of America’s national rate of one in eight.

During the Wednesday night meeting, Alexis Clermont, state coordinator for homeless education, shared a presentation on youth homelessness, one of the factors contributing to the issue.

Another study by Measure of America, ‘Promising Gains, Persistent Gaps‘, finds that when it comes to the factors of race and ethnicity, rates of disconnection is highest among Native American youth at 25.4%, followed by Black youth at 18.9%, and Latino youth at 14.3%, compared against the U.S. total at 12.3%.

Dickinson is now setting his sights on other zip codes with high rates of disconnected youth including Kingman, Bullhead City, and South Tucson, among others. Another one of his plans is to partner up with Arizona State University to develop a team project revolving around the development of innovative solutions to the issue of disconnected youth in Arizona. He said he feels hopeful about the improvements the program can bring to communities.

There are plans to have a follow-up meeting in January of next year to continue moving the project forward and hopefully involve even more community organizations. 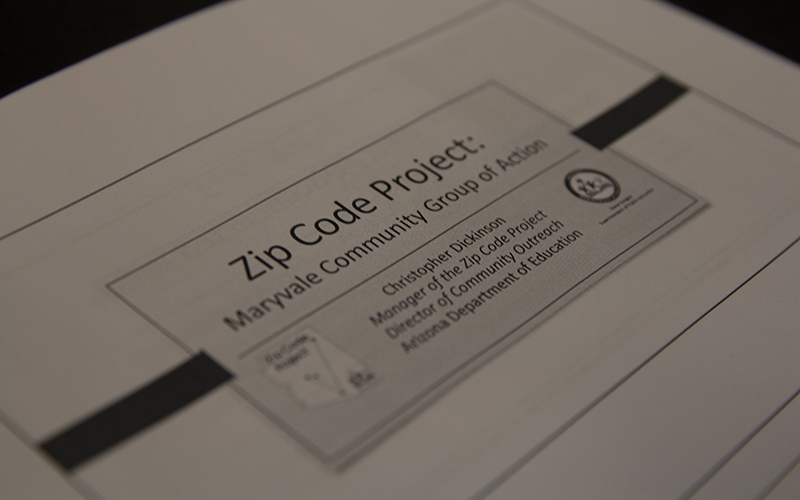 The Zip Code Project was started in 2015 by Christopher Dickinson in order to address the high rate of ‘disconnected youth’ in Arizona. (Photo by Lysandra Marquez/Cronkite News)