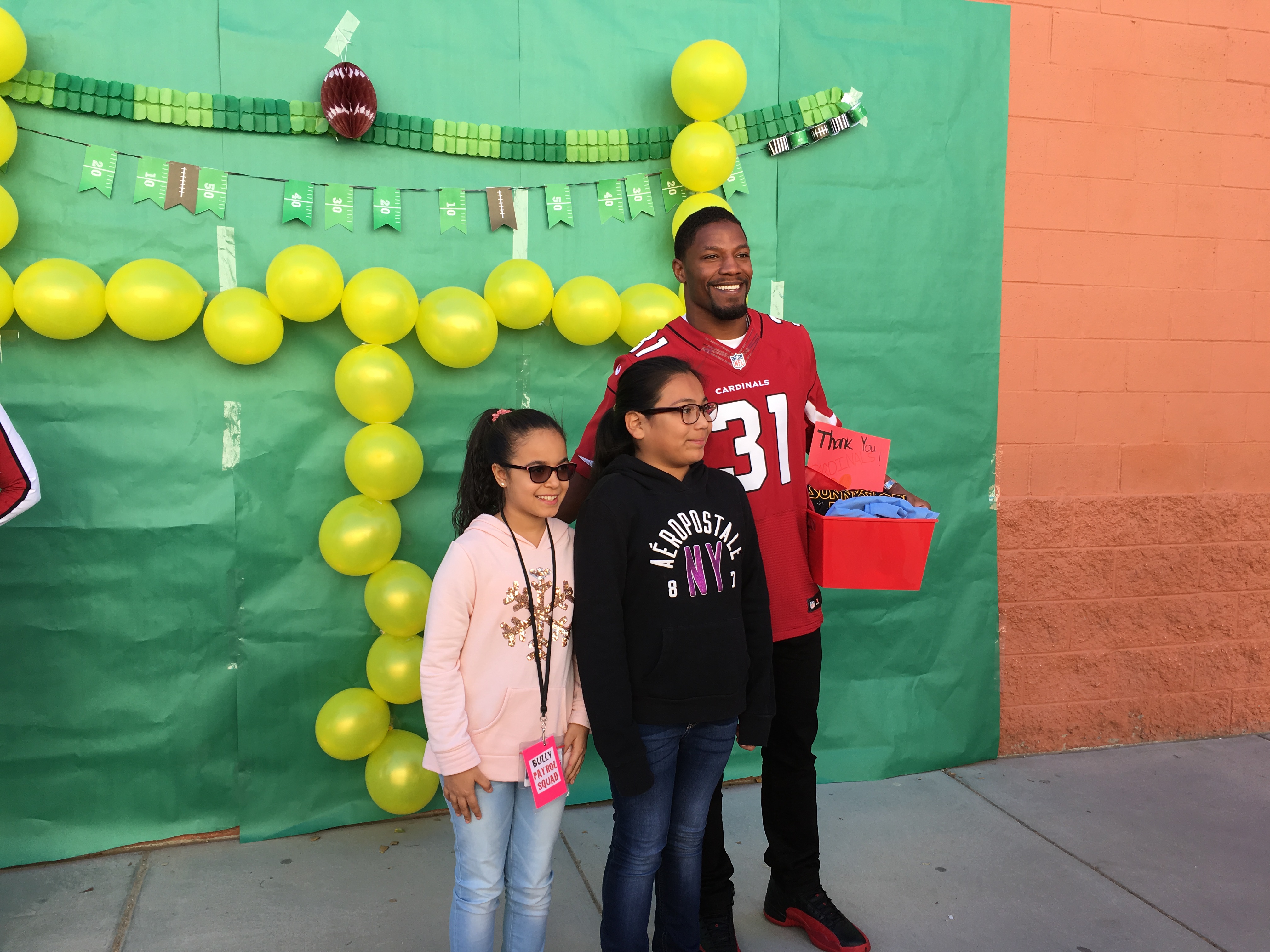 David Johnson was once a victim of bullying. Here he stands with winners of the “Run Thru Bullying” essay contest, Megan Torres (left) and Nubia Gutierrez. (Photo by Perry Cohen/Cronkite News)

A victim of bullying when he was young, Johnson decided to help spread awareness of the issue that affects kids across the country.

“Bullying is very near and dear to my heart just because of some unfortunate things I’ve had to go through, being bullied growing up,” Johnson said. “I always knew I wanted to impact kids and now, especially in our society, bullying has unfortunately been a big impact on students’ lives. I do what I can just to get the word out.”

During Cardinals training camp in August, Johnson and the team began its “Run Thru Bullying” campaign.

Participants from four Valley school districts visited camp to speak with Johnson about their struggles with bullying and to hear him talk about his experiences. Following the completion of the program, participating students were asked to write about their experiences.

Two Sunnyslope Elementary students, Nubia Gutierrez and Megan Torres, were named the winners of the “Run Thru Bullying” essay contest after their essay was reviewed by Cardinals Johnson, his wife Meghan, and representatives from the Cardinals and Cox Communications.

The grand prize: a party hosted by Johnson and Cox for nearly 500 children at Sunnyslope.

The party, which was held Tuesday morning, was highlighted by a speech from Johnson, reading of the winning essay by Gutierrez and Torres, and an outdoor lunch for all students provided by Raising Cane’s and Papa John’s.

Although the contest started three months ago, Johnson said reading the essays was well worth the time.

“I definitely feel like me and my wife made an impact in the community by getting the word out about bullying,” Johnson said.

Johnson said the winning essay stood out because it implemented what he spoke about during training camp.

Torres and Gutierrez both said they wrote the essay because they want to make an impact on others. Both girls were elated to win the contest.

“I felt really proud of Nubia and myself and wanted to make a difference and help other people,” Torres said. “It felt very nice.

“Kids at Hope (belief system) means that all students are capable of success, no exceptions,” Whiteman said. “That means we need to be anti-bullying because every student has the right to come to school and feel comfortable, because that’s the way students learn.”

Sunnyslope has created its own “bully patrol” led by the school’s resource officer, Jennifer Dodt.

The patrol participates in after-school classes to talk about kindness and helping, among other things that tie into bullying.

“The Kids at Hope philosophy is all about positivity and success in future destinations for all of our kids,” Whiteman said. “It doesn’t matter if you’re rich or poor, we think every child is capable of success.”

The message Johnson wanted to send to the students of Sunnyslope was to be kind and generous because you never know what someone has been through.

“I never want my son to grow up and deal with being bullied,” Johnson said. “I definitely want to talk to him because I don’t want him to be the kid that is doing the bullying.”

Johnson’s biggest advice was to stay strong and try to get someone you can lean on and someone that can help support you through the tough times.

“There’s a light at the end of the tunnel and you just need to get through,” he said.