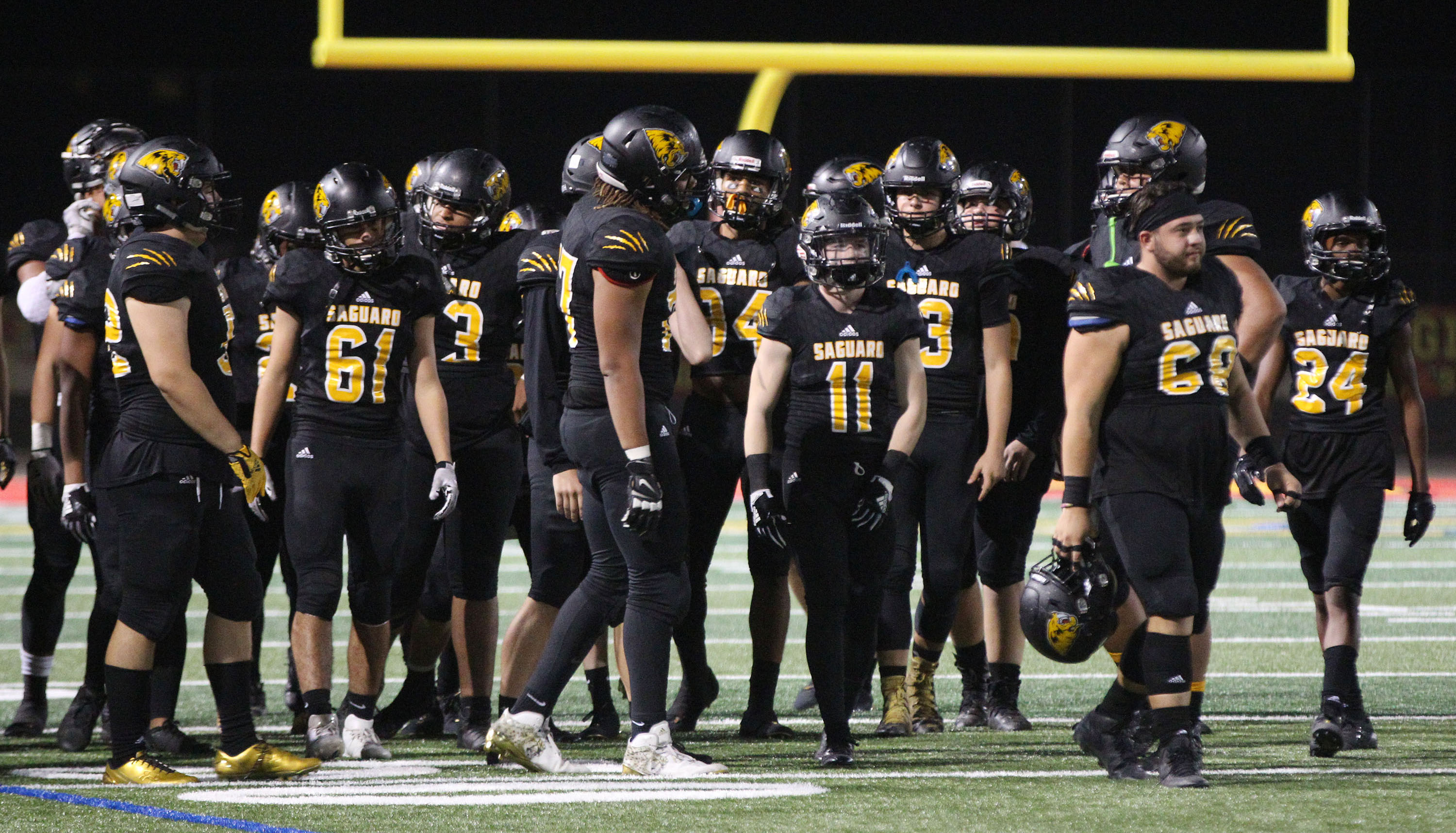 The Saguaro High School football team will play in the state 4A title game Saturday. Despite the program’s success, it with remain in the 4A because of enrollment. (Photo by Jamie Nish/ Cronkite News)

The 4A Sabercats will be looking for their fifth straight title. The 5A Coyotes have appeared in the championship game all but three times from 2006-2016.

Despite their domination, neither were moved to a new conference when the Arizona Interscholastic Association announced in October its realignment for 2018-2019 and 2019-2020.

The AIA goes through the realignment process every two years and is based off enrollment numbers. Jacob Holiday, president of the AIA Executive Board, said the process started in May and is time-consuming.

“There’s some schools who wish … to be in (a certain) conference,” Holiday said. “Some of them don’t want to be in that conference, some of them want to move up. The entire body can be a process, and we hope that each school is comfortable with where they’re at.”

Schools that moved to new conferences include Surprise Shadow Ridge (5A to 6A), Queen Creek Casteel (3A to 5A) and Peoria Sunrise Mountain (4A to 5A).

“I think going into the 5A division our first year with our first class of seniors is going to be eye-opening,” Casteel athletic director Ryan Ridenour said. “But at the same time, I think our coaches are prepared for it. They’re looking at it. They’re mentally and physically preparing the kids as much as possible.”

Shadow Ridge athletic director Matthew Kuffel said, “Coming from a background of (Glendale) Mountain Ridge and (Anthem) Boulder Creek, I can tell you that if our kids and our programs want to be recognized through the state, we have to prepare in order to compete against these programs. We’re no longer a D-3 school from four, five, six years ago. Our enrollment is up there and our community and our athletes have to prepare themselves for really tough competition.”

Despite Casteel not opening until 2015, the change did not come as a surprise. Its football program is coming off its first state title in school history, defeating Tucson Pusch Ridge Christian Academy 35-28 in the Division 3A state championship game Saturday. The varsity football program is only in its second year of existence but enrollment has jumped.

“I think that people around us kind of expected it,” Ridenhour said. “ People that have reached out to us want to play us now. It’s a level (where) we’ve got quite a few bigger schools around us that want to get in and compete against us and that, and take a shot. We’ve kind of made a name on the way up and I think people are going to want to come at us for a little bit.”

Although Casteel’s program, and success, is new, other high school athletic programs, like Saguaro and Centennial football, have been dominant for some time.

Saguaro has won nine state championships and from 2006 to 2016, there were only two seasons when the Sabercats did not win it all.

Centennial has won five state championships, with the most recent coming in 2015.

Both schools will be staying in their respective conferences for the next two-year block. Each have excelled in their conference, and according to azcentral.com, Saguaro coach Jason Mohns said the football program wanted to move up a conference, but was denied due to the AIA sticking to the formula that every sport in each school be moved up together.

However, Saguaro athletic director Kraig Leuschner said he never got a call to his office about the option to have one sport move up.

“I don’t know if it was taken out of context where it was a denial, there was no request put to move up to 5A for football only because it doesn’t exist,” Leuschner said. “I think some conversations that take place behind the scenes, you could call it being denied. I mean really, no, we didn’t make a formal requisition to go to 5A because we know the bylaws, we understand them.

“We know that you can’t just break off in one sport. If it was provided to us as an opportunity, or as (an) outlier of a program, we’d be able to consider it and make that request. … We know from a conference perspective, 4A conference, that football didn’t have the ability to break off. Otherwise, it would have.”

Although Leuschner believes that Saguaro football could still compete for a championship at the 5A level, he said he understands the formula the AIA has in place.

“We can’t make a decision for one that affects many,” Leuschner said. “We have other programs on campus that are growing still and we’re working on trying to get them back to where they used to be. A move to 5A would decimate other programs that are already struggling with numbers, so we expected 4A to happen.”

Centennial athletic director Brett Palmer echoed Leuschner’s sentiments. Palmer said he feels like some of Centennial’s athletic programs could probably compete in 6A. However, it was not a shock to find out Centennial would remain in 5A, Palmer said. The formula and process is one that Palmer believes is a good one.

When it comes to the formula, Leuschner said there are instances where it does raise questions. He mentioned the Phoenix Sierra Linda vs. Centennial football game earlier this year, where Sierra Linda forfeited due to concerns of player safety. He also mentioned games involving Saguaro when the score got out-of-hand.

“Forfeits aren’t any better for morale, or competitive edge, or anything like that,” Leuschner said. “We have played a couple of games where we’ve won by 60-plus points and our starters have been pulled by the third quarter, and quite frankly, we don’t belong in the same division as them in that particular sport. Whether that means they should be down, or we should be up, I couldn’t speak to that. But from around the way, coaches know where we are and where we belong.”

Although it has already passed for this year, there is an appeals process available that is heard by the conference committees. If the AIA denies the appeal, the school has another chance to be heard again to try and get it overturned.

Other factors are often part of the discussion when it comes to realignment, including location and socioeconomic status. Moreover, Holiday pointed to charter and private schools, the way their enrollment works, how flexible it is and how that could be a factor in the realignment process, as well as trying to figure out a way to accommodate it.

Holiday said it has been an ongoing debate for years. The opinions are strong from the two sides involved: charter/private schools and public schools. He said he understands that parents are just trying to do what is best for their kids, and their schools, but believes it is an issue that needs to be discussed.

“Eventually, I think somewhere down the road that needs to be addressed, and it may offend, it may hurt some people’s feelings on whether or not charter and public are at a level and equal playing field as those who are at public schools,” Holiday said.

In addition to the realignment placement done by the AIA, the 6A Conference voted to no longer give the region champions in any of the team sports an automatic state playoff berth, azcentral.com reported. For football, the 2018-19 school year will mark the beginning of just the top 16 teams in the AIA/MaxPreps power rankings qualifying for state.

For Kuffel, whose school is a part of 6A, he said the vote makes sense based off the fact that if a school wants to be recognized as one of the best programs, it cannot shy away from playing the best programs.

“You can’t wait and say, ‘OK, my schedule gets me in because I’m the region champ,’ and then you go ahead and face one of the top four teams in the state, and you’re not competitive,” Kuffel said. “We have to be able to set schedules that are competitive for who we are, as much as we can, but given the opportunity, we have to play some of those stronger teams because, as you know, everything’s power-point based. And if you don’t put in teams that have traditionally a high power-point ranking, you’re not going to go up there and make the postseason.”

All in all, the AIA realignment process does come with challenges, but many impacted believe it’s the best option the AIA has.

“The AIA is a mini-government and it has a legislative council that things need to be approved through, and that’s the proper way to do things,” Leuschner said. “Things should be approved and should be looked at by elected officials, so to speak, from region chairs and conference chairs because if they’re not, and we’re just making decisions site by site, there’s a lot more room for mistakes to happen.

“And the way that the AIA is set up, I know the AIA is sometimes victimized as having too much power, or they make a lot of these decisions. But people need to understand that a lot of the decisions made by the AIA are actually decisions made by the conference committees, which are comprised of region chairs and conference chairs from the around the state, which are site ADs.”

“Well I think that is how you create the equity,” Sunrise Mountain athletic director Matt Ernster said. “I understand that some schools are traditionally stronger than others in certain sports, but if you want to look at the entire athletic department as a program, looking at the overall enrollment numbers is probably the best way to go. Outside of taking every school independently and looking at their success, that would be a very long and probably argumentative process.”

Ridenour believes “that there are some exceptions, but I think it’s the fairest and most honest way to do it. If you’re exceptional, it makes you have to do it internally. I think numbers vs. numbers sometimes can be a challenge. If you’re equal numbers, then it’s on you to perform.”