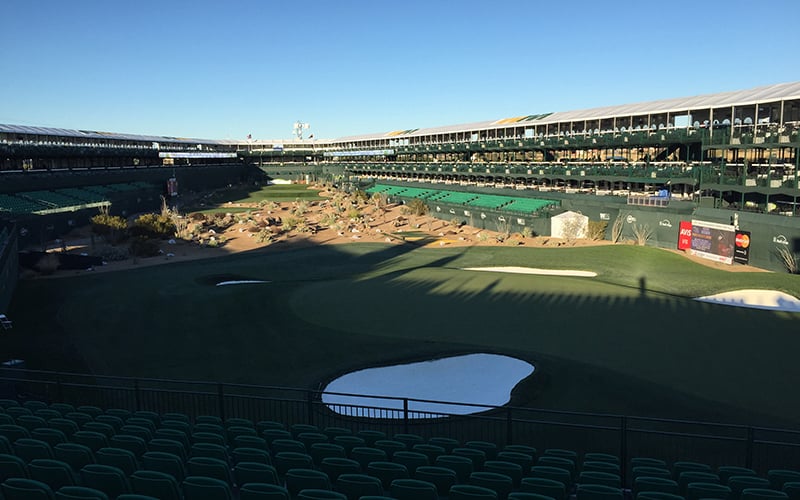 The 16th hole sat silent Tuesday morning, but by Thursday, it will return to its rowdy self at the Waste Management Phoenix Open. (Photo by Nick Krueger/Cronkite News)

SCOTTSDALE — Ever since Waste Management and the Thunderbirds partnered up for the Phoenix Open, sustainability and conservation have been a priority.

The 2017 Waste Management Phoenix Open was recognized as the first golf tournament in the world to reach GEO Certified Tournament status due to its sustainability efforts, it was announced Tuesday.

“With the case of the Waste Management Phoenix Open, it was very clear to us that this has been a high achieving sustainable golf tournament for a number of years, and that shows in the breadth and depth of what they’re doing,” Jonathan Smith said.

Smith is the executive director of the Scotland-based Golf Environment Organization, a group “dedicated to working with the industry to inspire, support and share golf’s commitment to fostering nature, conserving resources, and supporting communities,” according to its website.

The GEO certification is based on a variety of factors, including site protection and resource management, and is evaluated by third parties on site before, during and after events like the Phoenix Open and others.
“The process of evaluating is actually built on three years of program development,” GEO Executive Director Jonathan Smith said. “So it went back to defining credible industry standards for sustainable golf tournaments, that is kind of the foundation of which the certification is made.

The whole analysis of the supply chain and the way materials are looked at in terms of how they’re procured, what comes on the site, how it’s handled and then how it is recycled and the avoidance of the landfill.”

The recognition is a result of a partnership between the Phoenix Open and Waste Management that goes back almost 20 years, and culminated in Waste Management becoming the title sponsor for the event in 2010.

In 2012, the tournament began what it calls the “zero-waste challenge,” achieving and maintaining it every year since through diversion, despite being the highest-attended stop on the PGA Tour with over 650,000 people attending in 2017, said Waste Management communications manager Janette Micelli.

“That means, basically, that (waste) is recycled, composted, reused, stored for reuse, donated or goes back to waste-to-energy,” Micelli said. “We really try to use the WMPO as our case study, and really what you can do when you ignore the word ‘impossible.’ If you can do this here with 600,000-plus fans, you can do this everywhere.”

Achieving this zero-waste challenge every year is not just a partnership between Waste Management and the Phoenix Open but a joint effort between every sponsor and vendor that does business during the weeklong event.

Anything that is brought into the event needs to be able to be diverted from a landfill, such as being recyclable or compostable.

Other factors contributing to this certification are the efforts to offset carbon emissions and the conservation and restoration of water back into communities around Arizona such as the Colorado River Basin and the Verde River.

A press release regarding the certification claims the tournament offsets 720 metric tons of carbon emissions and restores over 63 million gallons of water.

“That was an opportunity that we saw with the WMPO, to be able to talk about water conservation and water reuse,” Micelli said. “We are in an arid desert climate, so to be able to talk about the water features and how we are recovering water from the kitchens, or beyond the tournament how we are giving back to local communities and investing into water restoration efforts.”

Colin Tetreault, who is sustainability scholar at the Julie Ann Wrigley Global Institute of Sustainability at Arizona State, says that while this is an impressive feat, it is not the only example of sustainability in sports.

“What I’ve seen in the last couple years in sport is a body that has evolved to understand what goes on beyond the physical competition made, and start to understand more how sports leave a legacy and an impact of good.“

Although the Phoenix Open is among the leaders in sports in this field, most major sports organizations are taking steps in this direction as part of an organization called the Green Sports Alliance.

The GEO, Waste Management and Phoenix Open hope that through education and awareness this tournament is something that will influence other sporting events and everyday people. around the world to move even more in an environmentally friendly direction.

“As part of a movement that’s taking place in sports, sustainability, there’s recognition that major sports events can connect with people on major issues that they may otherwise not be interested in,” Smith said. “I think the way that building on those foundations the organizers have taken, communicates out to spectators and really shows some leadership in the whole sustainable sport movement globally and that’s linked into the International Olympic community and the United Nations environment program. So, they’re walking the walk in a number of significant ways, and then they’re talking the talk and influencing and inspiring a lot of people about a lot of really important issues.”