The Mount Graham red squirrel is an isolated sub-species of the North American red squirrel. Its smaller body and narrower head distinguishes it from the species. (Photo courtesy of Phoenix Zoo)

Arizona Game and Fish Department officials said only about 35 of the red squirrels survived a July wildfire and its aftermath.

The species already had a tenuous hold on existence.

“For the last 15 or 20 years they have bounced around between 200 and 300 individuals on a single, isolated mountain,” said John Koprowski, a University of Arizona professor and director of the university’s conservation research lab. He has studied squirrels for 35 years.

The significant drop in population because of the Frye Fire added urgency to an ongoing conservation program at the Phoenix Zoo.

Stuart Wells, director of conservation and science at the zoo, is developing a federally sanctioned breeding program with its two females and three male squirrels.

But breeding red squirrels is not simple. The path has been marked by territorial aggression among male and female squirrels, bad timing and unanticipated complications like a broken air conditioner.

“The Mount Graham red squirrel is challenging because of the way we want to breed these animals to be reintroduced back in the wild,” said Wells, who was a doctoral student of Koprowski’s at U of A. “We want to maintain the attributes they already have that are necessary for them to survive.” 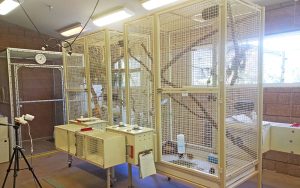 “If it’s the wrong time, in this setting, it is a possibility that they could injure each other or be killed,” Wells said. “But in the wild, if a male starts chasing after a female to see if she is receptive for breeding she can keep going – up a tree or out of sight. She’s not going to get cornered.”

Then, there’s the issue of timing.

To determine the appropriate time for breeding, the conservation center analyzes fecal samples, looking for hormone metabolites that indicate concentrations of estradiol, which can help determine when the females are receptive.

“It turns out they cycle about every 25 days,” Wells said.

Conservationists then examined aggressive behavior and determined when the squirrel’s estradiol levels were high, aggression was low.

Only two breeding seasons have passed, with the zoo breeding plan facing complications.

“The first season we had, which started in 2016 in May, our air conditioning went out,” Wells said. This year, the construction of a new room for the Mount Graham red squirrels disrupted the small mammals, which are behaviorally and physiologically sensitive to noises.

In 2016, one of the female Mount Graham red squirrels was impregnated, but she never birthed the offspring.

The goal: to bolster the zoo’s population to five males and five females and return a population back to Mount Graham by 2018.

The zoo’s breeding program is in conjunction with other conservation efforts to save squirrels who survived the wildfire on Mount Graham.

With the Frye Fire clearing much of the forest’s canopy, the Mount Graham red squirrel is much more susceptible to falling victim to a predator with better newfound visibility.

This will supplement stored food lost in the fire. Koprowski said some of the squirrels have radio collars that gives detailed information on survivorship, such as, if they get attacked by predators.

Koprowski said despite their efforts, extinction is a possibility. However, he said the species has been around for 10,000 years and survived similar conditions.

“Historically, there have been several mountain fires, so this species is a survivor,” he said. “We need to continue to try and assist them because this is a dire situation. I do think we have an incredibly resilient species here. There is still some habitat on Mount Graham and we can help augment the population.”

“I would not bet against the Mount Graham red squirrel.”