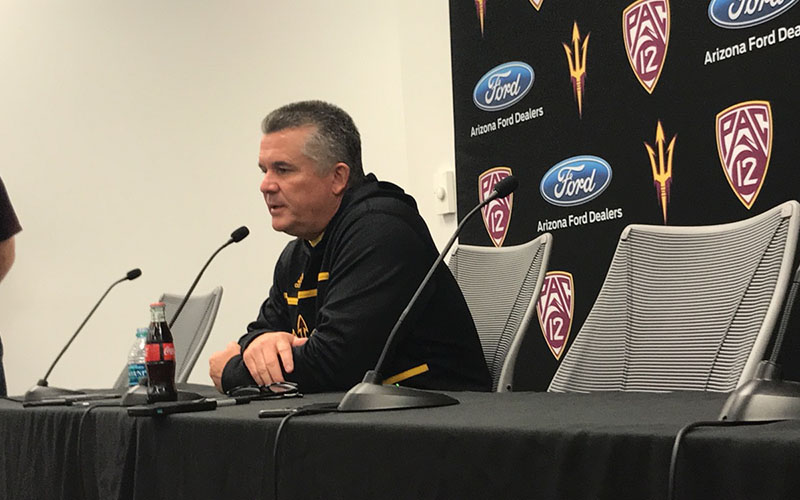 Arizona State fired Todd Graham Sunday. The school said it wanted a coach who could make the football program a top-tier one. (Photo by Jamie Nish/Cronkite News)

TEMPE — “You always want to leave a place better than you found it, and I really feel like we’ve done that.”

That’s what Arizona State football coach Todd Graham said Sunday in his opening remarks to a room packed with close to 50 members of the media just hours after being relieved of his position.

Rumors surrounding Graham’s job security have been floating around since the midway point of last season, reaching an all-time high after a 56-35 loss to the University of Arizona, resulting in the first and only year ASU didn’t qualify for a bowl game under Graham.

Exactly a year later, Graham and the Sun Devils reclaimed the Territorial Cup in front of a raucous home crowd. The hashtag among many ASU fans on social media became #KeepToddGraham.

He was fired the next day.

The news came as a surprise to many who had seen this season as a step in the right direction. After finishing last year with a 5-7 record, the worst mark under Graham and the worst for the team since 2009, the Devils improved to 7-5 with wins against No. 24 Oregon, No. 5 Washington and rival Arizona.

The team’s win over Washington was the first time the program defeated a Top 5 team in more than 20 years, and the October 21 victory over Utah marked its first win on the road against a Pac-12 opponent since 2015.

“We want to compete for championships and we want to win consistently across the board in all of our sports,” Anderson said. “In … football, we have not done that in the four years since I’ve been here, not consistently. We have been average, 7-5 and second place in a riddled Pac-12 South is not our aspiration.”

It is worth noting that the team ASU finished behind, USC, is currently ranked 11th in the country after finishing with a 10-2 record behind a quarterback that will potentially be the first pick of the 2017 NFL Draft.

Many believe Graham was right when he said he is leaving the program in a better place than he found it.

Since Graham arrived, Sun Devil Stadium has been and is continuing to be remodeled, the program saw state of-the-art facilities added before the season and the team posted a 3.0 student GPA, a program record and noticeable improvement over the 2.2 GPA Graham said the team had when he arrived.

And his 7-5 record is better than all but one of predecessor Dennis Erickson’s five seasons as the head of the team.

Graham helped return the program to relevance in his first three seasons, including posting back-to-back 10-win seasons that saw the program return to the Top 25 rankings, and a preseason ranking of 15 heading into the 2015 season behind strong recruiting.

Since then, the team has been stuck in mediocrity, winning 18 and losing 19.

Even though he was fired, Graham said he holds no resentment toward the program.

“I’m a Sun Devil, and I think I always will be,” Graham said. “I didn’t build this place to tear it down. That’s what I told the players today. This place is not about one person, this place is about a set of values and what it means to be a Sun Devil.

I’m really proud of what we’ve done here. We have won everyday I’ve been here. I am so looking forward to seeing the great things ahead for this program.”

Graham will be allowed to coach the team in the bowl game it has earned, and he said at this point he just wants to finish what he started.

What’s next for Graham?

“I’m going to coach until they throw dirt on me.”

For ASU, the search for the next coach is on.