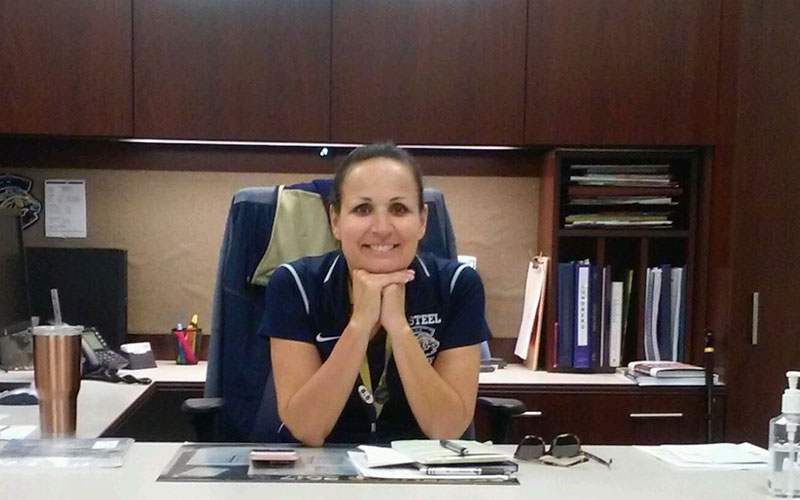 That is why, when Lundberg was diagnosed with Stage 4 cancer in September, she said she did not view it as a worry. She viewed it as another obstacle she would overcome.

“The hard part is you don’t know how people are going to respond with the diagnosis of Stage 4 cancer,” Lundberg said. “Once upon a time, that used to be very negative, and with all the advancements in medicine, it’s not like it used to be.

“So my biggest worry was I didn’t want people to be, ‘Oh my gosh, oh poor Sandy.’ Nothing like that. … It’s just a hurdle we got to get through. We can do this, we can beat this. It’s a challenge that we have to work on.”

Lundberg, whose football team plays in the 3A title game Saturday, learned of her diagnosis after dealing with pain in her back and hip, which she initially assumed was just a pinched nerve. After doctors did an MRI, it showed multiple tumors and Stage 4 cancer.

It was a shock yet she has maintained a positive attitude throughout. Breaking the news to her loved ones was difficult, but she tries to constantly tell them everything will be fine.

“(They) can’t believe it, because I’m very young and how do you have lung cancer, and I’ve never smoked,” Lundberg said. “It’s all those shocks, things that the people that you love, come through with. And then reassuring them that it’s going to be OK and it is going to be OK.

“This isn’t something to be afraid of. It’s just something that’s a challenge we’ve been given, for whatever reason, that we just got to deal with and get through.”

One of the ways Lundberg has been able to deal with it is through Casteel’s varsity football program. The 13-0 Colts often demonstrate the relentlessness and fight Lundberg has displayed when they are on the field.

The program is in its third year, with this season being the second for varsity. It will be competing in the Division 3A state championship game against Tucson Pusch Ridge Christian Academy (13-0) at 6:30 p.m. Saturday at Gilbert Campo Verde High School. The team she has around her has helped tremendously, Lundberg said, in her ongoing battle with cancer.

“Knowing that you’ve got great people with the team, I had no doubt that we’d be in the state championship with (coach) Spencer (Stowers) at the helm, and his crew and knowing the kids and all of that,” Lundberg said. “And being out and running the school, my team with (athletic director) Ryan (Ridenour), and (assistant principal) Tom (Dunn), and my (assistant principals), and all of that; they’re great people. (That’s) where you can be at peace and (be) confident that things are going to be OK.”

No guideline exists on how to deal with cancer, no way to prepare for such a thing. Fear can be diminished when surrounded by people who care.

“The response from the program and kids has been amazing,” Lundberg said. “I never expected to have that kind of outreach and support. … Just from the personal, ‘Hey, Mrs. Lundberg, we’re there for you,’ all those kinds of things has just been unbelievable. Very touching, on my part, (and) humbling to think about that.”

Casteel Colts quarterback Gunner Cruz said he still can remember when he, as well as the rest of the team, first heard of Lundberg’s diagnosis.

“Coach Stowers actually told us all at a practice one day when we were right at the end of practice, and I just could tell like the whole vibe the whole team gave off turned a little bit,” Cruz said. “But within a day, or two, it went from we were done sulking about it and we decided, ‘Hey, she can get through this.’ She’s the toughest person I know. We all just decided we were going to back her and be there for whatever she needs.”

Not only has the football team played a role in helping Lundberg, but she is one of the main reasons why Casteel football has been a success on the field as well as in the classroom.

“The best advice I got as a young coach several years ago was actually from (current Mesa Desert Ridge High School football coach) Jeremy Hathcock and he said, ‘Never stay at a place with poor leadership, (or) poor administration because they really are the backbone of athletics and academics within the school,’ ” Stowers said. “And when I interviewed with Sandy (Lundberg), it was a very small interview and Sandy was there. And I knew right away she was going to be very influential and incredibly supportive of the athletic program, and especially football.”

“To have her leadership and to have her mentorship has meant the world to me.”

“Relentless drive,” Ridenour said. “The expectations are so high and there’s not a bit of wavering at any time.”

“Her competitiveness,” Stowers said. “She’s very competitive and you can appreciate that about somebody because when you’re a competitive person, you set high expectations for yourself, and it’s not just in athletics, it’s also in academics.”

“And she loves to see our students compete in the classroom, and compete in whatever arena they’re (in), in terms of athletics. That part’s a lot of fun when you’re a competitive person yourself, that you have a principal that is all in athletics.”

“I think she knows my players as well as I do,” Stowers said. “When you have an administrator who knows all your players by name, who knows your strengths and weaknesses, what they’re doing in the classroom, community and the field, it really allows you to bounce things back and forth off one another.

“And try to create a program that’s community-based, and not just, I guess, our own little entity. She’s really been not only just an administrator, but a coach and a teacher and a great friend of mine I know that’s supportive of all the players.”

“Anything that she asks someone else to do is not anything she wouldn’t be able to do herself,” Cruz said. “Especially with all her complications that have kind of started lately, to be able to see the way that she continues to lead, and continues to have a positive attitude, she really practices what she preaches and it touched all of us.”

As Lundberg continues to undergo treatment, early indications suggest the treatment is working, she said. They will know officially in about another month when doctors perform another test scan.

While undergoing treatment is a part of the process, Lundberg said what Casteel’s football program has accomplished has provided her with an emotional getaway.

“It’s a nice reprieve,” Lundberg said. “You can get away from seeing the doctors, and the medicine, and (so on). And just really enjoy the beauty of what athletics brings, which is (to) keep working hard, seeing what they can do, doing things that they didn’t even think they could do. Good healthy competition between teams, all of that.”

The football program’s success has helped keep everything in perspective, Ridenour said, but also “gives you that out that we all need at different times.” It has allowed for a freedom space, Ridenour said, where there is comfort and people working together and following the same direction.

As the state championship game nears for Casteel, Lundberg’s ongoing fight with cancer does add some extra meaning to the game, Cruz said.

“In a way it does because Mrs. Lundberg has always supported us in everything we’ve done,” Cruz said. “Whether it be in the classroom, in the community, on the field, she always makes sure we have everything we need. She’s always out there supporting us. It would mean a little bit extra to be able to bring (the championship) home.”

When they play Saturday, the Casteel football players will have a piece of Lundberg with them on the field. They wear a shield on their helmets with the initials “SL” on them, for Sandy Lundberg.

Regardless of the outcome, what Casteel football has done for the school, and for Lundberg, will not go unnoticed.

“I don’t know that words could describe how special it is,” Lundberg said. “It’s unbelievable. I’m blessed to be able to have a part with the football team and to have a relationship with all the players, and with Spencer (Stowers) and his crew. There’s not many people that get to do that.

“If there’s blessings through cancer, that’s one of them for me. That’s huge. It’s just amazing to get to have that relationship and just experience that.”

A fundraiser is scheduled for Saturday, December 2, from 8 a.m. to noon at Casteel High School to help with Lundberg’s rising medical bills. The school is at 24901 S. Power Road in Queen Creek. Contributions are also being accepted at a Go Fund Me Account. To contribute, visit https://www.gofundme.com/sandy-lundberg039s-fight.