Mia Zavala, 21, identifies as Mexican and Taiwanese. Growing up, she was bullied for the way she looks, but she’s optimistic about multiracial individuals being embraced by society. (Photo by Lysandra Marquez/Cronkite News)

According to the U.S. Census, in the year 2000 about 6.8 million Americans marked two or more races, and by 2010, that number increased by a third, up to roughly 9 million.

Fuentes, 32, grew up in Mesa, in a primarily white neighborhood, with a Hispanic father and a biracial mother with a Native American and white background. She said her mother often told her to suppress her mixed heritage.

“Everything that was Hispanic about me, she would point out and make it bad, and make it negative. So, I was always very apprehensive to even identify as what I was, because she was very negative against anything that came from my father,” she said. 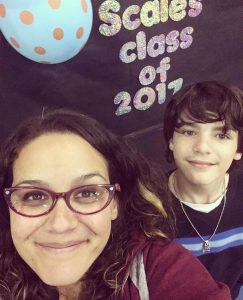 When talking about race with him, she describes their conversations as “open.”

“It seems like his generation, they’re all mixed, so there’s a little more camaraderie. Because he has that privilege of being white, I try really to remind him frequently, through conversations of ‘you need to be aware of how you’re acting, or how you’re respecting people, and it’s very much so about humanizing the person and how you treat humans in general,'” Fuentes said.

Fuentes said her son, despite being multiracial and looking white, still holds enough Native American blood to qualify for health benefits. But her experience with the health care system there has consisted of having her son’s race questioned.

“I’ve taken him to the Indian hospital and they even look at him like, well, he’s not … he doesn’t look Native American,” she said.

The topic of multiracial families is also being explored at Arizona State University.

Doctoral student Annabelle Atkins is researching multiracial Americans through her Multiracial Families Project. Having grown up within a multiracial household, she already has personal experience with the subject.

“My mother is Taiwanese-Chinese, and my father is white, so I am multiracial, but I never thought to identify that way because it wasn’t a very popular term when I was growing up,” she said.

Atkins said the idea to explore the topic further came from a question her advisor asked her.

“He said to me, ‘how did your parents teach you about being multiracial?’ And I stopped for a second, and I was like, ‘Nobody’s ever asked me that before, and I don’t think they ever really said anything about it,'” Atkins said. “So that was kind of shocking to me that I never had this opportunity to talk about my identity with my parents.”

Although Atkins had already looked into Asian-American parents, she thought to broaden the scope of her study.

“Since I was already studying socialization, I thought, maybe I need to study this with multiracial families because it’s important that they have an opportunity to talk about their identity with their parents,” she said.

In order to find families to talk to, Atkins said she plans to attend cultural events all around the Phoenix metro area.

Those families would include those like first-time mother Mai-Linh Le, who identifies as Asian-American.

Le anticipates talking about race with her daughter, who is almost 2 years old, will be more about teaching her to be open to different cultures.

“I want Claire to be open, welcoming, and understanding of where people come from, some of the differences, and understanding and appreciating those things, just so we can try to combat against this trying time that we’re living in,” she said. 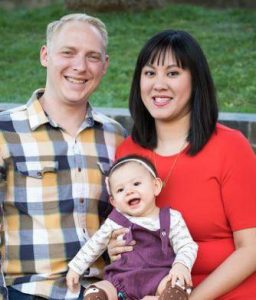 Mai-Linh Le with her husband, Tyler Sadler, and their daughter Claire. (Photo courtesy of Mai-Linh Le)

Back in 2015, a Pew Research Center analysis of census data estimated that 14 percent of infants born in the United States were “multiracial or multiethnic,” tripling the share in 1980. The same study correlates the growth of multiracial infants, with the increase of mixed-race marriages, just like Le’s family.

Le’s daughter, Claire, is biracial, being half Vietnamese and half Caucasian, and while she doesn’t think her daughter recognizes races, she anticipates some questions in the future.

“I think when she starts asking about why mommy and daddy don’t look the same and things like that, we will definitely address that and talk about where people come from, and how people came to live in America, specifically in Arizona,” Le said.

Mia Zavala is part of the young generation of Americans who consider themselves multiracial.

She identifies as both Mexican and Taiwanese, and while she said the topic of race was discussed within her family, she took it upon herself to explore her heritage.

“(My parents) talked to me a lot about where my grandparents came from in Mexico and where they came from in Taiwan, and that’s pretty much it,” she said. “What I learned about the Hispanic culture was mostly just living in that community, and I also did an exchange year in Taiwan in high school to get a sense of that culture.”

By the time she attended college, Zavala says she initially found it hard to connect to her Asian roots. 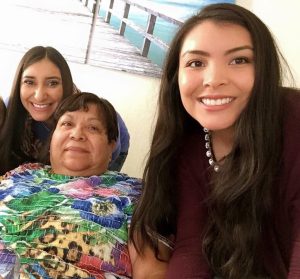 Mia Zavala with her sister and mother. (Photo courtesy of Mia Zavala)

“When I came to college, I really wanted to get in touch with my Asian side, but I felt like I wasn’t Asian enough. There would be comments that would be said, like, ‘Oh you don’t look Asian enough,’ ‘You’re not Asian,’ and that’s really hurtful,” Zavala said.

When traveling to Mexico, Zavala said she has also experienced difficulties with connecting with the Hispanic community there.

“I have been to Mexico a couple of times and my Spanish isn’t very good, and they would say things like, ‘How can you say that you’re Mexican, when you can’t speak Spanish,’ and that’s hard,” she said.

Despite the struggle she has faced, Zavala has a more optimistic outlook now that she’s a bit older.

“I don’t feel bad about myself anymore. I think people that are biracial or multiracial should be more accepting of themselves too. I don’t feel like our generation is having as many problems or issues with that anymore,” she said.

From a parenting perspective, when it comes to the future and how she’ll address her son’s questions, Fuentes prefers to focus on the big picture.

“I try really to remind him frequently, through conversations, you need to be aware of how you’re acting, or how you’re respecting people, and it’s very much so about humanizing the person and how you treat humans in general. That’s really what we focus on, his development and his appreciation of individuals,” she said.