‘I have nothing to say’: Graham mum about job speculation 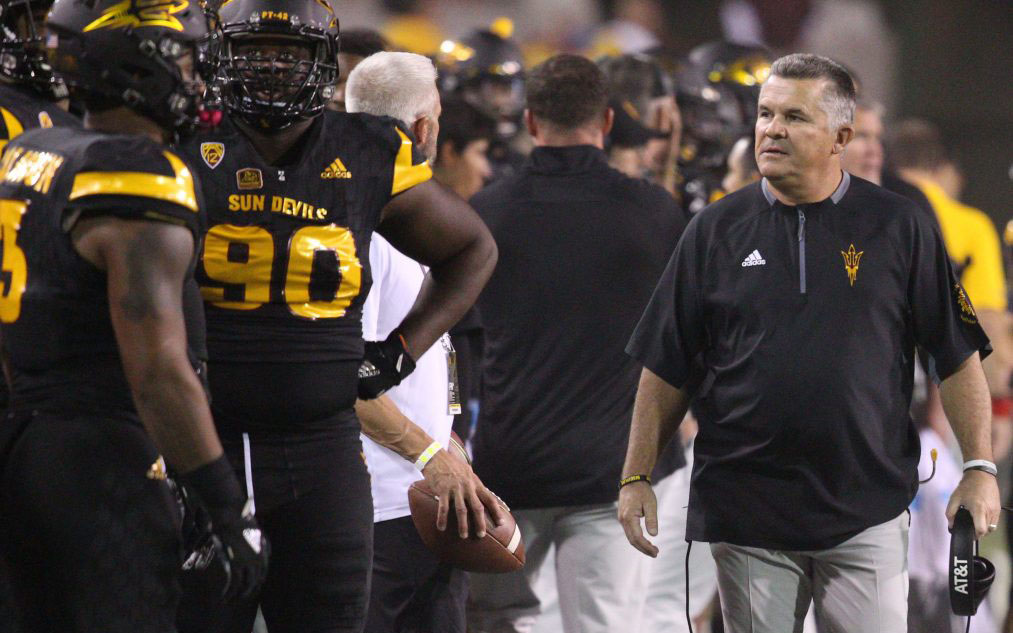 ASU coach Todd Graham had no comment when asked about his future in Tempe. Speculation has picked up with the team’s regular-season finale again Arizona approaching. (Photo by Jamie Nish/ Cronkite News)

TEMPE — From national media voices to Arizona State football fans, debate has resumed about the future of coach Todd Graham.

ASU is 6-5 with one regular-season game left in a schedule that includes victories over No. 5 Washington and No. 23 Oregon but losses, too, to San Diego State and Texas Tech.

Job speculation was front and center during Graham’s Monday press conference when a media member asked him if he thinks he is coaching for his job.

“I have nothing to say about that,” he said.

Because they have struggled to reach elite program status, the Sun Devils always have “double trouble being relevant, and the end of the season could mean a lot for ASU,” Jon Wilner, longtime Pac-12 reporter for the San Jose Mercury News, wrote via email.

ASU faces Arizona Saturday in the Territorial Cup at Sun Devil Stadium. It is coming off a victory over Oregon State, which made the Sun Devils bowl-eligible and guaranteed a winning conference record. Graham has three seasons remaining on his contract but that hasn’t stopped speculation, especially with the availability of several high-profile names. Former Oregon coach Chip Kelly is being courted by Florida and UCLA, according to reports, and at least one national journalist believes ASU could be in the mix.

“I could see Arizona making a big move for him if Todd Graham doesn’t have a big bounce back this year, and a return to the Pac-12 might be tempting,” Sports Illustrated’s Bruce Feldman wrote earlier this fall.

The last two seasons have been tough for the program with the team posting consecutive losing records. It hasn’t always been that way.

Its high points started right away for ASU when Graham, who is now the third-longest tenured coach in the conference, was hired in 2012. The team went 8-5 in his first season, getting a win over Arizona and winning a bowl game against Navy.

The Sun Devils hit their peak in the Graham era from 2013-14 as they went 20-8 with an appearance in the Pac-12 Championship game in 2013 and being ranked sixth in the nation in the College Football Playoff rankings in 2014. One of the most impressive on-the-field accomplishments for Graham was changing what many felt was ASU’s identity of committing a high amount of penalties. Under Graham, ASU has become one of the least penalized teams in the nation.

The Sun Devils fell off a metaphorical cliff after they received that ranking. The team lost to Oregon State the next week and haven’t looked the same since, going 19-20 since then. ASU hit a low last year and went 5-7 with only two wins coming from within the Pac-12, and losing badly to the Wildcats 56-35. Arizona didn’t pass the ball for the entire second half.

Despite some harsh criticism from media — CBSSports.com’s Pete Prisco tweeted, “Go tell (athletic director) Ray Anderson it’s time for Graham to go” — players have come to Graham’s defense, including linebacker D.J. Calhoun and defensive lineman Tashon Smallwood. Both seniors said they are grateful for how Graham has helped them grow not only on the field as athletes but off the field as men.

“I feel like God put me here under him for a reason,” Smallwood said. “Things were tough, things weren’t always easy but man, I can tell you I have grown. I have gotten a lot stronger since being here.

Calhoun said Graham is “very family oriented … even when I have a baby or whatever he always wants me there for the kids and everything. You know it’s not just all about football. He wants you to get good grades and stuff, too. He just wants you to be an overall good great person.”

Although the two don’t always see eye to eye, Smallwood said, he loves Graham and “wouldn’t wish for another coach.”

Meanwhile, Calhoun said that Graham should have a chance to stay another year. On-the-field growth and getting his players on the right track aren’t the only things that have improved. Grades have, too. ASU posted a 3.0 GPA average among its players for the first time ever and graduation rates are up.

“We ask these players academically to perform differently… these guys, they’re studying, they’re competing in classroom, they aren’t just passing in the classroom and it’s probably one the hardest things they do,” Graham said. “I know guys that go to the NFL and they’ll come back and go, ‘Man coach it is so much easier ‘cause you don’t have all that class and all the things you have to do.’ ”

Graham also played a large role in the revamping of the training facility and renovations of Sun Devil Stadium. More boosters have returned to put money into the athletic department and he has been heavily involved with the community.

Yet ASU’s inability to get over the Top 10 program hump continues to be an issue. Wilner said that the ASU program for decades have been viewed as a “second-level program, with largely untapped potential.”

A lot will become known in the remaining weeks.

Before Saturday’s victory over Oregon State, Wilner said, “If they win the last two and win the bowl game and are 8-5, then you combine the strong finish with the new facilities and Graham can make the case for legit momentum.”