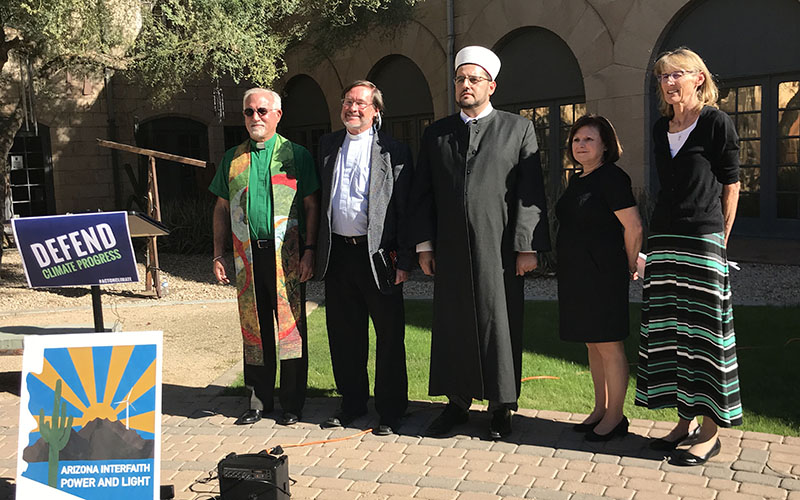 “We can feel thickness in our throats, and we can feel tightness in our chests,” Sharfman said. “Something is happening to our planet.”

Advocates of the Clean Power Plan said it was a worthwhile, ongoing effort to fight global warming.

The Rev. Stephen Keplinger, of Grace St. Paul’s Episcopal Church, said he is grateful McCain and Flake “for stepping beyond their political party to make statements of what they believe is morally right and ethical.”

“Now they need to take the next step and actually create the legislation and make things happen,” Keplinger said.

Imam Didmar Faja, of the United Islamic Center of Arizona, said at a news conference in central Phoenix, that there are human costs to the rollback. The Arizona Interfaith Power and Light Network set up the conference.

McCain and Flake did not respond Tuesday to requests for comment but had expressed support for the planned rollback.

“This onerous rule would have created millions in compliance costs for Arizona utilities, which would have been forced to pass on costs to Arizona consumers in the form of high monthly energy bills,” McCain said in a statement in October. “The result would have been especially harmful to low-income families who are least able to afford electricity double-digit rate hikes.”

Sharfman, a rabbi for Congregation Kehillah, said that business interest should not take priority over health and safety.

“When in the face of environmental crisis, we do not take action to preserve our world,” she said, “Over the past 150 years we have burned so much fossil fuel and destroyed so much planet life, that we’ve thrown our planet out of balance.”

Keplinger believes leaders have a moral, ethical and spiritual obligation to reverse the destruction of climate change.

“In our own time, the most heinous segregation of all is the one we have built ourselves and the rest of the planet,” he said.

Keplinger said the segregation has allowed us to defile the air, the water and the land in “unspeakable ways.”