‘We would play on the moon’: Coaches OK with prep title games in Tucson 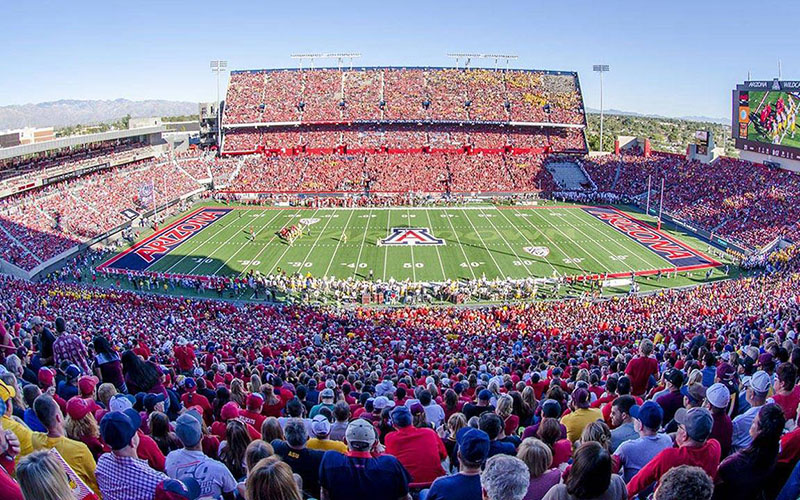 Arizona Stadium in Tucson will host the 4A, 5A and 6A high school football state titles games. The last time a championship game was in Tucson was 2009. (Photo courtesy University of Arizona athletic department.)

The 4A, 5A and 6A championships are set for Arizona Stadium, the home field for the Arizona Wildcats. Why?

The games needed a home.

“The Cardinals have three games in a row during our state championship time,” said David Hines, the executive director of the AIA. “ASU we have used a lot but they are beginning their fourth year of construction.

“We reached out to Tucson and they were thinking of doing construction, but they didn’t have enough time between the end of their season and their bowl game that they have this year, so they were kind enough to allow us to play those three games there.”

The last high school championship game at Arizona Stadium was a meeting between Tucson’s Canyon Del Oro and Sabino. Kadeem Carey led Canyon Del Oro to a 40-0 victory, rushing for 246 yards and five touchdowns before playing for the Wildcats and the NFL’s Chicago Bears.

Since then, the 6A championship game has been played in Glendale at University of Phoenix Stadium.

It’s a challenge to find a consistent location, Hines said, because the AIA is at the mercy of big stadium availability.

In the past, the three upper-level games were at different venues. The 4A and 5A championship games were played at the home field of the higher seed.

“The thing that is kind of an advantage at U of A is that they have a turf field,” Hines said. “So we can play multiple games without being concerned that we tear up the turf.”

Although there are many powerhouses in the Valley that usually have success in the playoffs, Hines is not worried about fans making the trek south.

“On a busy day you can almost get to Tucson faster than you can get across the East Valley to the West Valley depending on traffic,” Hines said. “We have some teams that haven’t been there or been there in a long time, and sometimes if they get there, then the enthusiasm with their community is a real benefit for state title games. There is an opportunity to see three games.

“We have very good talent at the 4A, 5A and 6A level. It’s an opportunity to see some of these kids before they move on through the college ranks and maybe even professionals.”

The semifinals are being played this weekend.

Tucson’s Cienega High School has the No. 1 seed in the 5A bracket and has the rare chance to play at home should it make it to the championship game. It faces Scottsdale’s Notre Dame Prep Friday for the right to advance.

Peoria Centennial is the No. 2 seed in the 5A. It faces Peoria Liberty. Centennial coach Richard Taylor said that the location of the title game will have no affect on his team.

“I would love to stay in town if we are fortunate enough to get that far, but if we get that far, we would play on the moon,” Taylor said.