The restaurant and bartending industry has embraced the latest automation trend: robotic bartenders. The technology has cropped up at several Valley establishments, including Sorso Wine Room at the Scottsdale Quarter.

Since opening a few years ago, Sorso has featured an automated wine dispenser that allows customers to choose from up to 32 wines from around the world.

Sorso’s co-owner Mark Teahen said after retiring from professional baseball, he went on vacation with his wife in Italy. That’s where he first came across an automated wine dispenser.

“We didn’t have much experience with Italian wine, so we really enjoyed our experience of going through and tasting a bunch of different varietals,” he said. “So, ultimately, when we decided to go down the path of opening a wine bar, this was kind of the center of that.” 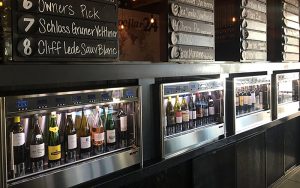 Since opening a few years ago, Sorso Wine Room in Scottsdale has featured an automated wine dispenser that allows customers to choose from up to 32 wines from around the world. (Photo by Tim Johns/Cronkite News)

At Sorso, customers put money on a card, which they slide into a credit-card sized slot on the wine dispenser. They can place their glass under a nozzle and press a button to dispense whatever type of wine they want.

In central Phoenix, places such as The Park and Zpizza feature automated beer machines. Representatives from the Arizona Restaurant Association said this trend toward automation will continue to expand.

Restaurant and bar owners said the automation can save time and money, as well as improve overall efficiency.

However, that isn’t to say people haven’t pushed back. The technology doesn’t yet allow for mixed drinks.

And, well, at the end of a long day – or after a bad breakup – you can’t pour your heart out to a machine.

“People do go out for conversation and human interaction,” said Joey Mills-Villegas, the general manager at Sorso Wine Room. “I think people could just cook at home if they wanted to avoid it that much.”

People have expressed fears as robots replace jobs in many service-related industries. A recent report from consultancy firm PwC indicated that 38 percent of U.S. jobs will be at high risk for automation by 2030. And world-renowned physicist Stephen Hawking recently told WIRED magazine that robots may “replace humans altogether.”

Mills-Villegas said he believes that natural craving for human interaction will keep the bartending industry from going completely automated.

“People who may or may not be afraid of what’s coming shouldn’t be, because there’s nothing to replace human interaction,” he said. “People always want companionship, friendship, and I think that it’s going to be around a lot longer than any of this.”