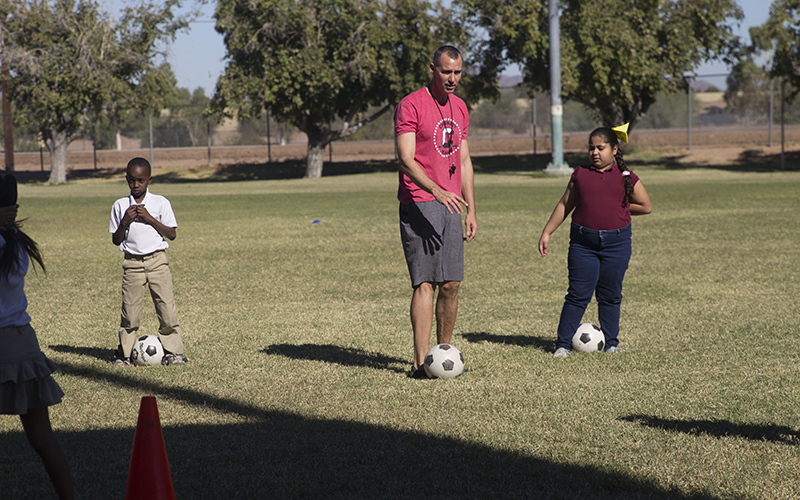 Josh Meibos tells students to kick a soccer ball with the inside of their foot. (Photo by Paola Garcia/Cronkite News) 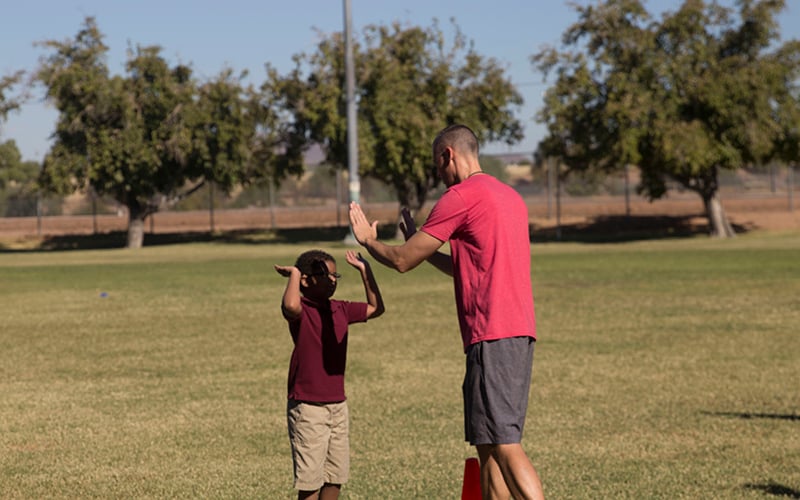 “Teaching is the second career for me, but it’s my first passion,” Josh Meibos told colleagues, family and other educators as he accepted the 2018 Teacher of the Year award. (Photo by Paola Garcia/Cronkite News) 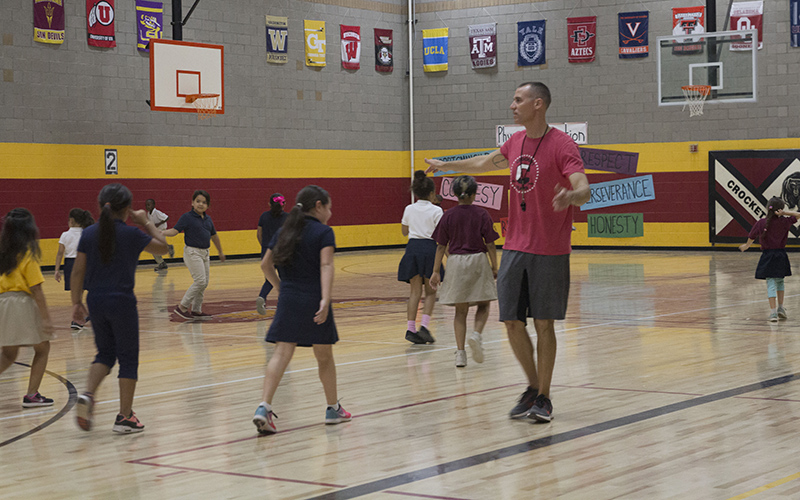 P.E. teacher Josh Meibos, the 2018 Arizona Teacher of the Year, gets his students to warm up by jogging around the gym. (Photo by Paola Garcia/Cronkite News)

“Teaching is the second career for me, but it’s my first passion,” Meibos told colleagues, family and other educators as he accepted the 2018 award earlier this week.

He decided to change his career path at age 30 and applied for a master’s program at Arizona State University. Then, he made plans. He would get his teaching certifications, teach in the U.S. for a few years, then move abroad and continue teaching around the world.

“Little did I know, at my first teaching job at Crockett Elementary,” Meibos said with tears in his eyes, struggling to get the words out, “that the world was going to come to me.”

Meibos said he has taught students from families with refugee status, speaking 20 languages represented. An estimated seven percent of students at the school battle homelessness.

His favorite part of teaching is seeing students grow and improve over the seven years he has worked at the school. He’s amazed the children who were in kindergarten, when he first started, are now in the sixth grade.

He also remembers advice that still serves him well.

“One, calm down. Two, figure it out. Three be nice to yourself. And, four, make stuff happen,” he said.

“I want to make stuff happen for the teaching profession in Arizona. We deserve to be better than last place in this country,” Meibos said.

Meibos’ way of making stuff happen is to help fellow teachers.  He works with organizations  such as Hope Street Group that collaborates with Arizona K12 Center to help teachers build skills.

Donnie Dicus, a director at the Arizona K12 Center and a finalist for last year’s Teacher of the Year award, nominated Meibos.

The Arizona Education Foundation presents the annual award to a teacher who shows “a superior ability to help all students achieve,” has earned the respect of co-workers, students, parents and is a leader in the community. The recognition comes with $15,000 and a meeting with the President at the White House.

“We are so excited and proud of Josh Meibos. He has always put children first and that speaks volume of the appreciation that we have for our physical education teachers,” said Channel Powe, a member of the Balsz School District governing board.

A few days after Meibos was surprised with the award at a luncheon and ceremony, he was back at the Crockett soccer field.

“He’s the best coach I ever had,” Brendon said. Sienna agreed.

“He’s awesome and deserves the award because he’s a great coach,” she said.

Meibos, as a physical education teacher, promotes a healthy lifestyle.

“What we have emphasized over the last few years is healthy eating, active living, which is all about exercise and how you eat and take care of yourself,” district superintendent Jeffrey J. Smith. “Josh has been such a premiere leader in our district in promoting that.”

Smith said he is pleased to see physical education be recognized as important to a good education.

Meibos incorporates subjects like math and English into his P.E. courses. Students might run a mile, be timed, and write reflections about the exercise.