PHOENIX – With every mass shooting – from the 26 people killed and 20 wounded in a Texas church this weekend to the 58 dead and 515 wounded at a Las Vegas concert in October – comes the call for stricter measures to prevent mass shootings and domestic terrorism.

But in states like Arizona, which has some of the least restrictive gun laws in the country, it rarely happens. No permits are required to purchase or own a firearm. Although background checks are required for purchases from federally licensed dealers, nothing is required for person-to-person private sales.

Earlier this year, Republican Gov. Doug Ducey signed Senate Bill 1122, which makes it illegal for anyone to be required to check a database before selling private property – including guns.

“Basically, they said that no city or district can say that you have to take a background check to sell personal property,” said State Rep. Randy Friese, a Democrat from Tucson. “It didn’t anywhere mention guns but it was absolutely about guns. No one checks a list for selling a refrigerator.”

Just last week, the Phoenix City Council heard a petition to ban bump fire stocks, a firearm accessory that can be added to a gun to enable it to operate as an automatic weapon. A bump stock was used by Las Vegas shooter Stephen Paddock.

At least 100 people signed a petition to restrict the sale of bump stocks within the Phoenix city limits to people who have a federal permit to own an automatic weapon, said Rev. Jarrett Maupin, a local Baptist preacher and civil rights organizer who introduced the petition at the last city council meeting.

“It’s not just the stuff in Vegas,” said Maupin, “The bump stocks have been causing a lot of problems and they are tied to a lot of mass shootings, drive-by shootings in the inner city, that sort of thing.”

Though the city council voted 5-2 to deny the petition, Maupin said council members agreed to incorporate the petition into their federal and state lobbying efforts. According to the city council report, federal law prohibits cities from regulating firearms, and an Arizona law prohibits cities from regulating firearm components.

“Generally speaking, it’s a lot easier for most people to own a firearm than most people who don’t own firearms think it is. And the vast majority of them are law abiding,” said Charles Heller of the Arizona Citizens Defense League, an organization that works to strengthen second amendment rights through legislation.

No one knows exactly how many guns are in the U.S., Heller said, adding that requiring background checks on personal transactions turns a constitutionally guaranteed human right into a privilege.

“That’s the ultimate aim,” he said, “To make it impossible for you and I, if you were to like one of these guns, for you to buy one without having to get government permission first.”

A Cronkite News review of data from the National Instant Criminal Background Check System shows that between Nov. 1998, when the system was instituted for firearms purchases from a federally licensed dealer, and last year, more than 111 million background checks were processed by the FBI.

Of those checks, 1.3 million were denied according to the 2016 NICS Operations Report. Reasons for denials can include mental instability, dishonorable discharge from the military, substance abuse issues, or presence of a restraining order or conviction for domestic violence, among other things, according to the report.

Though permits are not required to own or purchase firearms in Arizona, there are some “prohibited possessors,” people who are not legally allowed to have firearms, including anyone who has been convicted of a felony, is on probation, or is in the country illegally.

Those who are not prohibited can carry their firearms as concealed weapons without a permit, with some location exceptions such as airports, schools, or businesses that serve alcohol. The state also passed House Bill 2307 in 2010 that would exempt firearms and accessories from federal regulation or registration as long as they were produced in Arizona.

Friese has introduced several firearm safety bills since he was elected in 2014, including one for comprehensive background checks on all gun sales, legislation he calls “important.” None of them passed. 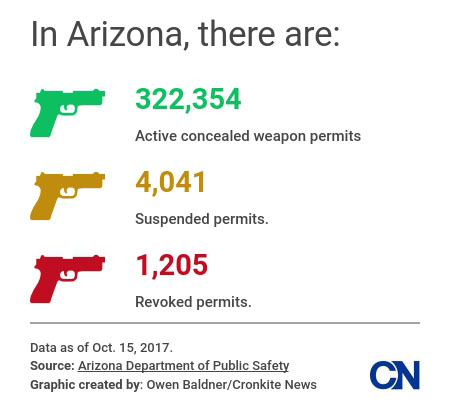 Friese, who also is a trauma surgeon, was on call in 2011 when a gunman opened fire at a shopping center in Tucson, killing six and injuring 13, including Arizona Congresswoman Gabby Giffords. Friese said he supports background checks for private sales.

“If I wanted to just sell my weapon to you, there wouldn’t be a required background check. I could just say give me $900 and I’ll give you my weapon and we’re done,” Friese said.

Last year, State Rep. Paul Boyer, a Phoenix Republican, introduced legislation to prevent the use of smart gun technology in Arizona. Smart gun technology adds additional safety measures that must be met in order for the gun to fire, such as fingerprint recognition or a special ring that needs to be worn by the shooter.

Boyer said he was concerned such technology would prevent guns from working when they were needed most, and also could increase the likelihood for hacking of firearms. He said he would need a compelling argument to support any new gun laws.

“This is a right that existed before government, the right to defend oneself, and it will exist when government is long gone,” Boyer said. “I’m always cautious about what limitations that one would put on that.”

He said requiring background checks for all firearm purchases would only make it more difficult for law abiding citizens to purchase a gun. 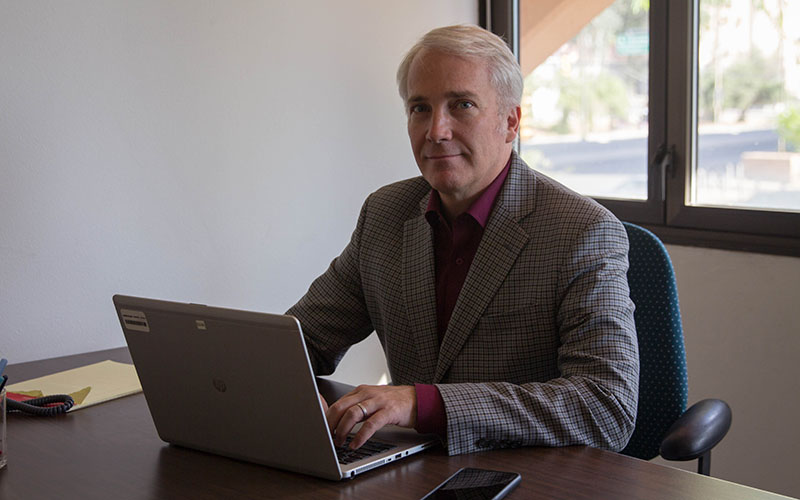 “I think what Dr. Friese is trying to get at is to prevent mass shootings or…some nefarious purpose of that gun being used, but if a perp is going to kill somebody they are going to find a way to get a gun,” Boyer said.

There have been 132 mass shootings in the United States since 1966, according to an ongoing Washington Post investigation. This number includes instances where a shooter killed four or more people, and does not include gang violence, or shootings as a result of other crimes like burglaries. Of the 274 guns used in these 132 shootings, the investigation found that nearly 60 percent were legally obtained.

“I understand for people who aren’t into guns, I understand you folks fear the gun. You think that somehow by limiting me, or people like me, that you’re limiting the danger, well you’re not,” Heller said. “What you have to do is address the act, not the possession.”

“To continue to say the laws we have in place are not doing it, so adding any new ones won’t make a difference, I disagree with that,” he said. “Sitting back and saying ‘we can’t do anything about it,’ it’s simply not acceptable when people are dying.”