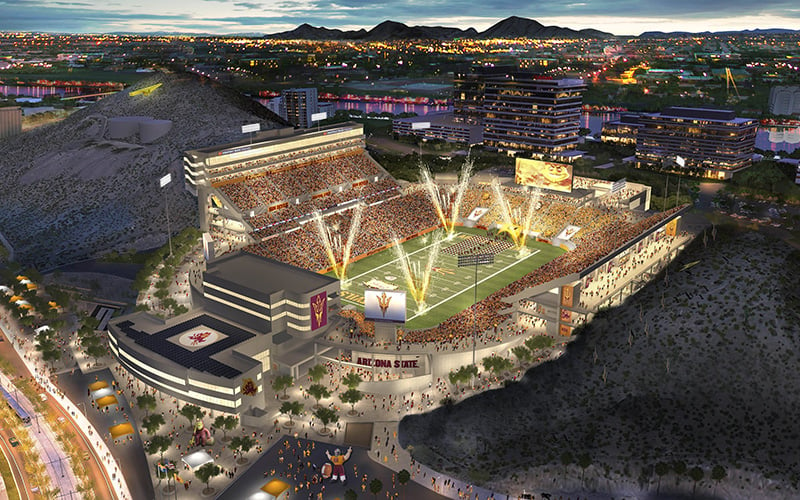 Arizona State officials hope to use Sun Devil Stadium as a year-round facility. They envision college hockey and pro soccer as some of the options. (Rendering courtesy Arizona State)

If ASU administrators have their way, all three will find a home in Sun Devil Stadium soon.

“There’s a reason why we beat MIT and Stanford three years in a row, and it’s going to be four and five,” Colleen Jennings-Roggensack said about ASU’s No. 1 ranking in innovation.

The university has started its final phase of renovating and retrofitting Sun Devil Stadium. The role of Jennings-Roggensack, ASU’s vice president for cultural affairs and executive director of ASU Gammage, will be significant.

She has been tagged to lead Sun Devil Stadium 365, an initiative to help transform the facility for community use year-round. The total cost of the three phases of construction, which will add an indoor fourth level on the east side for functions, is expected to top $300 million.

I think it’s awesome,” ASU football coach Todd Graham said. “I think it’s very innovative. It’s reflective of our university and makes sense. Why have a stadium to use six or seven times a year when you can use it for teaching and education and bring as many people into our venue as we possibly can.”

One idea that intrigues ASU is not usually associated with a football stadium. The university has been in contact with officials at Michigan Stadium and Fenway Park because both have hosted NCAA hockey. ASU is interested in doing the same, and more.

“What if we were able to have games with friendlies, which are like the national teams from around the world, like the Mexican National Soccer Team, to have them come here,” Jennings-Roggensack said.

When football is not in season, the university hopes to grow out the grass and give the stadium the feel of a park. The goal is to host movie nights, when families can bring a blanket and sit on the grass, or where people can come and participate in various athletic activities.

“The field after football grows and becomes more like Central Park, so what if you could come every morning and we have goat yoga out there, and you could do your yoga with your goat,” Jennings-Roggensack said about the increasingly popular activity.

The goal for the stadium project was to go beyond the average university’s use of an athletic facility to maximize investment. The idea was sparked by ASU alumnus Jack Furst, who was named ASU’s 2017 Founder’s Day Philanthropist of the Year.

“Jack raised a lot of the money for the stadium and he said if we are going to do that, are we really going to do it for seven football games a year? And the answer is no,” Jennings-Roggensack said.

Furst strongly believes in ASU’s effort to step up its sustainability game, and its efforts to lead a revolution among the way spaces like a college football stadium are used. The goal is to convert a facility that has a two percent utilization rate into a space with a 98 percent rate.

“It’s natural for ASU to rethink the improbable,” Furst said in a statement. “As leaders in innovation, ASU is always chasing what we have learned from the past to change and impact the future.”

Jennings-Roggensack agreed, saying, “What’s been really great is we’ve actually been able to access the intellectual power of Arizona State University students and the same thing will be true with sustainability as we move on there.”

ASU’s vision for the future has Sun Devil Stadium being the central hub of not only the campus, but of all of Tempe.

“Sun Devil Stadium is an iconic venue in the Valley and through its reinvention can serve a purpose beyond football game days in the fall,” Ray Anderson, vice president for university athletics, said in a statement. “Stadium 365 allows Sun Devil Stadium to become a destination for a multitude of events. This belongs to the public. It is not just Sun Devil Athletics.”

The school has been working with a variety of students, ranging from those in the Herberger Institute for Design to the W.P. Carey School of Business. The design school’s objective is to make the space more efficient for the people using it, and has created booths that can be used at job fairs or festivals. The business school worked in teams to run surveys at other colleges and helped put budgets together.

“If you’ve been in the stadium, you’ve seen we’ve got these large concrete walls. How do we say to the 16 colleges and departments at ASU, ‘You can have that space to talk about the most important thing that’s happening, the latest idea,’ ” Jennings-Roggensack said.

The new hub is also going to house the Pat Tillman Veterans Center, and there are tentative plans to add broadcast studios for the Walter Cronkite School of Journalism and Mass Communication.

Classrooms, meeting halls and a place for the City of Tempe to host events will also be available.

Additionally, the 365 Community Union aspires to be a place for citizens to come eat, learn, connect with others and participate in activities.

“The bottom level will be grab-and-go food. It could also be student-open, student innovation,” Jennings-Roggensack said. “Then the second floor would be like casual dining. So you could go and have a nice meal but it’s not (fancy). Then the third level there will be fine dining. So that the president looking at courting new businesses or faculty coming, or it’s a big function happening.”

The stadium has a sustainability plan set in place, but that plan will be re-evaluated as the project progresses. Any food providers that will occupy a space in Sun Devil Stadium will have to show they are sustainable, and ASU would prefer they use locally sourced food.

“We really do also see this as a recruiting tool,” Jennings-Roggensack said. “President Crow says this will be the university’s largest asset, and you use an asset in as many ways as possible.

“We want it to be the first place that Sun Devils come to the moment they graduate from, and a place where they bring back their grandchildren.”
– Omar Soussi contributed to this report.