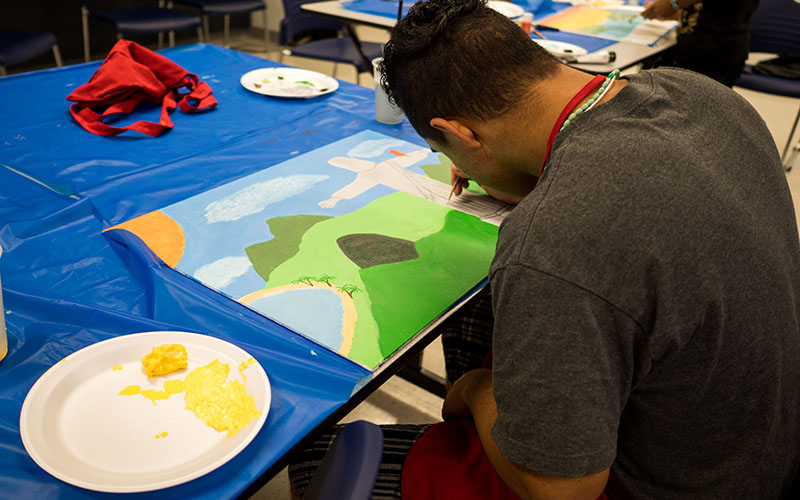 A workshop participant works on a depiction of Christ the Redeemer, an important religious symbol in Brazilian culture. (Photo courtesy of Phoenix Art Museum) 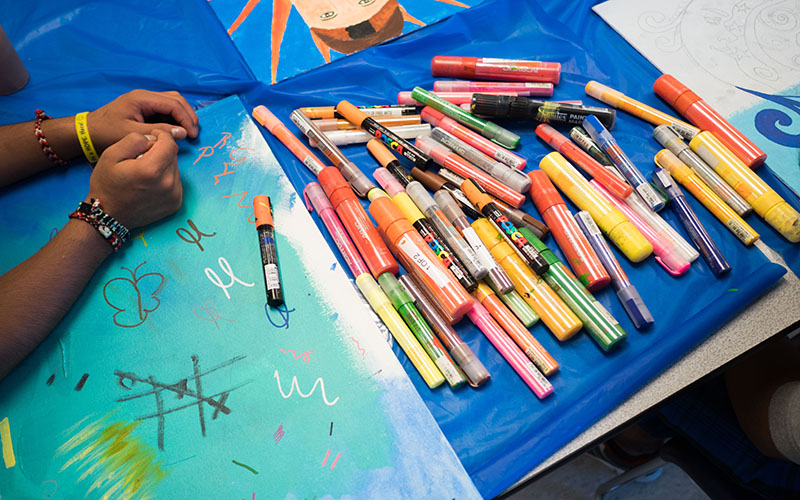 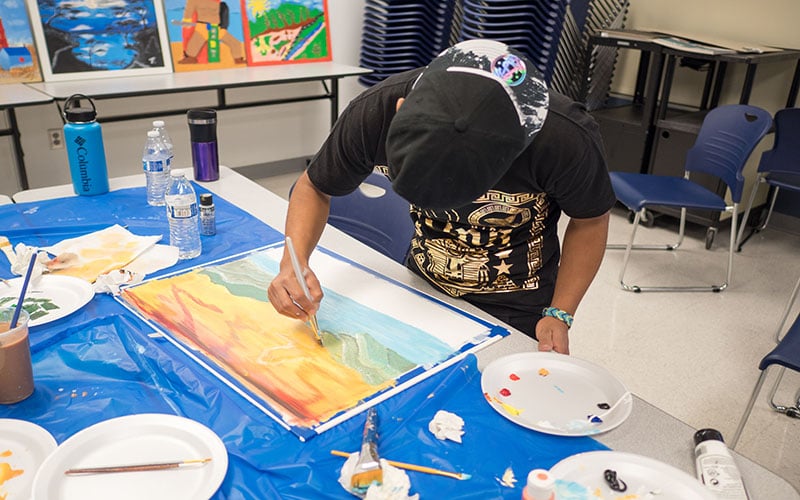 One of the participants of the workshop builds the layers on his painting. (Photo courtesy of Phoenix Art Museum) 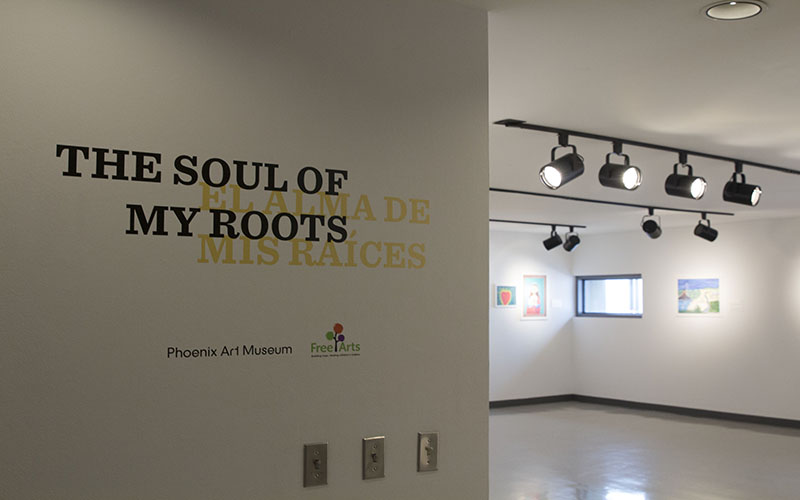 The exhibition is on display at the Wolfswinkel Education Building in downtown Phoenix and is open to the public. (Photo by Lysandra Marquez/Cronkite News). 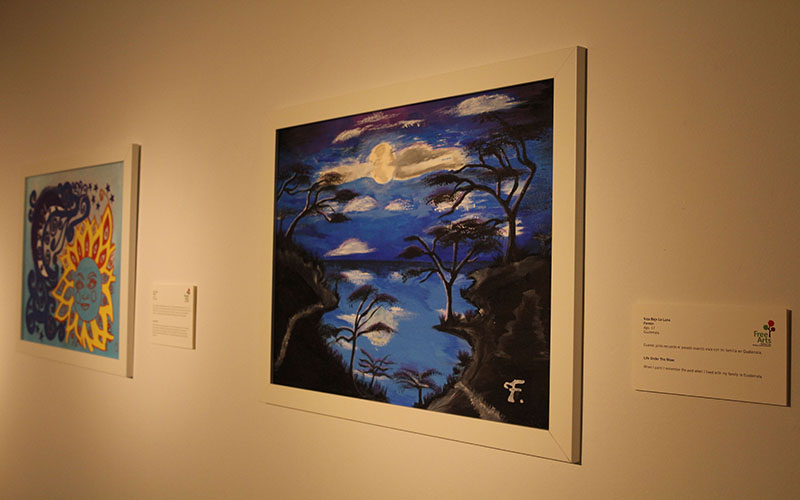 Largo Viaje (A Long Journey) pictured right, and Vida Bajo la Luna (Life Under the Moon) pictured right are both pieces completed by participants during an art workshop for immigrant youth. (Photo by Lysandra Marquez/Cronkite News)

Over the past summer, these young men participated in a workshop which gave them an outlet to express themselves, their journeys, and their artistic ability.

These aren’t everyday 17-year-olds, though. They’re currently living in a Valley shelter along with many other young immigrants who came alone to the United States in hopes of building a better future for themselves.

The workshop is a collaboration between Free Arts for Abused Children of Arizona, local artist Emily Costello, and the Phoenix Art Museum, which aims to involve parts of the community who may have not had access to a museum before.

“This collaboration exemplifies the level of accessibility that the Museum aims for, allowing us to open our doors to those in our community who otherwise would not have had this opportunity,” said Amada Cruz, CEO and Sybil Harrington director of Phoenix Art Museum.

The young men met for seven weeks throughout the past summer. While there, they were encouraged to draw inspirations from another exhibit, ‘Border Crossings: Mexico and the American Southwest.’

As weeks went by, they started to work on their own art.

Erina Meneses, representative for Free Arts, said she wasn’t sure if the group would take to the workshop, but as time went by, she saw how the young men started to open up.

“These young men were very reserved with their emotions,” she said.

“Like all the children we serve, they have experienced trauma, and this group also has a language barrier and comes from a cultural environment where stoicism is how men are taught to show pride, respect, and gratitude,” she added.

“Their artwork was our only guide to how they were feeling. From the colors and vivid images we saw them bringing to life on paper, we could see that they were enjoying themselves,” added Meneses.

The young men who participated in the workshop make up a small percentage of the hundreds of thousands of minors who embark on a treacherous journey alone from countries including Honduras, Guatemala, El Salvador and even as far as Brazil.

According to statistics from the U.S. Customs and Border Protection, during the 2015 fiscal year more than 10,000 unaccompanied minors were apprehended at the southwest border, with the number doubling for 2016.

In that same year, the number of unaccompanied minors apprehended in Arizona was nearly 4,000.

The fate for many of the minors apprehended at the borders becomes complicated, and ultimately rests in the hand of a juvenile federal court judge. While they await trial, they often live in immigrant shelters like Southwest Key, which has a Phoenix location.

The potential outcomes for young immigrants like these vary, but some available forms of relief include special juvenile immigrant status, being released to care of a sponsor within the community and asylum, according to the Latino Policy Forum. Limitations for those seeking asylum have increased drastically since the Department of Homeland Security terminated the Central American Minors Program earlier this year, a special program specifically for immigrant youth from Central American countries.

Housed within the Wolfswinkel Education Center, which is part of the Phoenix Art Museum, ten paintings currently hang on the walls as part of an exhibit titled, “El Alma de Mis Raices,” Spanish for “The Soul of My Roots.” All the pieces were done by these young immigrants and will be open to the public until Nov. 14.

For many of the young men, it was the first time they had set foot in a museum.

Because of their immigration status, they cannot be identified by name, but the Phoenix Art Museum published some observations and thoughts they shared with museum staff.

“It feels good to see history across the walls.”

“The culture of every country is important. It’s important to share them.”

“I’m grateful that there are people who have opened their doors to us here. With painting, I’ve learned to relax.”

Jessica Flores, program director with Free Arts, says this is the third year they do this and she’s already working with the museum for an upcoming workshop with a different group of participants.

Flores also shared her perspective on seeing the young men go from shy and quiet, to being able to speak up about their art in front of a crowd of people.

“The boy that gave the speech at the final exhibit was one of the most reluctant and shy on that very first day of class,” Flores said.

“A lot of these kids ended up creating pieces about the places they came from, the journey that they took to get here, and the things that they had to overcome in their lives to be able to be here with the hope of starting over and having a better future,” she said.

“All of those things were incredibly moving.”

One of the participants, identified as Eduardo, addressed the audience present during the opening night of the exhibit back in August and shared his personal experience.

“These paintings were made with a lot of effort and when we were painting we thought about our countries, our families and moments in our lives.”