These stop arm cameras are becoming increasingly popular, with districts across the country adding them to their buses.

“What we’re finding is that more and more people are running through and not observing the stop arms when they actually deploy,” said James West, transportation director for the district. “We’ve got just an incredible amount of safety factors and issues that happen through that.”

From 2006 to 2015, 102 school-age pedestrians died in school transportation-related crashes – with 36 percent struck by vehicles such as passenger cars, trucks and vans, according to the U.S. Department of Transportation.

School officials hope the cameras – attached to the front, back and sides of the buses near the stop arms – will improve safety for the students.

“Once the stop arm is activated, it comes out, the stop arm cameras detect any motion that happens between the front of the bus and the back of the bus,” West said.

He said the cameras take still photos and video of the license plates and vehicle.

However, only 15 states can actually use the camera footage to prosecute violators, according to the National Conference of State Legislatures. Arizona is not one of them.

West said he hopes to use this footage as a way to raise awareness.

“We would be able to track where our hotspots are so maybe if we have to reroute a bus, maybe it’s too dangerous in this one area with too many incidents, then we can do that,” West said. 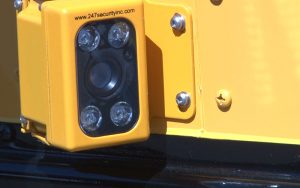 He also said the district would use the data to request law enforcement patrol the area during pickup and drop off times.

Regardless which way you’re traveling, drivers in Arizona must stop for a school bus if the bus is picking up and dropping off passengers, according to the National Association of State Directors of Pupil Transportation Services.

Drivers must remain stopped until the bus begins to move ahead or the driver turns off the stop-sign arm and flashing lights.

Vehicles do not have to stop if driving the opposite direction on a divided roadway, which must have a physical barrier such as a fence, curb or separation of the payment. Roadway striping isn’t considered a physical separation.

Without the cameras, bus drivers would have to write down the driver’s license, which could distract them, West said.

“It’s just too much going on,” he said. “We want them to focus on releasing the students, how they exit and go home on their different paths, without having to deal with all that other issue of writing down a license plate and trying to collect that information.”

Carol Puentes said her grandkids get dropped off on McDowell Road, a busy street in Tolleson.

“It’s good to have cameras on there also because sometimes there’s cars on there that don’t pay attention,” Puentes said. “That’s going to help them see better that there’s cars that are not following the rules, so it’s safety for our children when they get off the bus.”

Ultimately, West said he hopes this awareness will push the state to look into this issue. 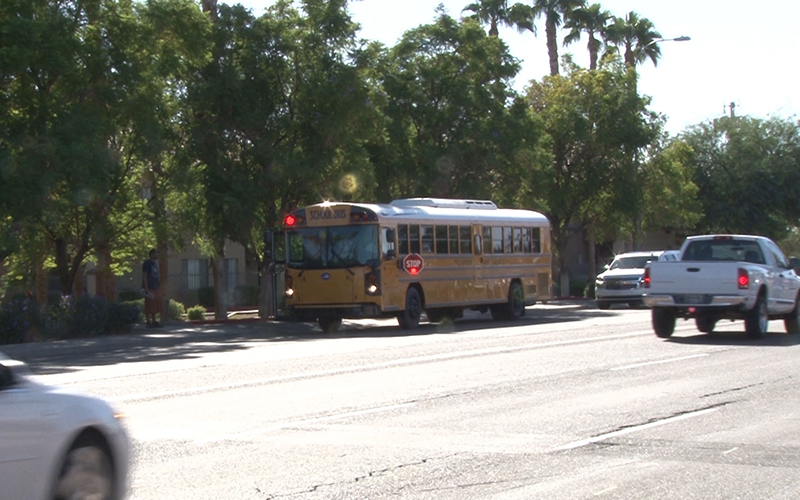 Regardless which way you’re traveling, drivers in Arizona must stop for a school bus if the bus has its stop sign out. (Photo by Blakely McHugh/ Cronkite News)