Cordoba said Puerto Rico has a special place in her heart, and she had actually been considering relocating her family to the island just a week before Maria hit. 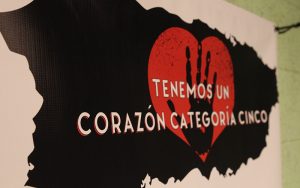 A banner for the open mic which reads, “We have a category 5 heart.” (Photo by Lysandra Marquez/Cronkite News)

Instead, she is now helping her husband, Jon Cordoba, continue needed relief efforts from Arizona.

“Things really aren’t getting better. There’s still people, especially on the inside of the island, that are still without any food, still without water and they’re still without power,” she said. “I mean, we’re talking about not having toilets that flush and not having trash services. Trash is building up on the streets.”

Fundraising organizations like AZ4PR, which Cordoba’s husband leads, along with ArribaPR, and activism group Phoenix 50 co-hosted ‘Stories of Puerto Rico’, a special open mic night to fundraise for Puerto Ricans in need. 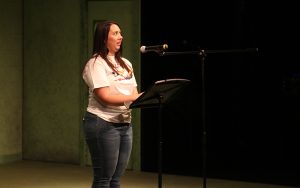 Ken Weene, who hosts the monthly open mic night at the Kax Stage of the Herberger Theater Center in downtown Phoenix, shared he had no hesitation in incorporating the fundraising aspect to the event. It was the first time they opened the floor to a particular cause.

“There’s one thing we’re all here for, hopefully, which is to get some money together to help those in need in Puerto Rico,” Weene said.

Seeing how the U.S. government reacted toward Hurricane Irma versus how it reacted to Hurricane Maria, the situation has been a “tough pill to swallow,” Cordoba said.

“I just know that there would be no state in the main continental United States that would be without power and water for 30 days. It just wouldn’t happen. Why is it happening to a territory of the United States that we’re supposed to support and take care of and represent?” she said.

“Puerto Rico survived the Hurricanes, now a financial crisis looms largely of their own making.” says Sharyl Attkisson. A total lack of…..

…accountability say the Governor. Electric and all infrastructure was disaster before hurricanes. Congress to decide how much to spend….

…We cannot keep FEMA, the Military & the First Responders, who have been amazing (under the most difficult circumstances) in P.R. forever!

@POTUS It is not that you do not get it; you are incapable of fulfilling the moral imperative to help the people of PR. Shame on you.!

Back in Phoenix, performances during the open mic event ranged widely from poetry to anecdotes, and even included a unique performance from blind musician, Esoteric Quality.

Esoteric Quality dedicated his song, “The Struggles of a Blind Man” to all the blind people of Puerto Rico, and spoke about the disadvantages and difficulties the blind population of the United States face every day. 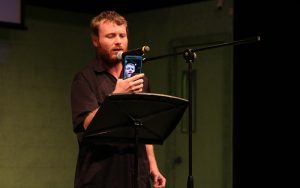 Musician, Esoteric Quality, performs “The struggles of a Blind Man” for the audience at the “Stories of Puerto Rico” open mic night at the Kax Stage in downtown Phoenix. (Photo by Lysandra Marquez/Cronkite News)

Halfway through the event, the lights were dimmed so the audience could watch a video with first-hand accounts of Puerto Ricans who are currently still on the island. They described the increasing difficulties they are facing, like limited access to electricity, food and clean drinking water.

Toward the end of the night Jessica Gonzalez, who leads ArribaPR, performed a poem written by her mother about what it means to be “Boricua,” a term Puerto Ricans use often identify themselves.

Those who attended the open mic were also able to purchase raffle tickets for a variety of items and prizes, with the proceeds of the night going towards financing the transportation of supplies being sent from the U.S. to Puerto Rico.

AZ4PR and ArribaPR also announced the grand opening of a donation center along 16th Street in central Phoenix scheduled for Nov. 3, where they will be accepting community contributions which will be transported to Florida before heading to Puerto Rico.

While open mic events often serve as creative outlets for people to share their poetry, songs and stories, Gonzalez made it clear to the audience the night was also about connecting communities.

“Elevate our culture, celebrate our people and recognize that we are here to rebuild, we are not leaving, we work really hard and we love everything about the United States,” she said.

“We are here with you and we want to embrace you in our family.” 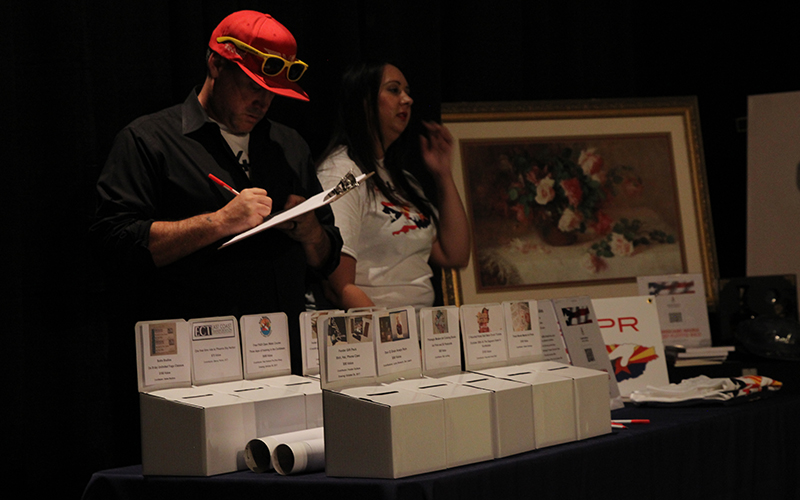 Jon Cordoba (left) of AZ4PR along with Jessica Gonzalez (right) of ArribaPR, manage the different prizes and items being raffled during the open mic. (Photo by Lysandra Marquez/Cronkite News)