Victor Contreras, director of workforce solutions for Chicanos Por La Causa, helps a job seeker fill out an application at a job fair in Maryvale. (Photo by Kara Carlson/Cronkite News)

On Tuesday afternoon, she cruised from booth to booth, speaking with potential employers as part of a hiring event at the Legends Event Center in the west Phoenix neighborhood.

It was her second time at the center that day.

“I loved it so much, I came back with my daughter,” she said, gesturing to her 25-year-old daughter, Jacklyn Gonzalez, who also is seeking a job.

Ybarra said she appreciated how she could visit many companies at once. Hundreds of people attended the fair, where 25 employers, primarily in retail, interviewed applicants throughout the day. 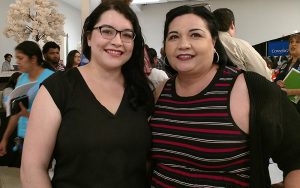 Jacklyn Gonzalez and Lupe Ybarra joined hundreds of job seekers in Maryvale on Tuesday at a job fair organized by the Maryvale+ Workforce Initiative. (Photo by Kara Carlson/Cronkite News)

Organizers had hoped to connect about 300 to 400 people with jobs at the event. It’s part of a larger push by the Maryvale+ Workforce Initiative, a coalition of local, state and national partners to improve employment in the Maryvale area, which has nearly 400,000 residents.

Currently, more Maryvale residents work outside the neighborhood’s borders than in it. The area has developed a reputation: low income, crime ridden, run down.

Victor Contreras, director of workforce solutions for Chicanos Por La Causa Inc., a nonprofit involved in the initiative, said Maryvale residents have been “failed by many institutions supposed to help them.”

He said the initiative, which plans to host quarterly events, may help fill gaps in education and workforce development the area faces.

It also could help drive economic growth in the area, he said.

At Tuesday’s fair, attendees mixed with employers such as Starbucks, Walmart and Banner Health and filled out job applications there.

The program is especially focused on youth outreach. Contreras said about half of the attendees Tuesday were between the ages of 16 and 24.

Maurice Price, 20, attended the fair in hopes of gaining a job with CenturyLink. He said he liked the accessibility of employers.

“There’s a lot of people that might be facing hardships and really need a job, and it’s a lot easier to be able to apply to a bunch of places,” he said.

Aaron Stamper, 19, attended because he heard companies he was interested in – such as Walmart, Sam’s Club and Sketchers – would be at the event.

“I’m pretty good at lifting and heard that Walmart was going to be here,” he said.

He said he has a baby on the way and needs a job. He works with the Arizona Humane Society, but he said he wants a job he can stick with long-term.

Contreras said beyond job placement, the initiative has focused on improving educational opportunities for residents because Maryvale lacks those resources now. He said there’s no community college within eight miles of the event center.

At the Starbucks booth, many people expressed interest in the company’s College Achievement Plan, which allows employees to attend college online through Arizona State University for free. 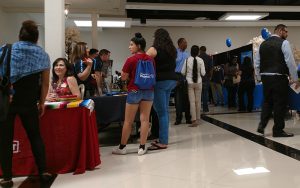 Organizers had hoped to connect about 300 to 400 people with jobs at a job fair held in Phoenix. It’s part of a larger push by the Maryvale+ Workforce Initiative, a coalition of local, state and national partners to improvement employment in the Maryvale area. (Photo by Kara Carlson/Cronkite News)

“Our goal is to provide an opportunity for education” for both people moving up the ladder within the company and those just starting out who plan to take their skills elsewhere, said Jayson Edwards, a district manager for Starbucks.

Training to You, or TTY Career College, was another popular booth. The college offers shorter programs and certificates in information technology and project management in four to eight weeks.

Representative Hillary Fuller said she spoke to a range of people, from IT professionals who want certification to young people just out of high school. She said her organization wants to show people there are other educational opportunities beyond traditional two-year and four-year colleges.

“There’s a lot of opportunities to really connect with the community and be more than just a face,” said Laura Cooper, a recruiter for Banner Health.

The event also connected people to services, such as Dress for Success Phoenix, a nonprofit that provides clothing and training – such as resume workshops – to women.

Some of the initiative’s other goals include establishing a workforce campus in Maryvale, providing a meeting space for providers, hosting workshops for skills such as interviewing and resume writing, offering GED and adult basic education services and facilitating college courses with Maricopa County Community College District.

The partners also include the Office of Economic Opportunity, Goodwill of Northern and Central Arizona, Center for the Future of Arizona, Arizona @ Work: Maricopa County, and Arizona @ Work: City of Phoenix.