“We sent out about 55 engines and 150 firefighters between yesterday and first thing this morning,” Tiffany Davila said, spokeswoman for the Arizona Department of Forestry and Fire Management said earlier this week.

Davila said the department regularly sends help to battle wildfires but California’s request was unusually high. California asked for 100 engines and 300 to 400 personnel from Arizona and other firefighting groups in the West. 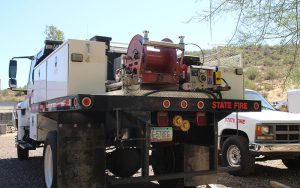 The wildfires that began Sunday night have been described as among the deadliest in history, injuring and killing residents, and destroying thousands of homes and businesses.

When the Arizona fire crews arrives in California, they are briefed and given constant updates daily on the conditions and different assignments that day. The crew is expected to be in California for 14 days.

“We’re doing everything in our power we can to fulfill everything they are asking for,” Davila said.

California requested strike teams to protect structures, patrol neighborhoods and plan in case fire heads their way. But their duties will also depend on what is necessary, she said.

The firefighters take their own water, personal protection, food, and anything else that they’ll need on the road and at camp.

Davila said fighting wildfires takes cooperation of agencies from around the region. The Arizona forestry service sent help this summer to western states and receives crews in return to help fight Arizona wildfires. 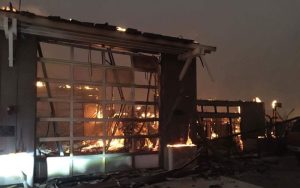 “Every season we get firefighters from California, Montana, Oregon, across the country that come here to Arizona to help support us during our fire season,” Davila said. “When it’s their turn we’ll go help them and do the same for our neighbors.”

The request process varies by state. Usually, the Department of Emergency and Military Affairs handles requests, but this one went to the Forestry Service.

“We need to make sure our crews, equipment and engines are accounted for as well,” Davila said.