The 1.5 million-acre Bears Ears National Monument in southern Utah was designated by President Barack Obama in December. But it’s one of the monuments targeted for “right-sizing” by the Trump administration, which has criticized use of the Antiquities Act to declare monuments. (Photo by Josh Ewing/Bears Ears Coalition) 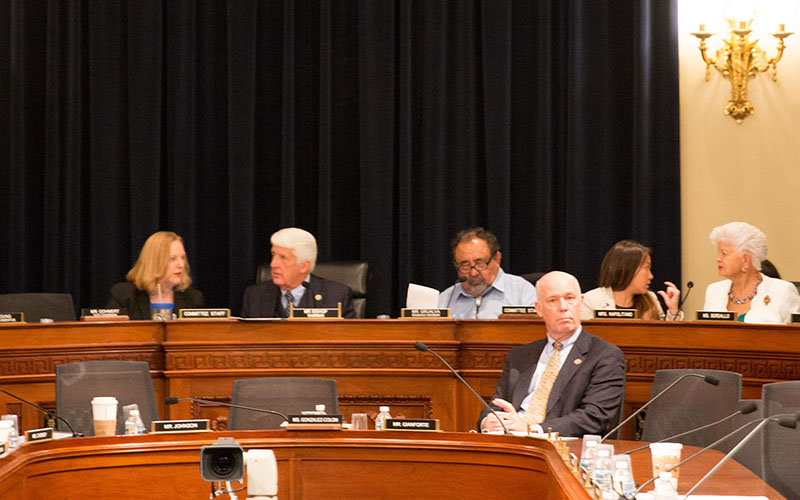 Rep. Rob Bishop, R-Utah, center, was the main sponsor of a bill to severely restrict the Antiquities Act, while Rep. Raul Grijalva, D-Tucson, next to Bishop, led an unsuccessful fight to get the administration to turn over documents relating to its review of the act. (Photo by Isaac Windes/Cronkite News)

WASHINGTON – A House committee gave preliminary approval Wednesday to a Republican bill that would sharply curtail the Antiquities Act, which allows presidents to order the creation of national monuments.

The House Natural Resources Committee also rejected, by the same party-line vote, a Democratic measure demanding that the Trump administration turn over documents in its review of the law that could lead to downsizing of some recently designated monuments.

At issue is a century-old law that lets presidents declare national monuments to protect natural, historic and cultural sites – an act supporters say has protected areas like the Grand Canyon, but critics say has been abused by recent presidents to grab land without public input.

The bill that advanced Wednesday on a 23-17 vote would severely curtail the act, limiting the amount of land a president could designate, requiring public input into the process and setting a one-year limit on any emergency designation that is needed to head off “imminent and irreparable harm” to a site.

Rep. Paul Gosar, R-Prescott, said before the meeting that the act was originally intended to affect “the smallest amount of land possible,” but has been used to protect millions of acres by recent presidents – including about 500 million acres by President Barack Obama alone.

Gosar said the bill, of which he is co-sponsor, would require more public input earlier on in the process, making sure that “the people who are hurt and the people who are helped most are sitting at the table” when a monument designation is made.

The bill also specifies that the president can reduce the size of previously designated monuments. That is something that Interior Secretary Ryan Zinke has recommended after President Donald Trump ordered a review earlier this year of monuments designated since 1996, and something Democrats have argued the president cannot do.

Rep. Raul Grijalva, D-Tucson, said the bill “proves what we’ve been saying all along, Trump doesn’t have the authority to eliminate Utah’s Bears Ears or Grand Staircase-Escalante, Oregon’s Cascade-Siskiyou or any other national monument.”

Those were among the monuments that Zinke reportedly said should be considered for “downsizing” in his report to the White House after a four-month review. But those names came from media reports of leaked documents – neither the White House nor Interior has released copies of the full recommendation.

Grijalva said lawmakers’ attempts to get information on the review were dismissed, and Democrats “will not let our national monuments and sacred sites be turned over to the oil and gas industry without a fight.”

Democrats unsuccessfully pushed a resolution to make Interior provide copies of every “document, map, survey, report, record, memorandum, call log, correspondence, and other communications that refers or relates to the executive order on the review of designations.” Their resolution went so far as to ask for expense reports and detail on meetings with members of tribe and LGBTQ communities. It failed by the same 23-17 vote by which the GOP bill passed.

Where Democrats said the White House review was meant to benefit mining and drilling interests, Republicans like California Rep. Tom McClintock accused the Obama administration of having an “incestuous relationship” with “radical environmental groups.”

That was echoed by Rep. Doug LaMalfa, R-California, who said the Antiquities Act has been used “intentionally … to curtail legitimate recreational, sport and economic activities without the input of residents.” He downplayed Democratic claims that the bill would be a giveaway to special interests.

“You hear the scare stories about drilling and development, but what really is the fact here is that these all require permits,” before any development can begin, LaMalfa said.

But Rep. Ruben Gallego, D-Phoenix, said that virtually every well-known national monument would have been stopped by the proposed legislation.

“When you get down to it, almost every single monument recognized over the last century would have been prohibited under this bill,” Gallego said.

That claim was dismissed by Rep. Rob Bishop, R-Utah, the main sponsor of the bill.

“The idea that Grand Canyon or Zion would not be created without this is misinformation,” said Bishop, who is also chairman of the committee. “Those are national parks, which can only be designated by Congress.”