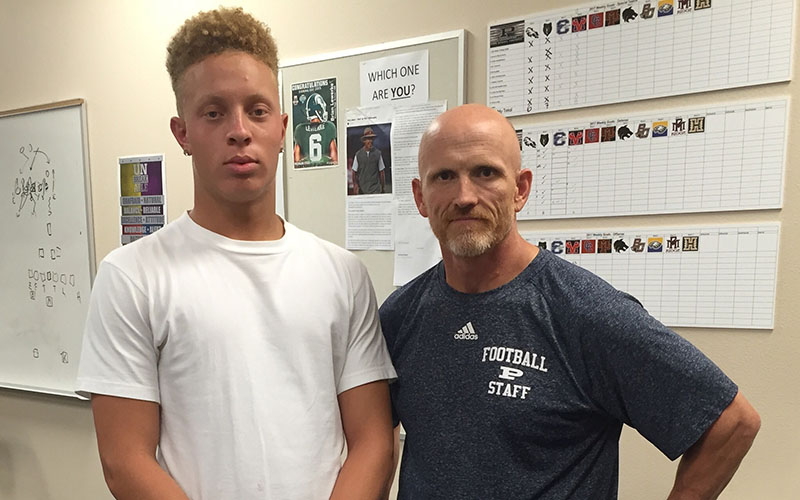 PHOENIX — He is a “Game of Thrones” fan, likes action and comedy movies and is the No. 1 ranked football recruit in Arizona for the class of 2019.

He is pro-steak and anti-sushi. He likes Tupac and Michael Jackson and already has committed to playing at Oklahoma.

“He” is Spencer Rattler, the No. 1 ranked ESPN 300 quarterback for the 2019 class. Yet for all the attention, coaches say he remains well-grounded.

“At Pinnacle, they don’t really have all the top-talent kids, so I still hang out with kids I grew up with since like second grade,” Rattler said. “They humble me. And my parents have taught me to stay humble and keep working.”

One top talent that does attend Pinnacle is Nico Mannion, a sophomore point guard and one of the top recruits in his class. He is also one of Rattler’s basketball teammates.

The two have a friendly rivalry and are always trying to one-up each other. They say it’s all in good fun. They grew up together since they were in seventh and eighth grades and consider themselves brothers.

“We kind of compare the (scholarship) offers and see who has better ones, but it’s never hateful or jealousy, it’s just always love,” Mannion said. “It’s cool because we’re so similar but so different. They’re different sports, but the similar attention and offers and stuff like that, so we kind of mesh well together, I guess. We understand each other and what we go through.”

Rattler has experienced many memorable moments, whether it was going to Florida to play for a national championship when he was in eighth grade or competing against Chandler Basha on ESPN.

Rattler can add committing to the University of Oklahoma to that list.

“When I visited Oklahoma, I just had a good feeling about it,” he said. “Lincoln Riley, the head coach, I’ve known him since freshman year. He offered me (a scholarship) when I was 14. We had a good relationship. The way he calls his offense is just perfect for me, so I just clicked with him and all the other coaches when I got there. (We) just had a good vibe.”

Pinnacle sits at 4-3, and this year marks the third one Rattler is leading the Pioneers. The school first opened in 2000 and has never made it past the state quarterfinals. Rattler said he knows there is a lot of pressure for him to lead Pinnacle to a state championship, but he does not let it phase him.

“There’s a ton of pressure at the quarterback position overall,” he said, adding he is just focused on leading his team to victory each week.

Several people have played a big role in his life, but his father has been his biggest influence growing up, he said.

“Just seeing how hard he works and how he supports our family and this and that, so he’s my main reason I strive hard,” Rattler said. “My goal is to retire him one day.”

His football coach, Dana Zupke, and basketball coach, Charlie Wilde, said it did not take them long to realize just how talented an athlete Rattler is.

“Since he was about 6 or 7 years old,” Zupke said. “I’ve known him for a long time. I remember being at a youth basketball game and there was this blond-headed kid out there running circles around everybody.”

“He’s been in camp since he was in second or third grade in basketball, and you knew back then that he just had something that other kids didn’t have, even at his age level or older,” Wilde said. “So you knew he was going to be special. You just didn’t know where it was going to be, and we’re finding out it’s everywhere. Basketball, football and even as a person, he does a lot of good things.”

Wilde shared a story about Rattler coming back from an ankle injury he sustained last year during the basketball season. A senior was starting in place of Rattler during his injury, and once Rattler returned and was ready to start, he let that senior start for Senior Night. Wilde said Rattler even came to him before he could reach out and said, “Coach, you make sure he starts.”

“It’s not just about his points or how many touchdowns,” Wilde said. “He recognizes his teammates and everybody around him, so he’s just a quality person.”

Rattler is also funny, at least according to Mannion and football teammate Hayden Hatten.

Rattler knows to be respectful to his elders, Hatten said, but when he is around his friends, he likes to joke around.

“Spencer is very goofy,” Mannion said. “Off the court, he’s a clown. He doesn’t really care what people think of him, so he’ll do pretty much anything.”

Rattler’s coaches speak highly of him, and for several reasons. He is coachable, cooperative and mature, they say.

“It’s amazing,” Wilde said. “He’s so well-grounded. He’s a pleaser. … He’s not fighting you at all, he doesn’t have an attitude. He constantly wants to try to do the right thing and be a good teammate, so it’s a pleasure to coach him.”

“I don’t know if people realize how coachable he is,” Zupke said. “I think sometimes his persona, because he does have a lot of moxie (and) he’s very confident, I think people may think that (he is not coachable), and he can be willful, but I’ve just been blown away at his ability to be coached. And I think that a lot of people wouldn’t think he is.”

Rattler said he models his style of play after Green Bay’s Aaron Rodgers, Seattle’s Russell Wilson and Carolina’s Cam Newton. He also looks up to those athletes, along with the NBA’s LeBron James.

He also has strong opinions on food.

If he could meet any celebrity, dead or alive, two people come to mind.

“I’d say Michael Jackson or Tupac,” Rattler said. “Those are my two. They’re so famous, and watching their documentaries, I loved both of them growing up.”

Rattler’s teammates and coaches used different words to describe the quarterback. Among them are “special,” “remarkable,” “emotional” and “hungry.”

They say he is a great athlete.

And even better person.