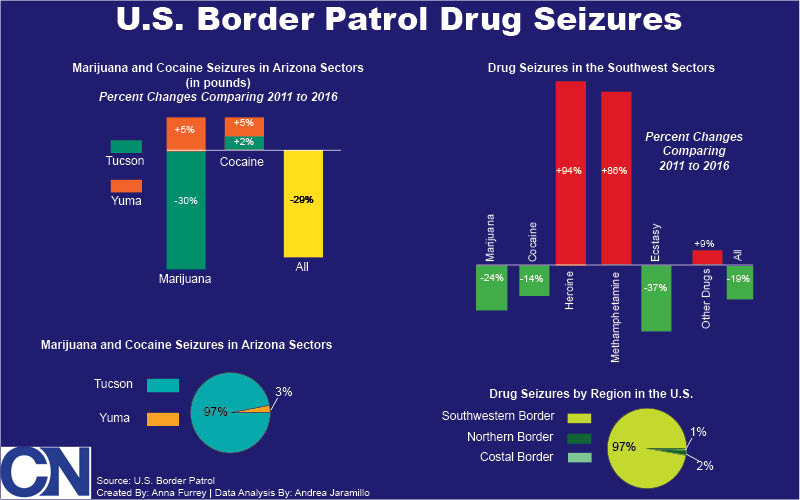 PHOENIX – Leaving behind violence and poverty, a Central American family travels thousands of miles by foot, train, and bus. Once they finally arrive at the U.S. border, they have one more difficult decision to make: carry a bag full of marijuana and cross the desert with some help, or risk their life and cross alone.

That’s the picture that Arizona State University’s geographer Scott Warren painted when he described the reality of drug smuggling across the small border town of Ajo, Arizona, where he lives.

“What isn’t understood about that is there are a lot of refugees (crossing the border), mostly from Honduras. They have no money, they’re fleeing violence and they’re desperate to get into the U.S.,” Warren said. “Those people often times have no other option and they carry 40 or 50 pounds of marijuana to cross the desert.”

Two of President Donald Trump’s main platforms during his campaign were immigration and border security, which would materialize with a promised border wall.

“Build that wall!” supporters chanted fervently at his rallies. On Tuesday, U.S. Customs and Border Protection announced the construction of eight border wall prototypes has started.

According to Trump, the main reason for building a wall along the U.S.-Mexico border is drugs.

“That wall is also going to help us, very importantly, with the drug problem, and the massive amounts of drugs that are pouring across the southern border,” Trump said during his rally in Phoenix last month.

But Warren said the issue is much more complex.

“By no means are these drug smugglers like you would imagine in movies or anything like that,” Warren said. “These are refugees who are arriving at the border and they face a really tough decision and often times that decision they make, is the only way they can cross, carrying that backpack.”

According to CBP data, while heroin and methamphetamine seizures in the Southwest border sector nearly doubled between 2012 and 2016, overall drug seizures between that same time period decreased 19 percent.

During a lecture in Phoenix called “Social & Environmental Costs of the Border Wall,” Warren said he’s seen his small town of Ajo, with a population of less than 4,000 go from 10 border patrol agents in the early 1990s to nearly 500 today. He said he also saw a dramatic increase in the deaths of people crossing the desert through the Ajo corridor.

He knows that for a fact, he said, because he’s personally rescued some of those trying to cross through.

Warren works for an organization that provides humanitarian aid to migrants who cross the Sonoran desert. They leave water and food throughout the frequent routes that migrants use. Sometimes, he said, they get a call that someone needs to be rescued in the desert.

They gear up, drive a few miles to the border, and start looking. Oftentimes, while they walk through the rugged trails, they find other bodies, he said. They register the information for their migrant death map.

According to their system, 227 deaths have been registered for the Ajo corridor from 2001 to 2016.

With an increased presence of border security in certain “safer” areas, Warren said migrants then started to cross through more risky areas.

Undocumented border crossings didn’t stop with at walls or fences, they just shifted to the more rugged, rural areas, he said.

2017 was a particularly difficult year for migrant deaths, according to a United Nations report.

The study found that while detentions across the border decreased, migrant deaths in the desert increased 17 percent compared to 2016. Of the 232 deaths recorded this year, 96 have been registered in Pima County.

Warren said he doesn’t think the border wall will fix the problems Trump says it will. In his words, the wall is just a bargaining chip for political support.

“It would basically be just this massive project for no real apparent reasons other than political expediency and this whole political performance,” he said.