Construction in central Phoenix started in early September and will extend into the fall of 2018. 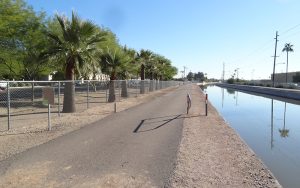 The first phase of construction to upgrade the Grand Canal started in September. (Photo courtesy of city of Phoenix)

The Grand Canal cuts through the center of Phoenix, stretching from Glendale to Tempe.

Monica Hernandez, a Phoenix spokeswoman, said the first-phase of construction is from 15th Avenue to 16th Street and 36th Street to 40th Street.

Phoenix resident Lindsey Bair, who has used the canal near 7th Street for eight years, said runners and other exercisers use the canals now, but she understands the updates will make it more attractive to pedestrians and other users.

“Especially on a Sunday morning I’ll pass like six or seven people just running,” Bair said. But she’s excited to see landscaping and other changes.

Advocates said the changes will turn the canals into an asset.

“We have built our back to the canals,” said Diane Brossart, president and chief executive of Arizona Forward, an advocacy group that melds the environment with quality of life. “We have faced them away from the canals and treated them like alleyways. There was graffiti and it just wasn’t considered beautiful. So this whole movement of canalscape embraces the canals as place makers for connections, recreation and all those good things.”