Phoenix Metro Tech High School student Axel Vargas said he got involved with the “Clean Buses for Healthy Ninos” campaign to help friends suffering from asthma. With him is Dr. Sacoby Wilson, right, who specializes in environmental health. (Photo by Andrew Nicla/Cronkite News) 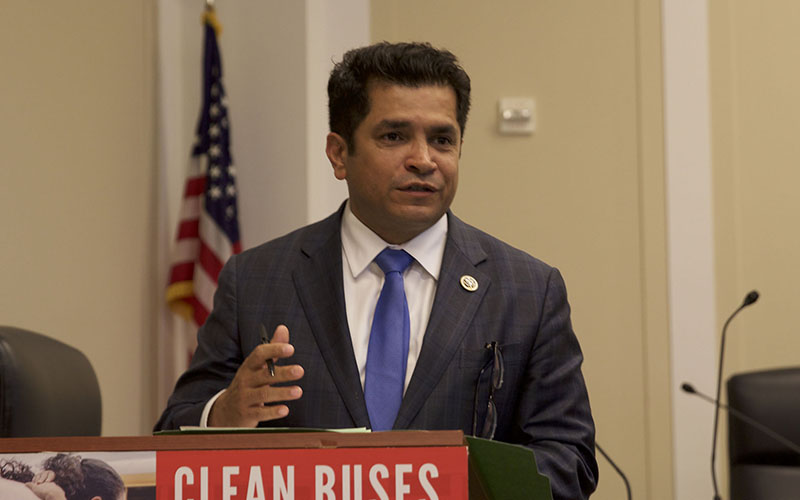 Rep. Jimmy Gomez, D-California, said that more than 3.6 million Latinos suffer from asthma –
and one in 10 kids – the numbers demonstrate the “need for a common-sense plan to reduce air pollution,” like use of electric vehicles. (Photo by Andrew Nicla/Cronkite News)

WASHINGTON – Metro Tech High School senior Axel Vargas doesn’t dislike all school buses – just the diesel ones whose emissions he says are hurting the air quality and affecting the health of him and his classmates.

That’s why Vargas joined a group of doctors, teachers, parents and students from around the country on Capitol Hill Thursday to urge states to replace diesel buses with electric, using funds states will get under the Volkswagen diesel settlement.

The $14.73 billion settlement is to be used for clean-air projects, but Arizona officials have not said what they plan to do with the $57 million the state is slated to get. To Vargas, the answer is obvious.

“I have experienced my friend having an asthma attack in class and I’m sure the buses were a part of that,” Vargas said Thursday.

He and the others were in Washington with Chispa, the League of Conservation Voters’ grassroots Latino advocacy program, and its “Clean Buses for Healthy Ninos Campaign.”

Since April, Chispa has worked in six states, including Arizona, to see that money from the VW settlement is steered toward replacing traditional school buses with battery-electric buses.

The money came from Volkswagen’s 2016 settlement of government lawsuits that were filed after it was discovered that the car maker had rigged its “clean diesel” vehicles to run cleaner when they were undergoing emissions tests. In addition to agreeing to repair or buy back hundreds of thousands of cars equipped with the “defeat devices,” Volkswagen agreed to pay billions to consumers and to states, which must use the money to improve air quality.

Diesel exhaust can include more than 40 toxic cancer-causing contaminants, which Chispa says endangers children and the bus drivers who are regularly exposed to the fumes. Prolonged exposure can cause coughs, headaches, lightheadedness and nausea, and can pose health risks to developing children.

Children in low-income and minority are disproportionately affected, Chispa says.

Rep. Jimmy Gomez, D-California, said help is needed in his state, which is home to eight of the 25 most-polluted cities in the U.S., according to the American Lung Association. He said his constituents, especially those in Latino communities, face a high risk of suffering from air pollution, a claim borne out by a 2011 report by the Centers for Disease Control and Prevention.

“Today over 3.6 million Latinos in the U.S. suffer from asthma, including one in 10 Latino children,” Gomez said. “Latinos are also 165 percent more likely to live in counties with unhealthy levels of particulate matter pollution.

“These numbers are not acceptable, they underscore a need for a common-sense plan to reduce air pollution, especially from the diesel vehicles used to bus children to and from school,” he said.

Dr. Sacoby Wilson, an associate professor at the University of Maryland who specializes in applied environmental health, said these pollutants can hinder a child’s ability to learn and develop. Not only are children on or near a bus at risk of exposure, but chemicals can seep into a school and put children there at risk of secondary exposure.

“So think about a child who just got off the bus and you expect them to go into that learning environment, but they may not have that capacity to learn because of that exposure,” Wilson said. “In many ways, this pollution is poison that impacts potential.”

Wilson said children and bus drivers who are exposed regularly to these chemicals have a higher risk of lung cancer, especially children who come from low-income communities who may face additional environmental hazards. Given that, he said the idea of switching from diesel to electric buses, is a no-brainer.

In Arizona, the governor’s office is working with the Department of Administration and the Department of Environmental Quality to figure out the best way to spend the $57 million, which it will get over 10 years, to cut nitrogen oxide emissions. State officials are expected to release their mitigation plan no later than mid-December.

But Vargas – who has gathered 15 friends of his friends to volunteer with Chispa – is looking beyond the December release to a plan that starts to clean the air in the long term.

“I also have a future nephew and when it’s time for him to go to school and ride the bus, I want to make sure he’s in a clean environment and I don’t want him to struggle with asthma,” he said.