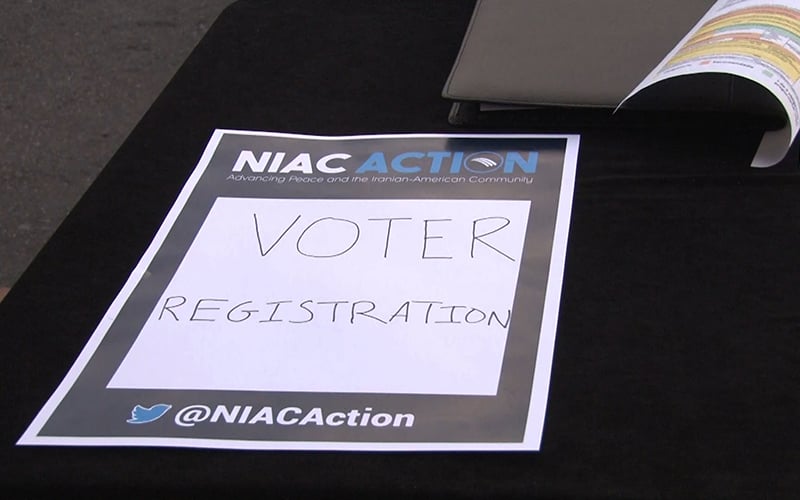 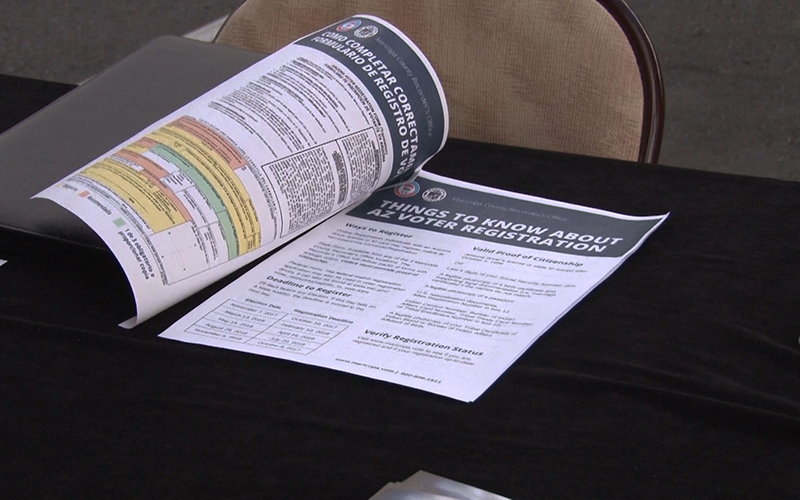 PHOENIX – On National Voter Registration Day, Ali Scotten stood outside Caspian Food Market. He held a clipboard and walked back and forth in front of the store. His goal was to register Iranian-Americans to vote, and what better place to do that than a grocery store which sells Iranian food?

Scotten is the head of the Phoenix chapter of the National Iranian American Council. He said political activity is generally low in the Iranian-American community. 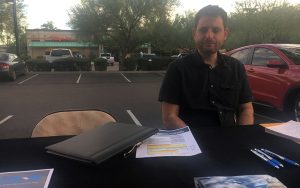 Ali Scotten, head of the Phoenix chapter of the National Iranian-American Council encourages Iranian-Americans to register to vote. (Photo by Fortesa Latifi/Cronkite News)

“I think a lot of it has to do with bad experiences coming from Iran with the political situation,” Scotten said. “So what our organization is trying to do is give Iranian-Americans the tools to engage civically with their local representatives.”

Scotten is Iranian-American himself. His mother, Azy Scotten, is Iranian. His father, Tom Scotten, is American. His parents met when his father was working for Honeywell in Iran.

Tom and Azy Scotten were both at the voter registration event Tuesday helping their son. Ali Scotten gently teased his dad. Tom Scotten had been a lifelong Republican, Ali Scotten said, until this election when he voted for Hillary Clinton. Tom Scotten laughed back, saying he didn’t want to but had to.

Ali Scotten sat at the table set up in front of the food market. On the table, there were voter registration forms, informational pamphlets and a sign-up sheet for emails from the National Iranian American Council.

Ali Scotten stood from his seat each time a car pulled into the parking lot in front of the store.

“Would you like to register to vote?” he said.

The answers varied. A few people answered “for what?” thinking Ali Scotten was canvassing for a specific candidate. Some waved him off. Some answered, simply, “no.” One woman said she was already registered and not to worry because she didn’t vote for President Donald Trump.

Ali Scotten said Trump is part of the reason the organization is making a push to increase the number of registered Iranian-American voters.

“There was a lot of anti-immigrant rhetoric during the campaign, a lot of that was actually enacted after the election of Donald Trump,” he said. “There’s been a lot of uptick in concern in our community.”

One of the main issues facing the Iranian-American community in the United States is Trump’s travel ban. The original ban limited travel from seven Muslim-majority countries, including Iran. Ali Scotten said the ban has affected his family personally. His father has fallen ill and family members who live in Iran want to visit him, but they can’t.

John Ehteshami stopped by the table to register to vote. He used to be registered, he said, but let his registration lapse for the last 15 years. Ehteshami said he was motivated to renew his registration because of the polarization of politics in the United States.

“There’s a clear left and right and I always saw myself somewhere in the center,” Ehteshami said. “I’ve voted Democrat in the past, I’ve voted Republican in the past.”

Ehteshami believes moderates like himself need to be more active in politics. But, he said, his motivation reaches beyond that.

“My number one goal in registering to vote is to bring more stability to my life, more predictability of what happens day-to-day,” Ehteshami said.

As the afternoon wore into evening, Azy Scotten went into Caspian Market. She returned minutes later with barbari and bademjoon – Persian bread and eggplant dip. The bread was freshly baked. She offered it to her husband, her son and anyone who stopped by the table.

Ahmed Momeni stopped by to talk to the Scottens. He introduced himself as Ed.

“I used to introduce myself as Ahmed and it sounded like ‘I’m Ed’ so everybody said ‘nice meeting you, Ed.’ So I decided to go by Ed.”

Momeni moved to the U.S. in 1969 when he was 19 years old. He studied architecture at the University of Texas and started his own business, Arizona Rug Company. Momeni said the right to vote is why Iranian-Americans are in this country.

“This is why we came to America,” he said. “To enjoy democracy.”