FLORENCE – The day he turned 17, Adolfo “Harpo” Celaya enlisted in the U.S. Navy.

Celaya said the fliers made it seem fun.

“At that time in Tucson, they had pictures outside that said, ‘Join the Navy and see the world,’ and they had girls,” Celaya said. “There were girls at every port and stuff like that, which I never got to see anyways.” 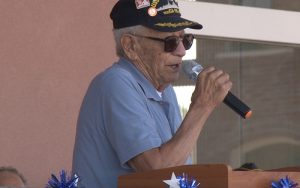 Adolfo “Harpo” Celaya was on board the USS Indianapolis when it was struck by two Japanese missiles during World War II. Officials recently named a post office in Florence after him. (Photo by Emily Richardson/Cronkite News)

Celaya was aboard the USS Indianapolis, a flagship of the 5th Fleet, during World War II. On Sept. 16, the U.S. Postal Service building in Florence was dedicated to Ceyala, now 90.

The USS Indianapolis is known for delivering the world’s first operational atomic bomb on July 26, 1945.

Several days after that, a Japanese submarine fired two torpedoes that hit the USS Indianapolis. Celaya woke up to the boat on fire.

“You hardly had any time to think. When I woke up … I just ran to the back, everybody seemed to be on fire,” he said. “I just went to the back, and I was just lucky that I got to the back. When I jumped off, we were probably about, I would say two stories high.”

The boat sank in 12 minutes.

Celaya was among the survivors who spent four days and five nights in the water before they were rescued.

“(Those days) were kind of rough,” he said. “When you heard the sharks attacking one of the sailors … you didn’t know when the sharks were going to attack.”

When Celaya returned to the United States, he re-enrolled in school and played on the Florence High School’s basketball team.

“It helped me a lot to come back to school” he said, because it helped with his Post Traumatic Stress Disorder.

To name the post office after Celaya, Arizona Congressman Paul Gosar, R-Prescott, had to get Congress to pass a bill. At the dedication event, Gosar thanked Celaya for the sacrifices he made.

“Harpo Celaya is a true hero beloved by his hometown, right here in Florence,” Gosar said.

Michael K. Quintana, the Florence postmaster, said he is proud that he got to help celebrate Celaya.

“It was an honor for us to be able to honor Mr. Celaya in this way,” Quintana said.

Celaya said he was happy to be recognized by his hometown and even happier that his family made the event.

“They all came from San Jose, and they came from California,” he said. “It’s something I’ll probably take with me for the rest of my life.”

“Now at 90 years old, the name Harpo will still be on this building. Thank you and God bless.”