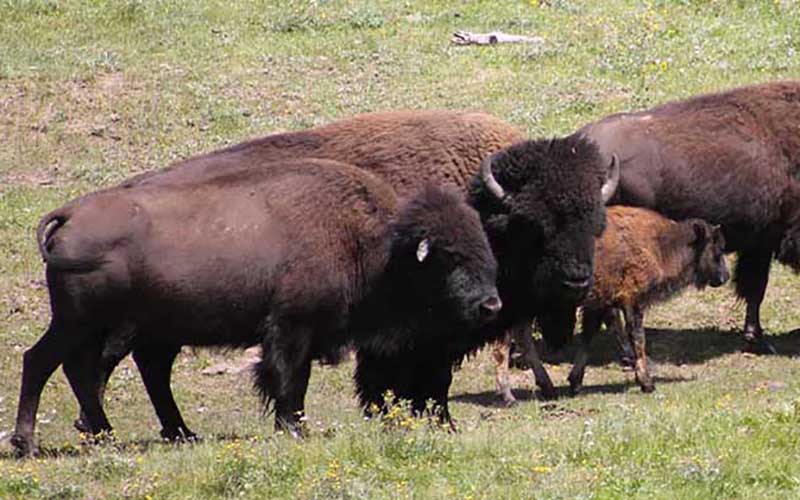 Some of the herd of bison-cattle hybrids that are causing environmental damage on the North Rim of Grand Canyon National Park, where they cannot be hunted. But two proposals – one a bill, one a National Park Service plan – would allow for reductions in the herd, including hunting. (Photo courtesy National Park Service)

WASHINGTON – Plans to reduce the size of a destructive herd of Grand Canyon bison took another step forward this week, when a House panel approved a bill to require culling, just weeks after the National Park Service approved its own plan.

Rep. Paul Gosar, R-Prescott, said his bill is needed as a backup to the government plan, which he expects will be “mired in litigation.”

Some environmentalists have balked at the plans, which call for hunting as well as nonlethal herding to reduce the numbers. But everyone agrees that the animals are damaging the park, to which they are not native, and have to be managed.

“We feel that the population number is too high,” said Shelly Shepherd, spokeswoman for the Flagstaff office of the Arizona Game and Fish Department. “They are causing damage to archeological sites, water sites, soil and vegetation.”

The Park Service plan approved Sept. 1 would reduce the herd from its current population of as many as 600 animals to fewer than 200 over the next three years through a combination of methods. Those could include finding skilled professionals to shoot the animals or rounding up and transferring them to other places, depending on the season and other factors, said Jeff Olson, an acting spokesman for the Grand Canyon National Park.

Earlier versions of this story misspelled the names of two sources. Jeff Olson is the Grand Canyon’s acting chief of communications and Shelly Shepherd is a spokeswoman for the Arizona Game and Fish Department in Flagstaff. The story also mischaracterized how people will be selected to participate in the culling: The service will seek skilled volunteers for the operation. The story here has been corrected, but clients who used a previous version are asked to run the correction that can be found here.

Olson said the next step for the Park Service and partnering agencies is to come together and finalize guidelines for the reduction of the herd, but that public interest in “volunteering” to cull the herd has been high.

“There are a lot of people asking when they can sign up to volunteer,” he said. “As soon as we are able to work out specific operational guidelines for herd reduction we will reach out to the media, and it will also be on our website.”

Olson chafes at the term “hunt,” being careful to call the culling a volunteer effort with meat from the harvest likely going “to volunteers, tribes and food banks” with “hides and heads going to tribes or government agencies for educational use.”

“There are a lot of words that are being used in the media and by opponents that do not apply here,” Olson said. “Sharp-shooter being one, and hunting being another – these are highly skilled professionals.”

Gosar disagreed with part of the plan Olson laid out, saying officials “need to ensure that the hunters can keep the meat, head, hide and horns.” His bill – which was co-sponsored by Reps. Trent Franks, R-Glendale, David Schweikert, R-Fountain Hills, and Tom O’Halleran, D-Sedona – would mandate a plan from the Park Service.

Gosar said that putting a bison management requirement into law will put the project on solid legal ground. He also said it will give state agencies a bigger role in what he said has been inefficient and mismanaged plans from “out of touch Washington bureaucrats in the past.”

Gosar said it is time for the Park Service to “begin to deal with the overgrown bison population.” The bill was added as an amendment to a hunter’s rights bill that was given preliminary approval Wednesday by the House Natural Resources Committee.

Shepherd said the Grand Canyon herd is actually a bison-cattle hybrid that was managed by Arizona Game and Fish through annual hunts in the House Rock Wildlife area. But the “cattalo” began moving into the national park where they could not be hunted around 2012.

“As soon as they crossed over to national park land, we were unable to cull the heard, or manage them,” she said.

With no management, the population boomed. The Park Service estimates that the 400- to 600-animal herd could grow to as many as 1,500 in the next 10 years if no action is taken.

While they agree that action needs to be taken, environmental groups are not sure hunting is the best solution.

“The plan, outlined in a new Park Service report, would permanently maintain a cattalo herd inside the park to provide big game opportunities both inside and outside the park,” said a June statement from Public Employees for Environmental Responsibility after the proposal was unveiled.

Jeff Ruch, executive director of Public Employees for Environmental Responsibility, said then that the plan would turn the Grand Canyon “into a game farm managed for the benefit of Arizona Game and Fish … slaughter should not become a routine park wildlife management strategy.”

Sandy Bahr, a spokeswoman for the Grand Canyon chapter of the Sierra Club, said the club is not anti-hunting – just anti-hunting in national parks. Bahr said lethal culling goes too far and is “insulting” to people who have been working toward other options.

While Ruch is no fan of a lethal solution, he said he has a bigger problem with both plans – that they would leave any herd in the park at all. Allowing 200 bison to remain would only prolong destruction to the Grand Canyon, he said.

“The current positon they have taken, as I like to say, is that they want to remain ‘a little bit pregnant’ – they want to cull them but not kill them,” Ruch said. “This kind of approach could actually cause more damage, because it causes them to retreat into more secluded, more fragile areas.”