National nonprofit Americans for the Arts released a report indicating that the arts industry generated more than $400 million and pumped it into Phoenix’s economy in fiscal 2015, up from about $300 million in 2012, when it conducted the last study.

More than half of that, $235 million, came from event-related spending – or money that does not go directly to the venue. 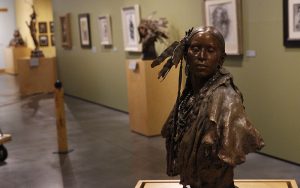 Scottsdale’s Museum of the West focuses on Western art and culture of 19 Western states and parts of Canada. (Photo by Charlie Clark/Cronkite News)

“Their audiences spend money on arts-related events that generate revenue for other local businesses, including restaurants, retail stores and hotels,” Phoenix Mayor Greg Stanton said at an event revealing the findings.

“That has a phenomenal ripple effect throughout our communities because what do they do with their money? They go and they spend it,” said Mike Fox, director and CEO of Scottsdale’s Museum of the West.

While the arts have an impact on the economy, Fox said they also bring the community together.

“I believe the arts are essential to one’s life way,” Fox said. “It is a way for all of us to gain appreciation of different cultures, different values and different traditions.”