An existing stretch of border fence wall on the border near Brownsville, Texas. In the past two weeks, two Arizona companies have been awarded contracts by Customs and Border Protection to build prototypes of President Donald Trump’s promised wall for length of the border. (Photo by Mindy Riesenberg/Cronkite News) 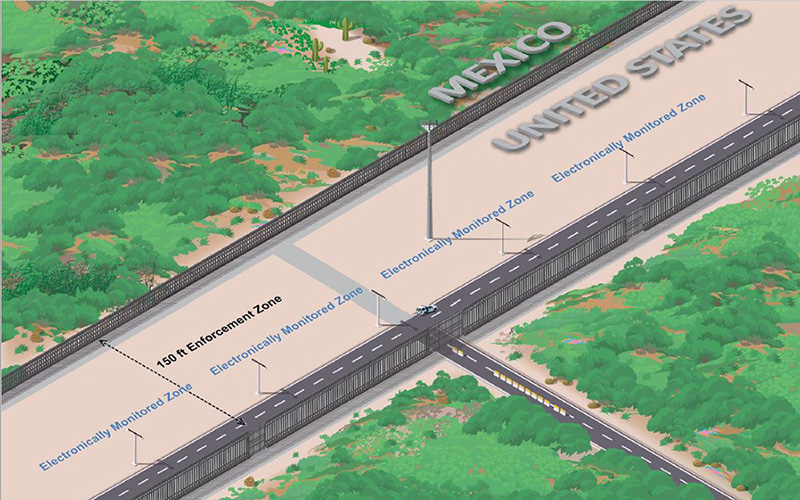 WASHINGTON – A Hispanic-owned construction company from Sierra Vista won one of four contracts awarded this week to build prototypes of President Donald Trump’s proposed border wall with Mexico, the second round of awards in as many weeks.

KWR Construction Inc. was chosen by U.S. Customs and Border Protection to build a demonstration section of wall near San Diego using materials other than concrete. The award comes a week after CBP awarded four contracts for wall prototypes made of concrete, one of which was won by Fisher Industries of Tempe.

Construction on all the prototypes should begin this fall after contracts are finalized, the agency said. It said that each contract awarded Thursday was worth between $300,000 and $500,000

KWR did not immediately respond to a request for comment, but one official there told Cronkite News when bids went out in April that despite some backlash from the Latino community for bidding on the wall, “building barriers on the border is nothing new” for the company.

Building a border wall with Mexico, a wall he said the Mexicans would pay for, was a centerpiece of Trump’s presidential campaign. He signed an executive order on Jan. 25, just days after taking office, authorizing construction of a wall.

Mexican officials have repeatedly said they will not pay for a wall on our 2,000-mile shared border and initial phases of the project, at least, will be funded with U.S. tax dollars.

Construction of the prototypes will be paid for using a $20 million wall fund that was already in the fiscal 2017 budget. The Trump administration is seeking $1.6 billion in the fiscal 2018 budget for the next phases on construction of the wall, which could ultimately cost $21.6 billion, according to one Department of Homeland Security security. Another estimate, by minority staff on the Senate Homeland Security and Governmental Affairs Committee, said the final cost could be as high as $70 billion.

The contracts awarded this week call for construction of four non-concrete wall prototypes, 18 to 30 feet high, designed to deter border crossing while providing an “innovative perspective” on the use of materials that could be applied to wall construction in the future.

Despite the progress on the contracts, environmental groups continue to push back against the project, which they charge will harm plants and animals in the border region.

The Center for Biological Diversity said Wednesday that it is amending an April lawsuit against construction of the wall projects. That suit challenges the constitutionality of Homeland Security’s ability to waive environmental rules along the border to speed the project.

Brian Segee, a senior attorney for the center, said in prepared statement that the use of waivers by DHS shows a “dangerous disregard” for the environment.

“Trump is willing to throw environmental protections out the window to fulfill his divisive and destructive campaign promise,” Segee’s statement said. “What’s to stop him from using this lawless approach to wreck wildlife refuges and beautiful public lands all along the border? We need to halt these unconstitutional waivers once and for all, here in San Diego.”

The center is not the only one opposed to the wall. KWR Construction General Manager Al Anderson said in April that the company has faced backlash for its work on border projects in the past, including crews on site having rocks thrown at them from the Mexican side of the border. But that would not deter the Hispanic-owned firm from bidding, he said then.

“If the government’s going to build a wall, we want to do it,” Anderson said.

W.G. Yates and Caddell were also awarded two of the contracts last week to build concrete prototypes of a wall.