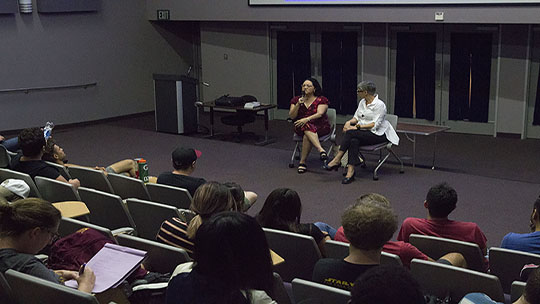 TEMPE — A film about a young Latina in Los Angeles torn between her personal ambitions and her conservative family’s expectations opens the door to a conversation about the need for the authentic portrayal of Latinas in film.

Arizona State University students, faculty and community members gathered to view a special screening of “Real Women Have Curves” at Sun Studios of Arizona in Tempe followed by a question-and-answer session with playwright, Josefina López, whose work the movie is based on. Although the film debuted more than 15 years ago, it speaks about themes still relevant today, including the current portrayal of Latinas in movies and television.

Lopez drew from her own life when she wrote the play “Real Women Have Curves” and found ways to address what she considers is the misrepresentation of Latinos.

“(The film) is one of the very few authentic representations of Latina women. Most stories are not written by women and they’re not written by Latinos. Latinas are hot señoritas, they’re either sex servants or they’re house servants, but that’s about the range that Latinas get. Occasionally they get to be Cholas,” she said. 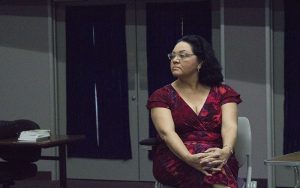 Josefina Lopez listens to members of the audience express their thoughts on the film. (Photo by Lysandra Marquez/Cronkite News)

“I just remember thinking how dignified my parents were because they didn’t have an education, but they were really hardworking people. I felt like it was so unfair that Latinos were presented that way when my parents were great role models,” she said. “When I was growing up, I wanted to change that. So, I became a playwright.”

A study published in 2016 by the USC Annenberg School for Communication on diversity in entertainment looked at the sexualization of female characters based on race and ethnicity. The study concluded Latinas were among some of the most likely to be represented with some nudity, sexualized attire, or referenced as attractive.

Wednesday’s event was moderated by Tiffany Lopez, director of the School of Film, Dance and Theater at ASU. She also expressed that authentic representation of Latina women is something that is still missing.

“I think that we don’t have a range of reflection of different cultures and different peoples, that’s the impact, you’re looking at a giant part of the population that is missing in the media, and in visual art, from film and television to digital production to live theater,” Lopez said.

Amanda Cardoza, a 20-year-old film student at ASU who was at the screening, said she doesn’t see herself currently represented in film and expressed concerns about perpetuated stereotypes. 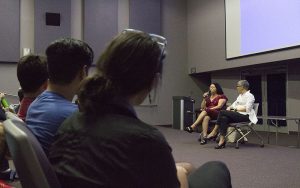 Josefina Lopez answers questions from the audience. Pictured on her right is Dr. Tiffany Lopez, who moderated the event. (Photo by Lysandra Marquez/Cronkite News)

“She has that sexual body, and I feel like that’s still what people want to see. If more actresses are coming out like that, I don’t think it’s going to help the average looking regular Latina girl that’s not sexualized,” she said.

Lopez said the school seeks to address the needs of young filmmakers, like Cardoza, by fostering and providing the opportunities for them to network with established voices like Josefina Lopez.

“I think our current generation, they’re taking note of that and talking about it and wanting to change things and Josefina Lopez really, 15 years ago, what you can see in hindsight is how she was very much at the cutting edge of the conversation,” Tiffany Lopez said.

“Any artist entering the profession has to really be able to have clarity about the stories they’re wanting to tell,” Lopez said. “They have to be prepared to be able to sit at the table and collaborate with other people and work through the difficult and challenging conversations that will inevitably come up about the work that you’re making that involves representing Latinos.”

CORRECTION: This article has been modified to reflect statements made by Tiffany Lopez.