“I am here today to announce that the program known as DACA that was effectuated under the Obama Administration is being rescinded,” Sessions said.

As the news about DACA broke, universities and colleges across Arizona sent official statements to their students. 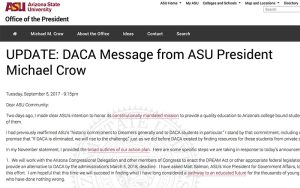 President Dr. Michael Crow of Arizona State University promised “if DACA is eliminated, we will rise to the challenge.” Crow outlined six steps ASU will take in response to Trump’s DACA decision including “facilitating legal advice for and to our students.”

Fallon Leyba, an ASU junior and Chair of the Students for a Democratic Society, wasn’t pleased with Crow’s response.

“It’s not enough, that’s for sure,” Leyba said. “We’ll only be satisfied when he promises to keep (Immigration and Customs Enforcement) off campus and he does everything in his power to make sure everyone is able to continue their education here.”

Leyba and other student members of the organization are planning events which, they hope, inspire further action from Crow.

Oscar Hernandez, an ASU DACA recipient and member of Undocumented Students for Education Equity, said he questioned Crow’s decision to use email to send the statement about supporting DACA students.

“It’s a very sensitive subject that could impact people’s lives,” Hernandez said, “and it felt insensitive just to get an email.”

“I think he’s doing the best that he can, considering that we’re living in a Republican state and that the university depends a lot on the public funding that it receives from the state,” he said. 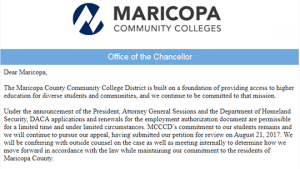 “We are committed to helping all people — regardless of their background — achieve their academic goals and fulfill their potential,” said Harper-Marinick.

Santos is a 25-year-old freshman at Mesa Community College. He founded Mesa Undocumented Students Thriving, a student group known as MUST. As a DACA recipient himself, he said he was comforted by the chancellor’s statement.

“I was super happy to see that the chancellor was in favor of me and my classmates,” Santos said.

And the support, Santos said, hasn’t only come from the college’s administration.

“Because of the political climate we’ve seen, more students want to stand up and fight back,” he said. “I feel that DACA recipients grew up with this fear and it was normal. It grew with us into adulthood, but now that we’ve seen a lot of other students speak out and fight back, we feel other people who were in the shadows are coming out.”

Santos compared Trump’s decision to “wind down” the DACA program to a break-up.

“It feels like a break-up, like you’re being pushed away and you love this country. You grew up saying the Pledge of Allegiance. I grew up as a Boy Scout. I feel very involved in our community and very connected to it, so it’s a little bit depressing,” he said.

“That one act of resilience and unity from our chancellor just gives us that warm feeling that some of the people out there care,” he said. 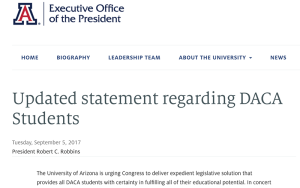 University of Arizona statement on DACA. (via arizona.edu)

The University of Arizona also released a statement, saying in part “it is our goal to make education accessible to all students and lifelong learners.”

Stephanie Morales, a recent UA graduate in Public Health and Mexican American studies, said she appreciates the sentiment but wonders what the university will do moving forward.

“My side is just like, okay, well, make these statements but moving on forward, will this translate into action?” Morales said.

Edder Diaz Martinez, an ASU student and DACA recipient who has lived in the United States since he was five years old, echoed Morales’s concerns.

“If DACA were removed and we’re in the middle of a semester, does that mean we’re going to get billed for out-of-state tuition?” Martinez said. “Are we going to have to be afraid of ASU police if we encounter them? Are they going to accept our student ID’s without having any other form of ID’s? Are we safe from ICE on campus?”

“These are the kinds of things we have to face every day. We hope to have a campus where we can say, at least here, we’ll be fine,” he said.