“If we got to shut down our government, we are building that wall,” the president said.

At the rally, Trump gave a stern message directed to Democratic lawmakers in the Senate who have shot down the idea of a $1.6 billion border wall plan — a plan that was approved by the House of Representatives in July.

Eder Rosas Pimentel, a Mexican immigrant and DACA recipient, wants to make his story clear. A story, he said, is all too common within the Latino community in Arizona.

“If something happened with one undocumented immigrant that did something horrible, somehow it’s the fault of all 12 million people,” he said.

“The wall is bogus,” he added.

“My parents are both residents because my sister is a veteran. My sister was able to adjust my parents and both of my other siblings are all U.S. citizens. So I am the only one in my family that is a DACA recipient,” Pimentel said. 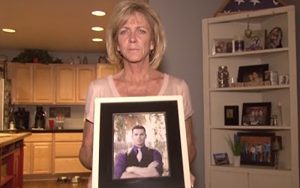 Mary Ann Mendoza holds a picture of her son, Sgt. Brandon Mendoza who was killed by an undocumented immigrant in 2014. (Photo by Alex Valdez/Cronkite News)

However, Valley mother Mary Ann Mendoza, has made it her mission to fight in favor of a border wall after her son, Sgt. Brandon Mendoza, was hit head on by an undocumented immigrant.

“A border will is necessary to keep Americans safe,” she said. Mendoza started the organization Advocates for Victims of Illegal Alien Crime after her son’s death and she is praising the president and his efforts to get the wall built.

For Mendoza, advocating for a border wall is personal. Which is why she hopes the approval of a $1.6 billion spending bill in the House gets the same backing Senate.

Mendoza said no one should lose a son the way she did. “All it would take is for their family to be affected by illegal crime for them to understand where I am coming from.”