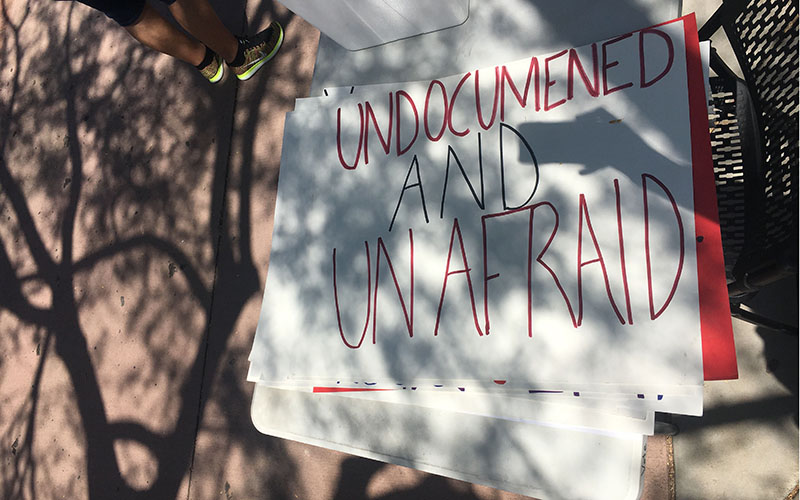 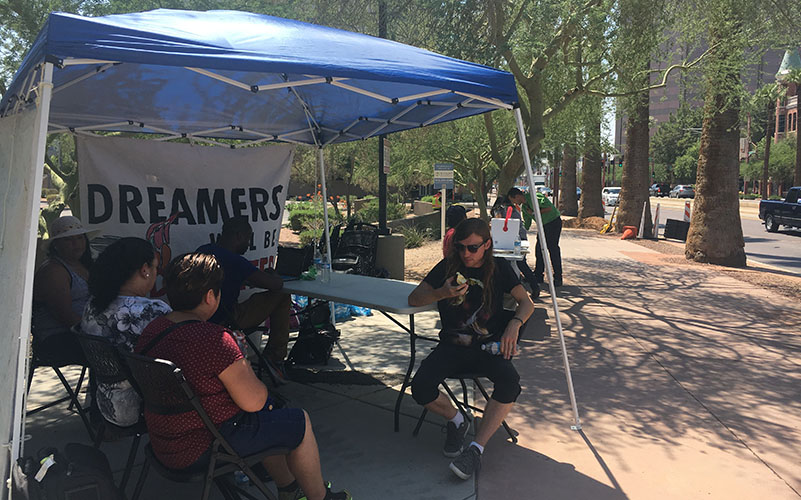 Meanwhile, people walked by the protest, heading into ICE for their appointments or check-ins.

DACA, which was enacted by the Obama administration in 2012, gives protection from deportation and permission to work to immigrants who were brought to the U.S. before the age of 16. To qualify, they must be at least 15 years old, pass a background check, have a clean criminal record, have lived continuously in the U.S. since June 15, 2007, and either be currently in school, a high school graduate or G.E.D. recipient or an honorably discharged military veteran.

For his part, President Donald Trump has presented conflicting opinions on DACA. As a candidate, he said he would “immediately terminate” DACA but seemed to soften on the idea soon after taking office. As president, he has called DACA “one of the most difficult subjects I have” and said he would “deal with DACA with heart.”

A decision on DACA is expected to be reached soon but, in the meantime, protesters are making their voices heard.

Karina Ruiz is one of them. A DACA recipient herself, Ruiz was brought to the U.S. from Mexico City when she was 15 years old. After DACA was passed and she was deemed eligible for in-state tuition, Ruiz was able to finish her bachelor’s degree in biochemistry. She was also able to get a driver’s license and live without the imminent threat of deportation.

Petra Falcon, head of the Latino voter outreach group Promise Arizona, said that fear is returning for many DACA recipients.

“They’re very, very scared,” Falcon said. “Because for five years, they have lived a whole different life. They’ve lived a life with the freedom to walk outside and not be fearful that somebody is going to pick them up and deport them. They can go to school, they can go to work. It’s just been a different world for them.” 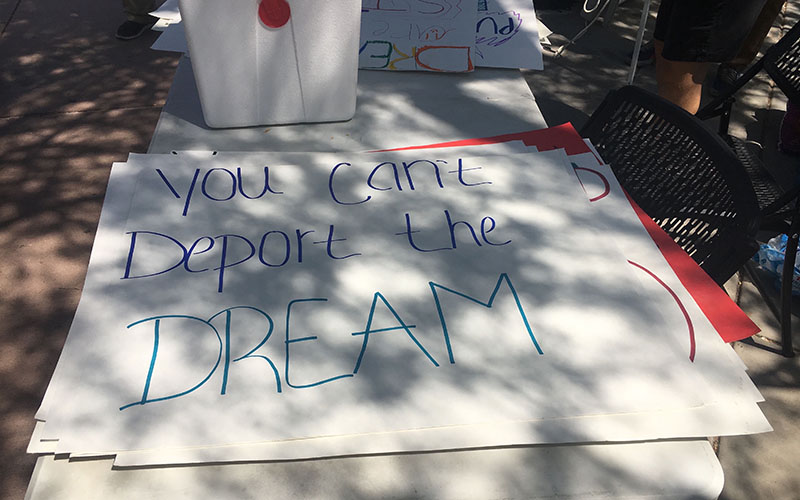 “You can’t deport the dream” poster at the protest. (Photo by Fortesa Latifi/Cronkite News)

Michael Ingram is one of the people who protested outside of ICE. He is not a DACA recipient himself but said he wanted to show support.

“DACA shouldn’t be ended,” Ingram said. “But I think DACA will end. We have a political climate in this country where people are more than willing to end these things.”

While DACA hangs in the balance, Falcon said entire families are facing uncertainty. Sometimes, DACA recipients are the main breadwinners in their families.

“What is going to happen to them?” Falcon said.

Ruiz said she won’t go back to living the way she did before DACA.

“I am not willing to go back to the shadows,” she said. “My plans are continuing, my life is continuing. If my work permit is taken away, that doesn’t take away my humanity and my dignity.”